RCW: Running in the Right Direction 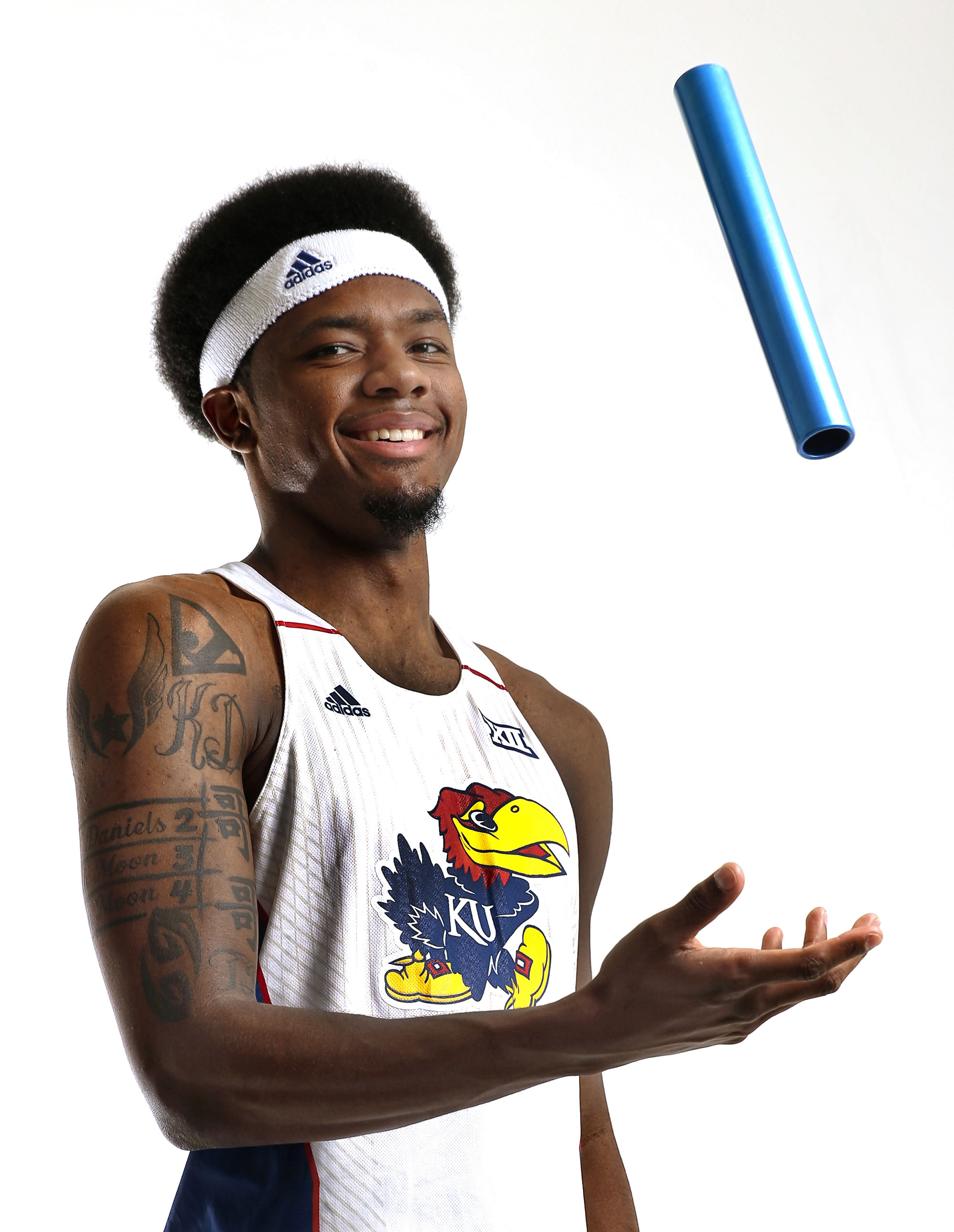 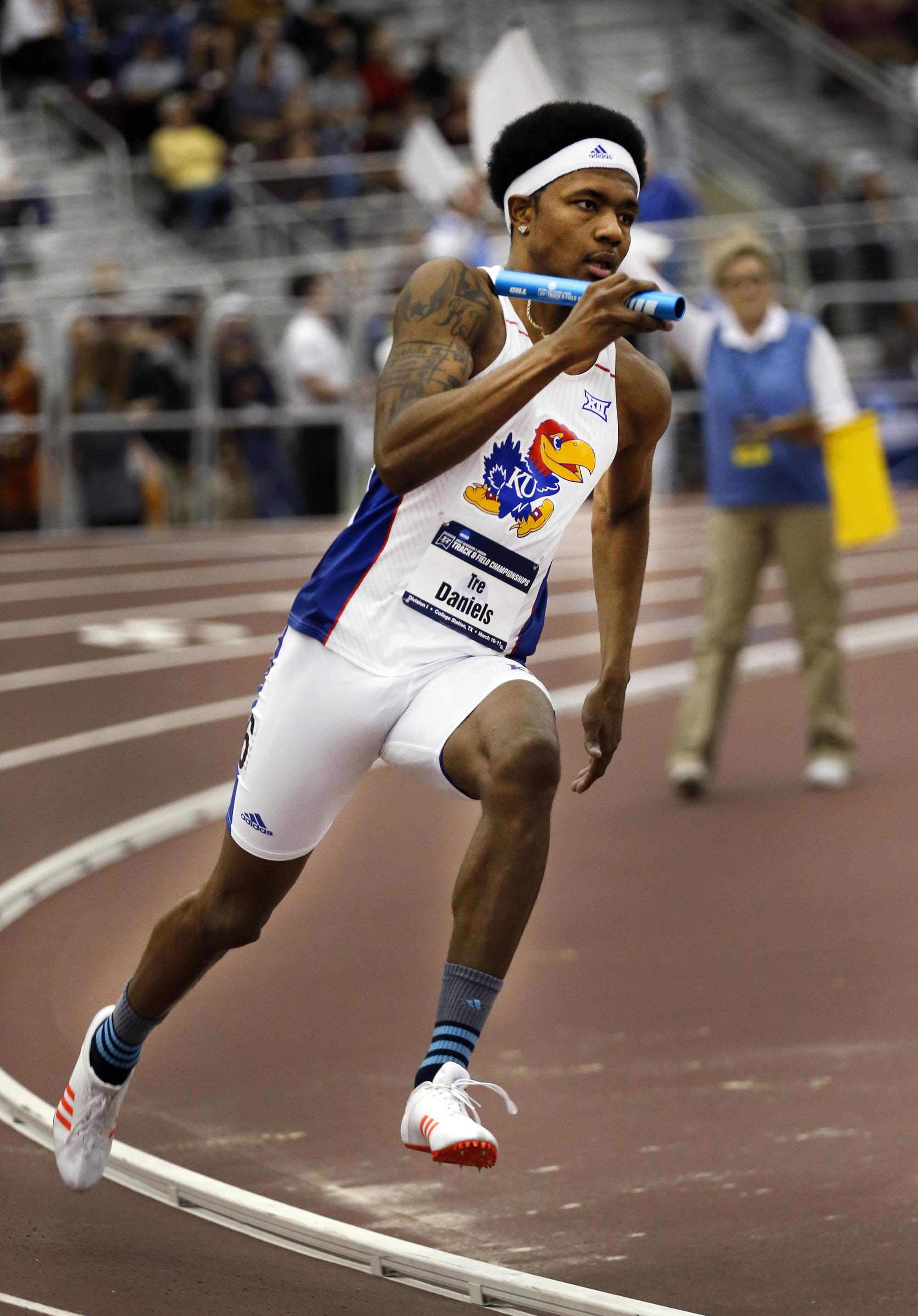 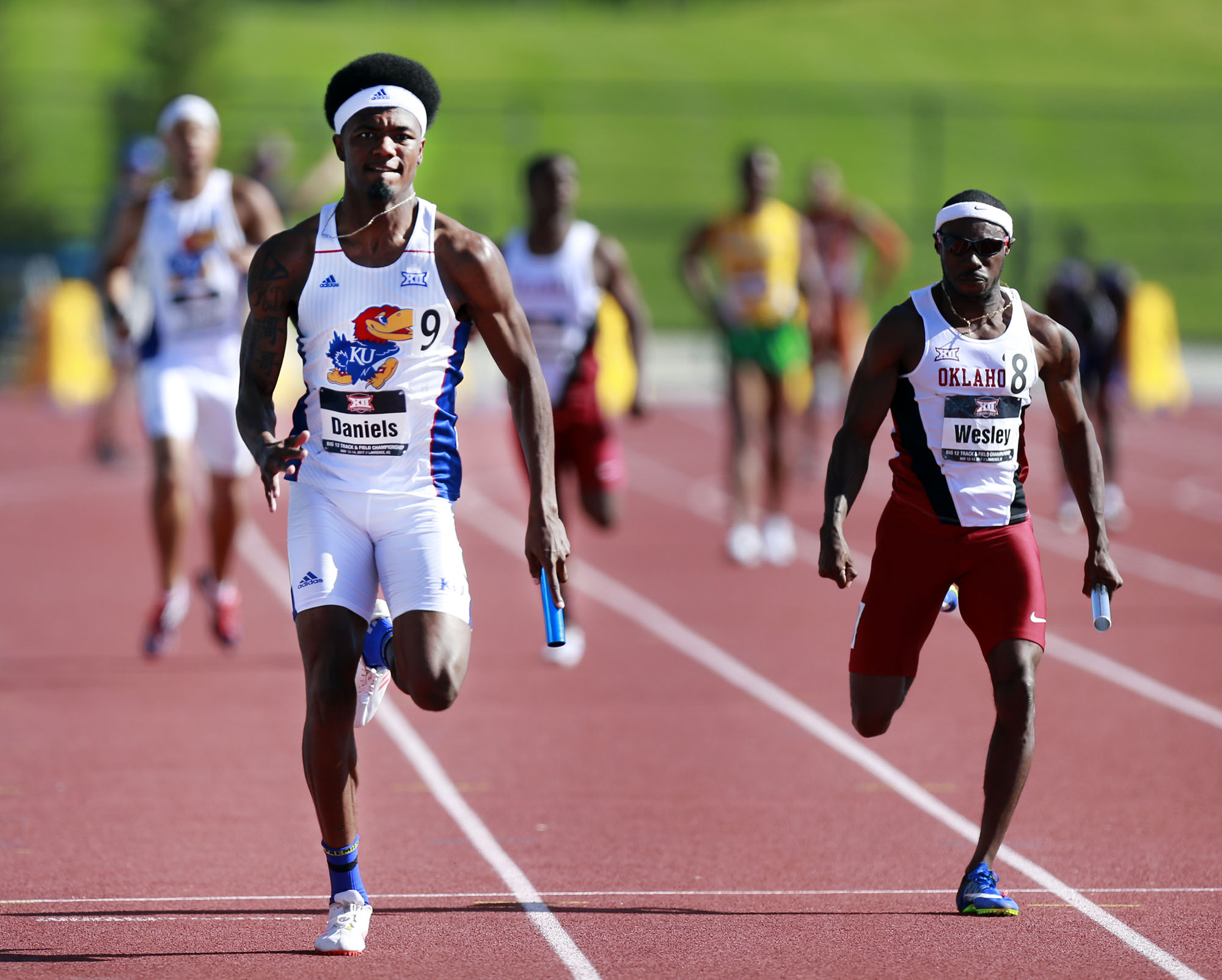 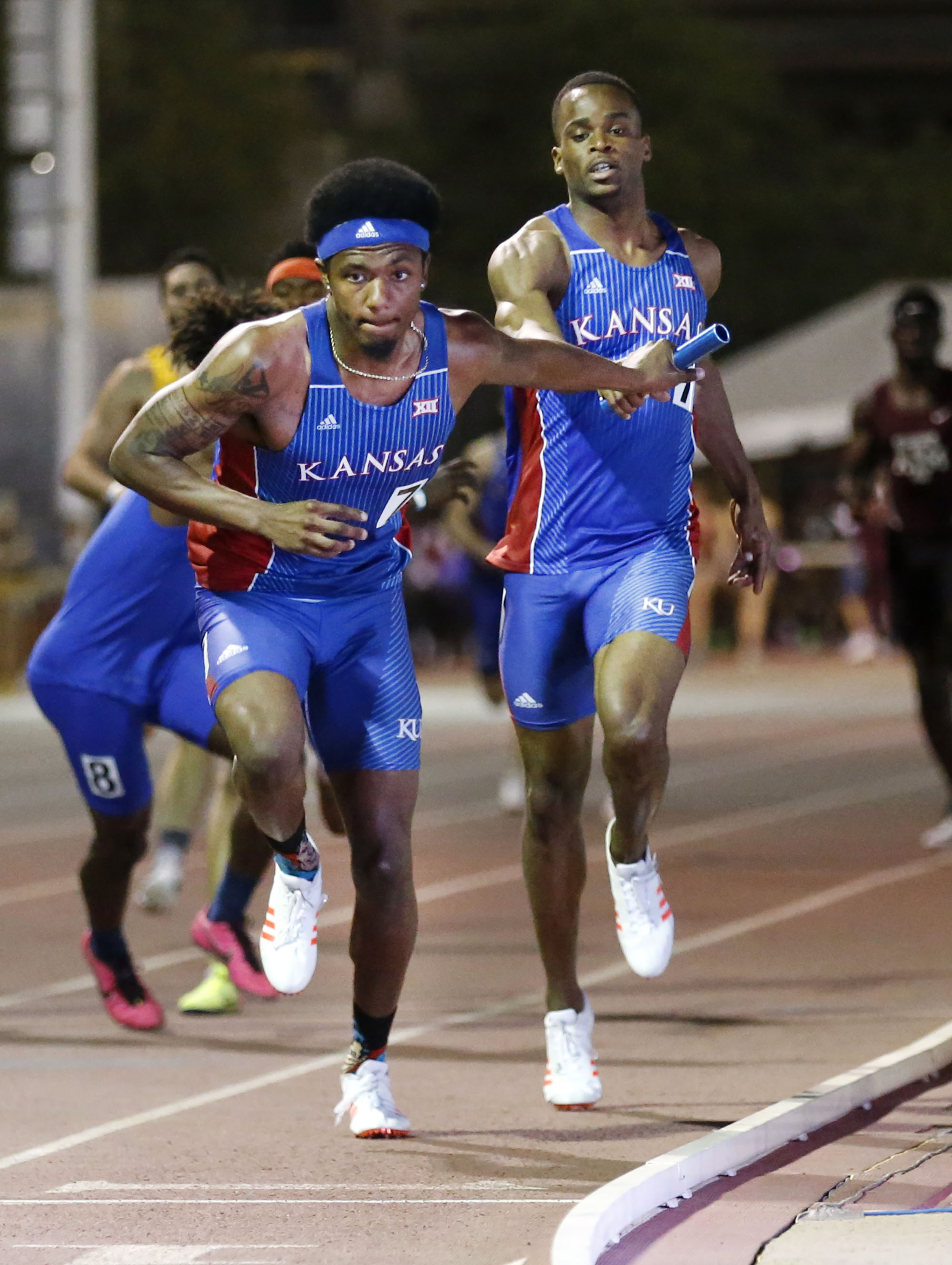 It is a chain of decisions that leads a person to where they are now. Maybe his or her life would have turned out differently if he or she had decided to go to another school, or if he or she had moved to a different state. Nobody will ever know.

However, for Tre Daniels, this chain of events led him to a career as a student-athlete at the University of Kansas. While nobody knows how things would have turned out had he made different choices, Daniels is satisfied with the way his life is going.

Daniels is a senior on the Kansas track & field team where he is a member of the 4×400-meter relay team. To get there, his road was bumpy, but worthwhile.

Daniels lived in Kansas up until eighth grade. At that point, Daniels, his three siblings and his mother moved to Chicago, where Daniels joined the football team at his school.

The football team suited many of Daniels’ needs; it was a team sport, he felt like he belonged to a family and he was good at it. The one need, however, that the team didn’t cater to him was his competitiveness.

“The football team I played on in Illinois wasn’t very good,” Daniels said. “It was me and two or three other teammates who really wanted to be good and we were training all the time. We were practicing in the offseason, we were always with our coaches watching film and stuff, but I noticed that what we were doing wasn’t changing the team.”

However discouraged he was becoming, football was not the only sport Daniels participated in while living in Illinois. He played AAU basketball for some time, and during the summer, he would run track. Ultimately, the realization that his football team wasn’t very good pushed him in the direction of track.

Daniels knew he would miss the team aspect of football. So he found a way to have both the team aspect and the individual ability to work and improve on in a sport – the 4×400-meter relay.

“In track, I control if I want to be good,” Daniels said. “If one of my teammates doesn’t want to work hard, that’s on him, and he is not going to run fast. But if I work hard in track, and I train to do what I’m supposed to do, I will be fast and I will be able to compete, and it doesn’t matter what he does. So that’s one reason why I chose track over other sports.”

Daniels made the decision to focus solely on track & field while still living in Illinois. But in his sophomore year, he and his family moved back to Kansas. It wasn’t necessarily a Jayhawk territory, though. Daniels and his family moved to Manhattan, Kansas, where he went to high school at Manhattan High. The school is known for producing Division I-caliber athletes, and won the conference and regional championship seven-straight times.

Daniels kept running, and he knew he was good at it. But his senior year had started, and he hadn’t heard from any schools about continuing his track & field career at the next level. His coaches were talking to him about looking into junior colleges and Division II schools, but Daniels yearned for high-level competition.

Two of his fellow senior teammates had signed with KU already, but Daniels still wasn’t sure about what he was doing after his prep career would come to a close. That is until Manhattan High’s original meet, which is a state-qualifier for high schools. One of the KU coaches saw Daniels run during that particular meet, and set up a meeting with the track & field staff and an official visit in Lawrence for him as soon as possible.

The meeting and the visit were both a success, and soon after, Daniels was on his way to KU.

Daniels’ biggest incentive to run has always been for the competition. While he doesn’t necessarily love running, one thing he does love is to beat the competition when he is running, and that feeling is worth everything to him.

“I like the feeling of beating somebody in the 400 because it is really hard to run the 400,” Daniels said. “So when you beat somebody, you just have a different feeling because everybody is hurting the same, but you were able to push through it more than the next person.”

It is that competitiveness that has allowed Daniels to accomplish great things while competing at KU over the past three and a half years. So far, his favorite accomplishment has been when his team won the 4×400 at the Big 12 Conference meet during his sophomore year. On top of that, he helped the relay team place first in the KU-KSU-WSU Triangular and was also part of the team that won the Kansas Relays’ 4×400 the same year.

During his junior season, he – with his teammates Ivan Henry, Jaron Hartley and Strymar Livingston – helped break the indoor school record in the relay at the A. Wilson Invitational with a time of 3:05.57 and placed 11th in the 4×400 at the NCAA Indoor Track & Field Championships to earn Second Team All-America honors. These are just a few small examples of the big accomplishments Daniels has been able to achieve at Kansas.

One of his favorite memories of being a Jayhawk didn’t happen on the track, however. It happened when he was given his letter jacket.

“You see all the upperclassmen with it, and nobody else with it,” Daniels said. “Getting a lettermen’s jacket was cool.”

Even with all of these achievements in track, Daniels also takes pride in being a student. He knew he wanted to go to college, and he knew sports was one way of doing that. Like any other college student, Daniels studies and still does homework but he has found his own techniques to deal with the pressure of being a Division I student-athlete.

“I will set a time, (where) I will sit somewhere and do homework for one hour, and then I will get up and do something else for like 30 minutes, and then I will come back do homework for exactly another hour. If I know when I’m starting and when I’m finishing it, it makes it a little bit easier for me because I know that in one hour, I will be able to have a break,” Daniels said of his study habits.

And Daniels certainly knows how to enjoy his break time. He will relax, play some video games and/or watch Netflix. A typical college student. Because, ultimately, student-athletes are typical college students, just with an added twist. Daniels understands he can’t get overwhelmed, otherwise he will burn out both academically and athletically.

As far as the future goes, Daniels will graduate in May with a degree in communication studies While he still aspires to run professionally, Daniels  already has an internship lined up for the summer. There, he will have the opportunity to learn more about the administrative side of athletics, since he has been on the athlete side of the business for so long.

“I want to work in an athletic department. My end goal would be to be an athletic director,” Daniels said of his future ambitions. “I would have to obviously keep going to school, but I definitely want to be involved in the other side of athletics.”

But that is still months away, as Daniels is only getting started with his final track & field season at KU. Daniels’ 4×400 team, comprised of Ivan Henry, Jaron Hartley, Isaiah Cole and Daniels, was added to the field for indoor nationals in College Station, Texas, and hopefully will produce good results for the Jayhawks. After that, Daniels has great expectations for his final outdoor season in the Crimson and Blue before moving on to the next stage of his career, his life after being a student-athlete.