RCW: Swimming toward a cause 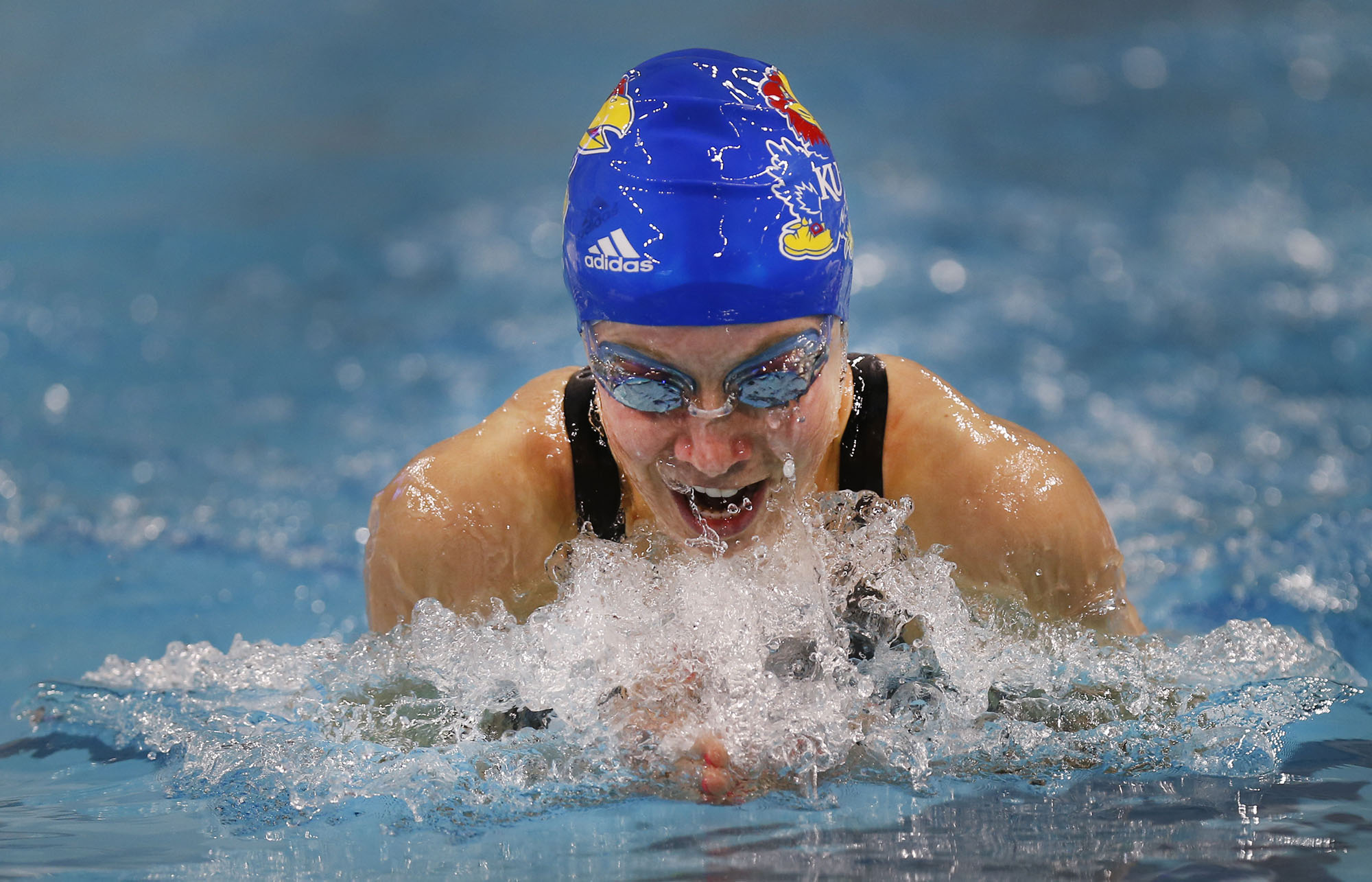 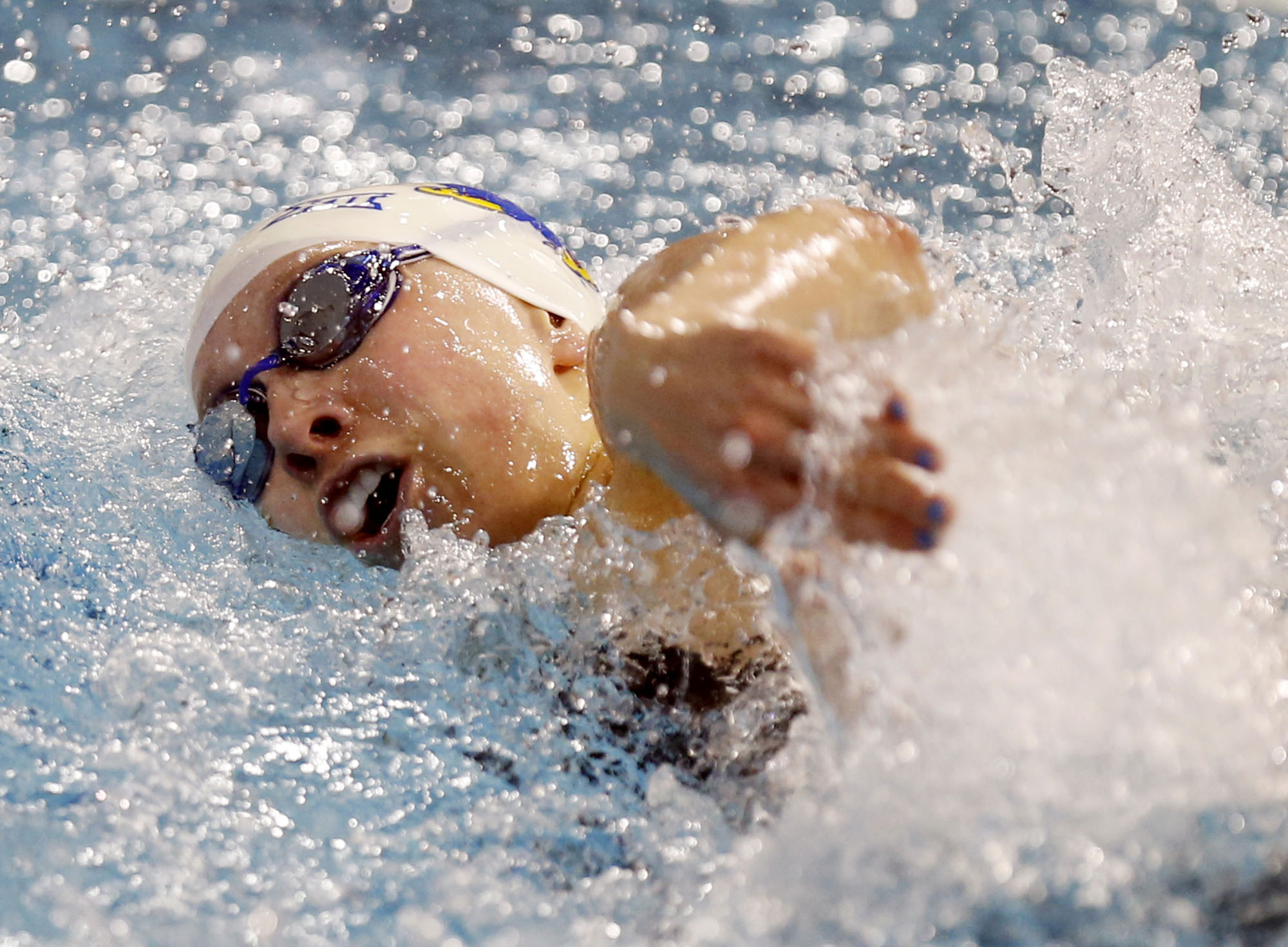 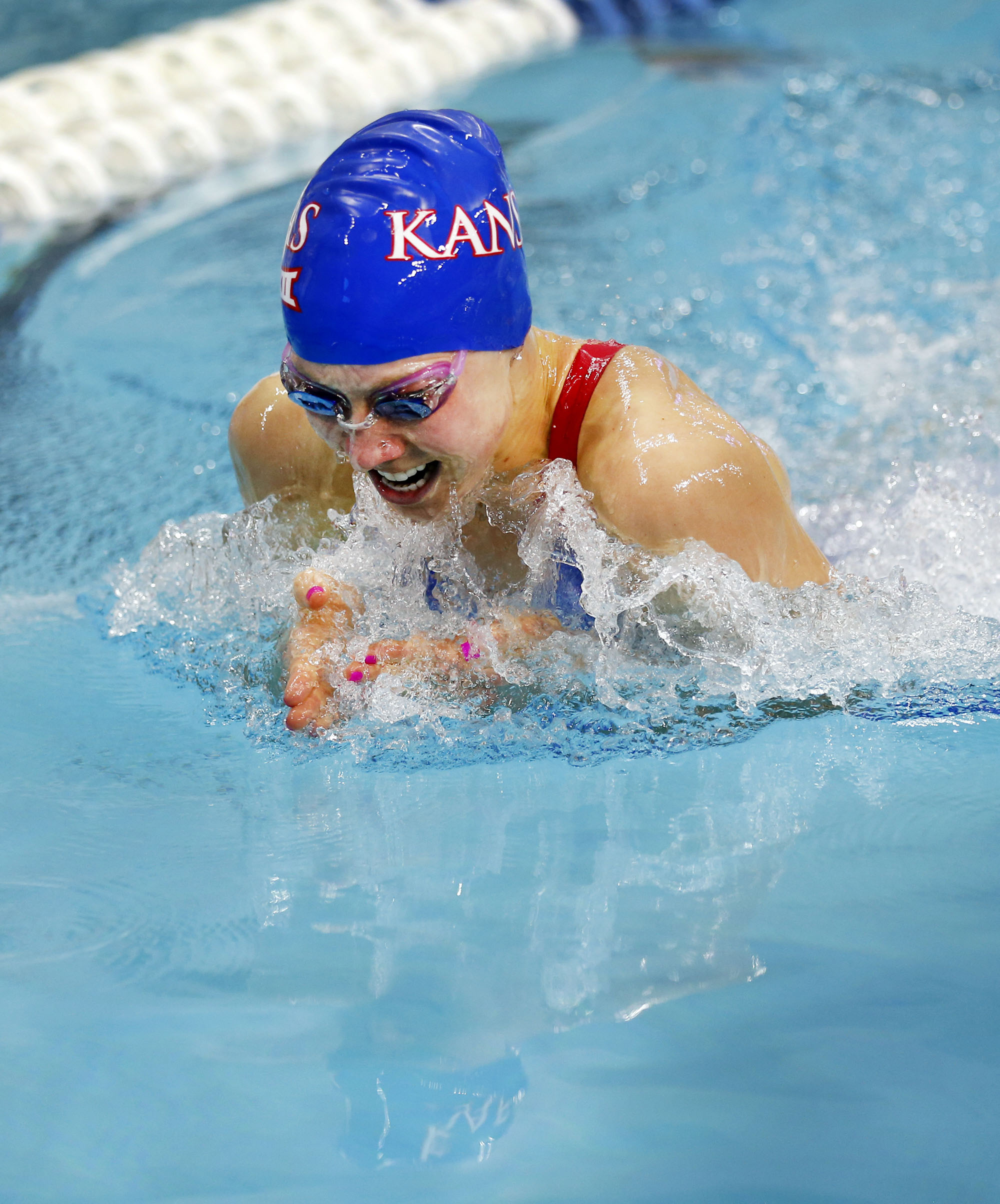 Imagine your life in the world of a college swimmer. Waking up just before the sun rises in time to make your 6 a.m., practice. You exert all of the energy you stored up from the night’s rest into every stroke and turn you thrust your body into.

Running from practice to eat your breakfast on the go as you head to start your whole other world of classes. Learning new things and strengthening your academic life while maintaining constant interactions with your peers.

Rolling around to the evening for practice number two, homework and then to bed, to get ready to do it all again the next early morning.

It is hard to imagine how someone can do all of these things and still manage to find time to give back to the community, but for someone as extraordinary as Kansas senior swimmer Hannah Driscoll, she has found that perfect balance.

Driscoll is from Boulder, Colorado, and for as long as she can remember she has loved sports. Growing up Driscoll was a two-sport athlete focusing the majority of her attention on soccer. It wasn’t until her junior year of high school that she made the transition to swimming full-time. She has always loved sports and the cohesiveness of being on a team.

“I started swimming when I was about nine years old doing summer league and made the transition to year-round swimming my junior year of high school when I had decided to stop playing soccer,” Driscoll said. “I love the team aspect of (sports) and the competition side of things, because I am a very competitive person so (swimming) was a good way to channel both.”

Being a dual-sport athlete growing up, sports have always taken up a lot of Driscoll’s free time, but even from a young age she has made a point to be involved in extracurricular activities outside of sports themselves.

Her involvement in the community and desire to help out made her decision to represent the swimming and diving team on KU’s Student Athlete Advisory Committee (SAAC) easy.

In SAAC, there are five different sub-committees, and Driscoll works closely with the education committee where they have taken steps to provide mental health awareness for fellow student-athletes. They do this through organizing different activities and providing tips to encourage healthy lifestyles and habits.

“The best part about being involved is the people you meet along the way,” Driscoll said. “It is nice to have a voice and be present when you are there and help out in any way you can. Having the chance to be invested in the community and in the school, whether it’s making decisions or planning events, was what really transitioned me from student council into becoming involved in SAAC. I have really enjoyed being involved and it is definitely one of my favorite parts of my college experience so far.”

Being the team representative in a leadership role is a big responsibility to take on. Head coach Clark Campbell has always found academics and involvement very important to him and the type of team he wants to continue to create.

“Hannah is one of our best leaders on the team,” Campbell said. “She brings a lot of energy and a lot of passion for what she does and genuinely loves her teammates. It is evident in everything that she does. She definitely is a team-first person and so her team-sport mentality has carried over to a collegiate swimming career well.”

SAAC and student council are institutional platforms that Driscoll has impacted, but her success in the community has come from taking advantage of opportunities in public health classes she has taken at KU.

Driscoll had the chance to volunteer with the graduate students on a project to help improve morale, which aligned with what they were learning in class (physiology aspects of exercise). Her natural passion for helping others kicked in when this opportunity to help with the Lawrence Community Shelter arose.

This was a way for students to correlate concepts they were learning in class into real life. In this case, the students worked on showing people the importance of physical activity to help those who suffer with mental health, physical health or other disabilities.

“It was putting together both things that I love, sports and exercise, and then getting the chance to branch out outside of the KU campus,” Driscoll said. “It was an eye-opening, but very rewarding, experience. I made a great relationship with the people I worked with at the time and they really inspired me. They were really passionate and energetic individuals, so I am really grateful for the relationships that resulted from working with those people and the members.”

From that same project, Driscoll tries to embody the same energy she saw in her graduate student partner, Briana Novak. She continued to grow her leadership in the community through her opportunities in her classes when she also volunteered with Community Village Lawrence. With this, Driscoll would receive service requests and help the local elderly with tasks that they need assistance with.

Driscoll reminisces on the special individuals she had the honor of working with and is thankful for the strong supervisors she got to know and the chance to take on different roles in the Lawrence community.

“Again, the supervisors, as well as the members of Community Village Lawrence, are just amazing people. It really made my service-learning project special,” Driscoll said. “I feel like having both of those classes was such a blessing to be able to get out into the community and experience life outside of campus. I feel like I have learned a ton and have developed a lot of really cool relationships.”

Aside from the community work, Driscoll took the initiative to start up Fellowship of Christian Athletes (FCA) at KU after having been a part of one at her high school. FCA got started as an official chapter at KU shortly after and is still going to this day.

Her ability to coordinate and plan events, guest speakers, ice breakers and organize an encouraging setting for whoever wants to tag along only adds to her aptitude to act upon something she is passionate about. So how does someone balance the load of being a student, a Division I athlete, and doing volunteer work both on the KU campus as well as in the Lawrence community. According to Driscoll, it is easier than it seems.

“Being involved in these organizations has been the reason for my success and my ability to succeed as a student-athlete because it does require chunks of time, but that time is spent loving what I am doing, meeting people and talking with great friends,” Driscoll said. “I really think that being involved and invested in all of those things that I care deeply about has been the reason that I have been able to manage school and swimming. I have always looked forward to going to whatever it is and it has always put me in a better mood after, so I think it is because if those things that I have managed my time so well.”

It is no secret that the work Driscoll does is something special. She has mastered taking things she has learned through different areas of experiences and turned them into ways to encourage and lift people up around her. As she approaches the end of her final season as a collegiate swimmer, Campbell realizes the qualities that Driscoll will leave behind.

“We talk a lot about our culture, and the people (who are) a part of our culture are positive and supportive,” Campbell said. “(Hannah) has been, out of all of the athletes that have come through the door at KU over the last decade, probably the most positive and supportive person I have ever seen. I am really hoping her legacy carries on and somebody picks up the torch behind her. It is because of that team-first attitude that she has been incredibly positive and supportive toward her teammates and I know that everyone is very grateful to have someone like that on the team. She has definitely set the bar high in that area and she does it so well.”

Although positivity comes so naturally for Driscoll, she says it is because she takes the time to do things that make her happy, and community work has been such a big part of that for her. She understands it is not for everyone and suggests people just do whatever their niche is that makes them happy.

“In a lot of ways it came to me in classes where I thought it sounded so cool and I jumped on the opportunity because that was something that I wanted,” Driscoll said. “I would not encourage people to do it unless it was something that sounds fun and sounds like they would look forward to. When you are having fun, that is when you are making an impact and can best serve other people–when you are invested and want to be there. Ask professors for opportunities because a lot of time they have a great network and especially a feel for what is going on in the community. When you find something that you like to do and you like learning about it, then putting that into practice and sharing it with people in the community is full circle and a really, really cool experience.”

Driscoll’s time management and ability to be versatile throughout her day as a college swimmer is one that is unique. The work that she has put into the community and the University of Kansas is no secret to the people around her. She has been able to inspire others and get involved in what she loves doing most in an unexpected, yet rewarding, way.