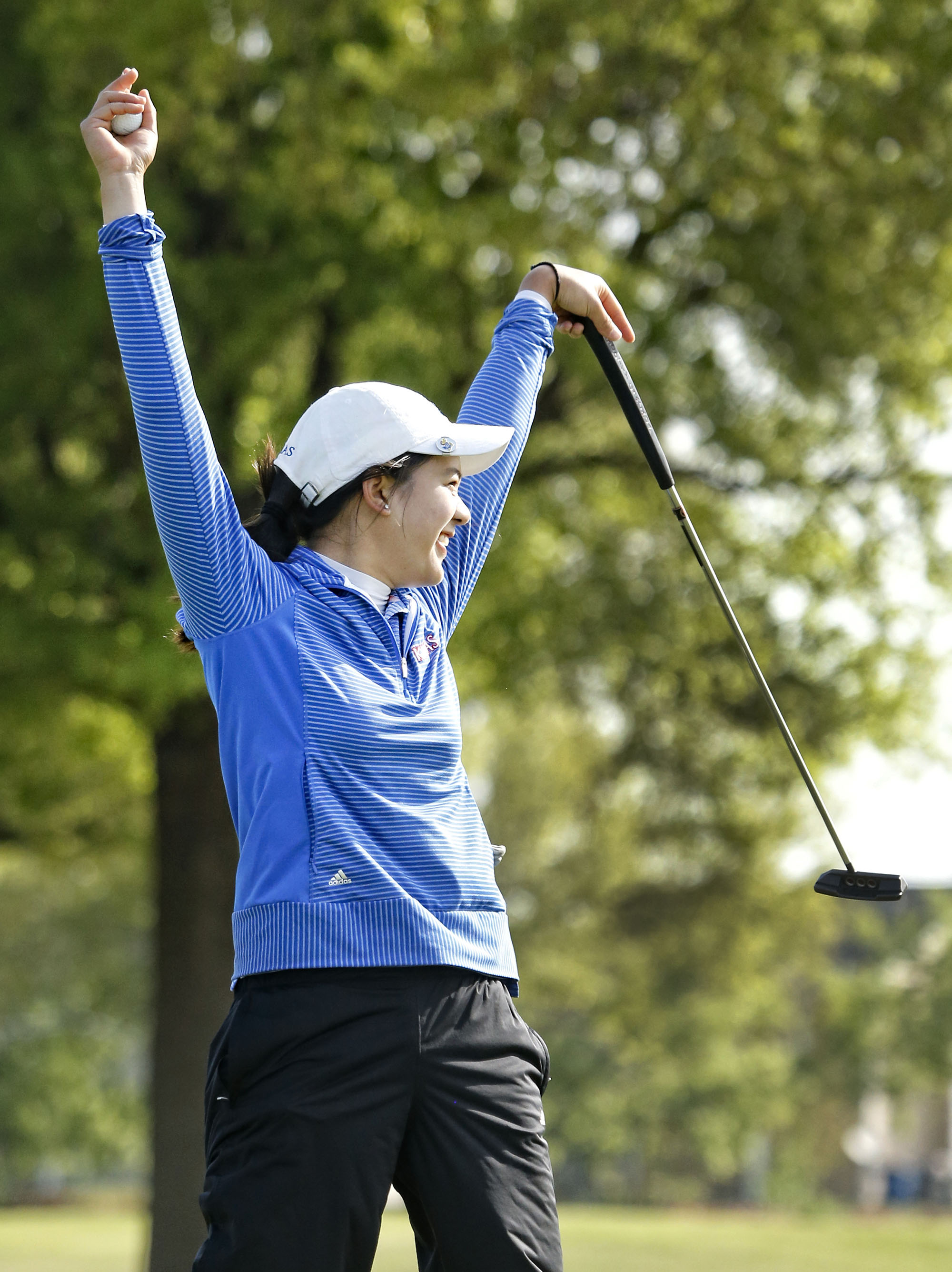 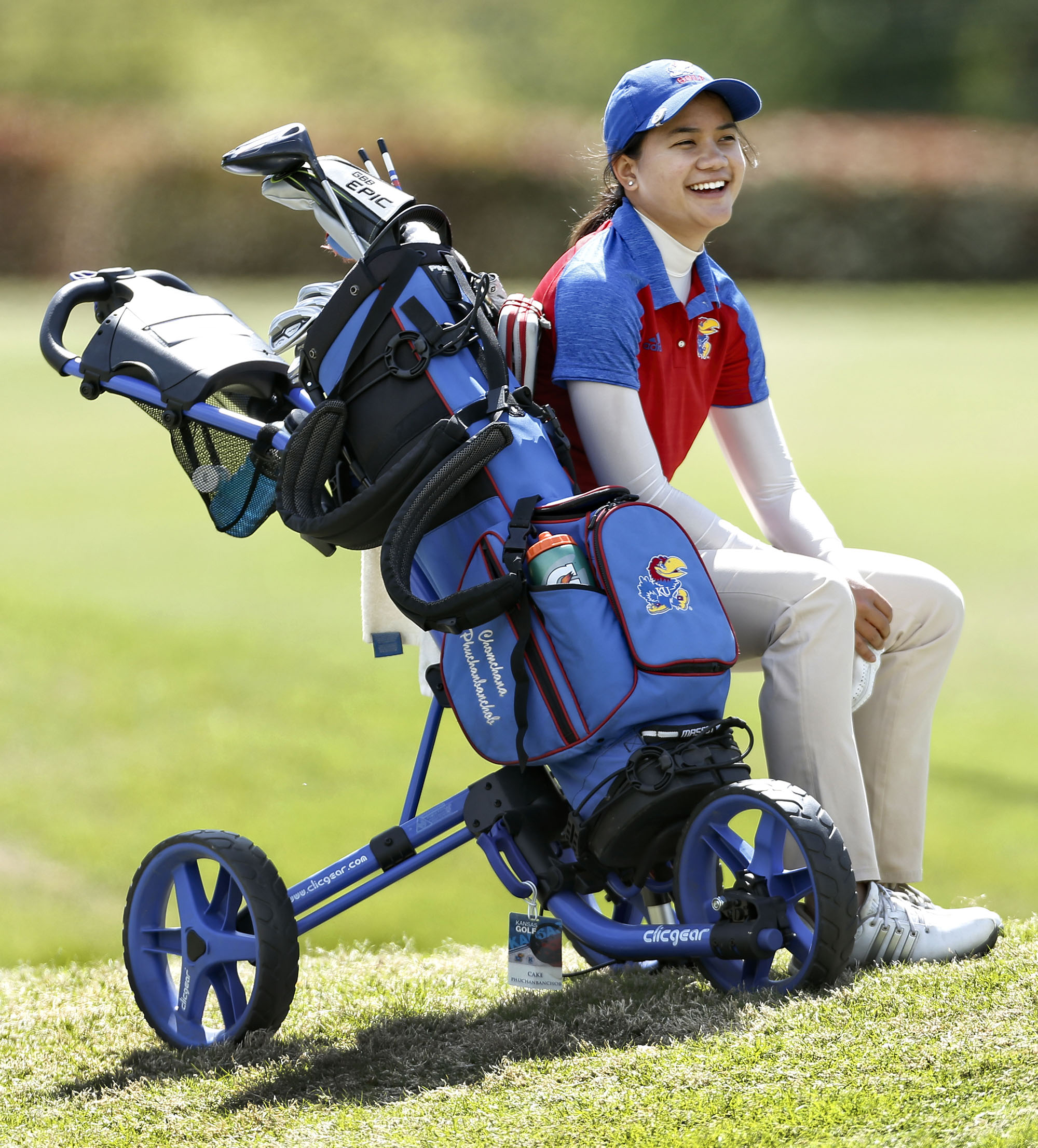 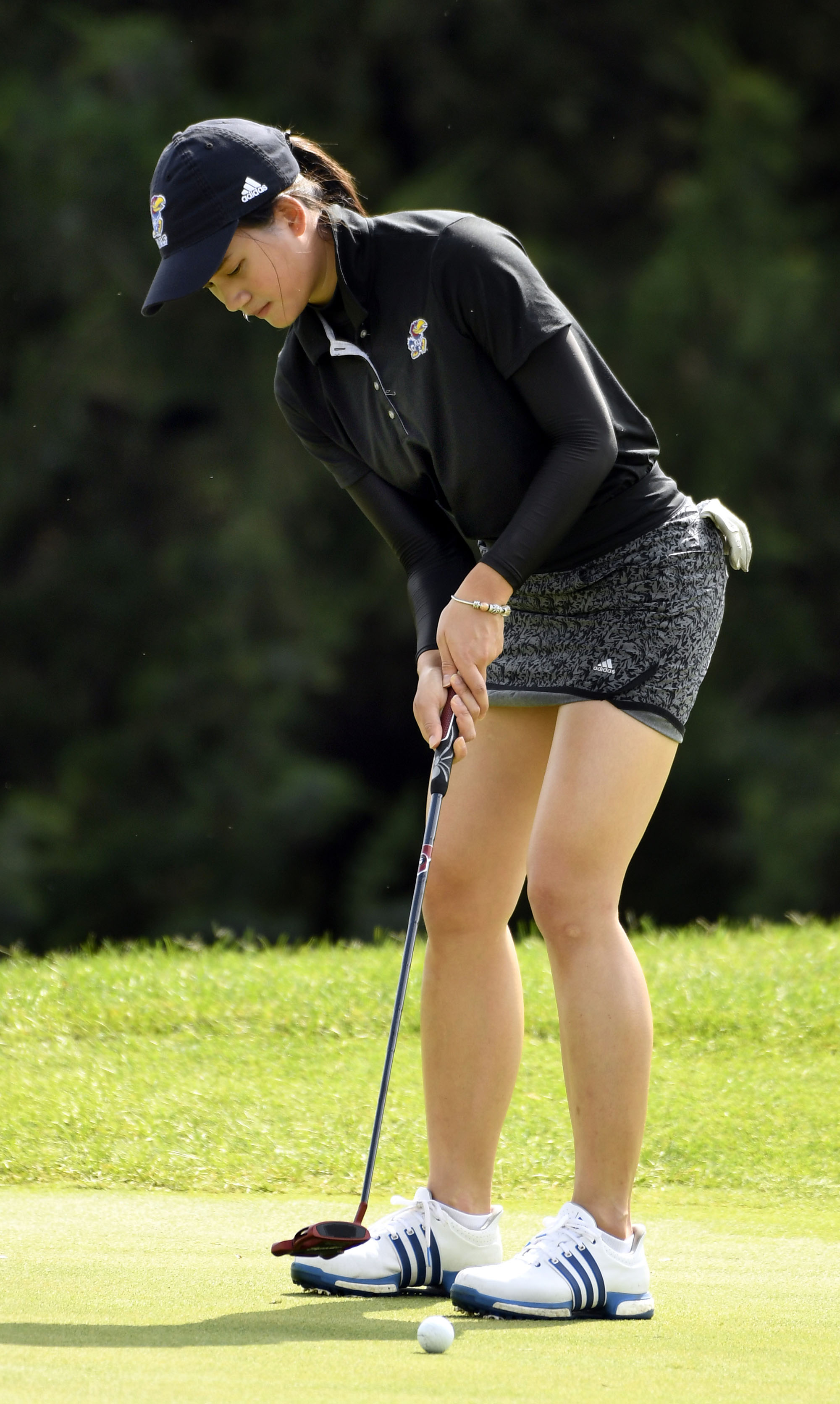 Chomchana Phuchanbanchob, better known as “Cake” by her teammates, transferred to The University of Kansas from Cal State Northridge prior to the spring season of her sophomore year in 2017. She quickly adjusted to her new role and had a strong effect on her new team with her quick swing and eagerness to excel. Transition is nothing new to Phuchanbanchob and, fortunately for her, it is something she has gotten pretty good at it too.

The transition to joining a new team and larger university can be a tricky situation for any student-athlete but Phuchanbanchob was looking forward to being at a bigger institution with the kind of historical significance at Kansas. Looking to be challenged by better competitors and stronger teammates made becoming a Jayhawk an easy decision for the Thailand native. Instead, the hardest transition Phuchanbanchob believes she made was moving to America from her hometown of Chiang Rai, Thailand, at the age of 14.

Phuchanbanchob began playing golf when she was just eight years old after her dad opened a driving range business in their hometown. She enjoyed playing golf, but it never really stuck with her until the age of 13 when she realized how much she truly enjoyed sports.

After moving to the United States when she was 14 years old, Phuchanbanchob enrolled at the International Junior Golf Academy (IJGA) in Hilton Head, South Carolina, which proved to be a decision that would alter her life path.

“The experience at IJGA was the biggest transition of my life,” said Phuchanbanchob. “My whole life changed after that and golf became such a huge part of my life.”

Phuchanbanchob was excited to play the sport she loved at the NCAA Division I level and exceled quickly at Cal State Northridge becoming its number one golfer in both her freshman and sophomore years. She knew she could be pushed further though and transferred to Kansas prior to the spring 2017 season. She meshed quickly with her Jayhawk teammates and was excited for the next phase of her life.

“One of my favorite things about being at Kansas is that I’m closer to my teammates here and we get to do a lot of stuff together,” said Phuchanbanchob. “It’s nice to have them outside of golf as well.”

Soon after Phuchanbanchob’s arrival at Kansas, women’s golf head coach Erin O’Neil saw the immense potential of the team’s transfer and decided to make an adjustment to her swing.

“Cake wasn’t initially that consistent, so her misses were a little bigger than we wanted,” said O’Neil. “We wanted to get the misses to be smaller and to be more consistent so that’s what sent us down that path. She has tremendous club head speed, she swings at like 100 miles per hour, which is like a male, and so that sometimes can be hard to control. If we can get it more efficient and have smaller misses she will have a huge advantage in distance by 20 to 30 yards on her competitors.”

For a competitive golfer, a swing change is a tough process to endure. The constant repetition is not only physically, but also mentally, tasking. It takes a lot of time to adjust and get used to the new swing, long before one can see if the hard work pay off.

“It’s exceptionally difficult,” said O’Neil. “I think a lot of times they (the golfers or the players) don’t realize it. We tell them that this is going to be hard but they don’t realize it until they get in there and start doing it. It’s hard to make a change because we are doing it while we compete. So, as soon as you get pressure on it, your natural tendency is to go back to what you were doing before so it’s definitely not a straight line of progression, there are steps backward. It’s very difficult mentally to keep your head in a good spot and trust that you are working on the right thing.”

Phuchanbanchob has been hard at work for over a year now to get comfortable with the adjustment to her golf game and feels the change will only lead her to success.

“I think the swing change made my game a lot more accurate,” said Phuchanbanchob.  “When I do miss a shot, it’s not nearly as bad and it’s easier to predict which makes me have less mistakes compared to last year. It took a long time to change it and even though it’s (been) a year now, it is still not super stable because it was such a big change for me.”

In the spring of 2017, Phuchanbanchob competed in all seven events for the Jayhawks and earned a top-10 finish in her first tournament donning the Crimson and Blue. Her first appearance was at the Westbrook Invitational, a tournament she played well in and was excited to get back to.

“When I play in a tournament, I don’t like to think about whether I really like a course or not but it was really hard to avoid Westbrook because I liked playing it so much and I played pretty well last year,” said Phuchanbanchob. “This year I didn’t have the mindset that I would perform great. I just wanted to go out there and enjoy playing and after I played it was like, ‘Oh, okay, that was really good.'”

On February 25, Phuchanbanchob returned to Peoria, Arizona, for the 2018 Westbrook Spring Invitational and shot a 69 in the first round, a first for any Jayhawk in the 2017-18 season. Phuchanbanchob also recorded a career-low 54-hole total (214).

“I struggled last year because it took so long to really change that part of my swing and I wasn’t performing well,” said Phuchanbanchob. “Coach (O’Neil) really got me through that and I took some time off from golf. Everything takes time to go through it and there is not a quick way to success.”

O’Neil believes this is only a glimpse of the impact Phuchanbanchob’s swing change will have on her future success.

“In the last six rounds we competed, she just had one round that wasn’t that great, but the rest were more like what we knew she had in her and we know there is even better in her,” said O’Neil. “She wants to be pushed. That is a great thing — to have desire — and so I believe we are hitting just the tip of the iceberg with her if she can keep trusting it and keep fighting through it.”

The mental aspect of golf can be the biggest hurdle for many young golfers but since Phuchanbanchob has been reaping the benefits of her swing change and seeing the reward, she has gained confidence in her new abilities but remains humble about her situation.

“Even though I’m playing better now and have gained confidence, there’s still a long way to go for me, but my coaches and teammates really helped me through that struggle,” Phuchanbanchob said.

With a few spring tournaments left to compete in before the Big 12 Conference Championship, which takes place April 20-22 in Dallas, Texas, and is being hosted by TCU at the Dallas Athletic Club, Phuchanbanchob does not want to put any added pressure on herself but remains hopeful of where she can take herself this season.

“My goal for the rest of the season is to just keep improving myself and my game; and enjoy every day that I’m here,” Phuchanbanchob said. “I think good things will come from that.”

Many student-athletes have to overcome hurdles in their way during their careers. Whether it be a physical change or mental barrier, the true moment of success is after he or she is able to fight through the transition and let their talents shine.

Phuchanbacnbob has dealt with the transition of moving to a new country, transferring to a new school and now also has a new swing in her golf arsenal. Transition is nothing new to the young athlete and as long as she sets her mind to it, the success for “Cake” will surely follow soon.