“It’s about time,” laughed Hilla (Rantala) Skiba. “He’s been at Kansas since 1999. It’s great and I’m happy he stayed in one place and has kept the team at a competitive level for so long. That’s not a small task.”

“It’s been a long time coming,” said Caroline Smith. “It’s a great accomplishment that he’s been able to continue to have winning and successful teams and stayed at Kansas for as long as he has.”

“Congratulations to Coach,” said Estelle Johnson. “I think it’s a huge accomplishment and he should definitely be celebrated for that. He brings a winning mentality to the game and I’m not surprised at all that he’s coached the program forward and they’ve been able to reach a huge milestone.”

“My first reaction was, ‘Man, 50 games ago was when I played?'” said Caroline Kastor. “In soccer, wins are not guaranteed. You could play the better game for 98 percent of it and still lose. It’s hard to get wins and that really is a testament to him. He deserves to be recognized.”

“It’s exciting,” said Kayla Morrison. “It’s more than just me; it seems like I’m playing for something bigger. It’s awesome to get your 200th win and it’s big for him and big for us, but now we have to get him even higher.”

These are words from just a few of the players who contributed to Mark Francis’ 200 wins as the head soccer coach at the University of Kansas, as well as his own thoughts throughout the years, from win No. 1 to win No. 200.

“We’re not by any means where we want to be. We’re slowly getting there and the last three years we’ve been able to be a little bit more consistent in terms of our results. Typically, we’re always the underdog and I’m fine with that. Our mentality, as a group, is not a lot different now than back when all those guys played. We always felt like we had a little bit of something to prove. If you work harder than the other guy and do a lot of the little things right, consistently, you’re going to win more games than you lose. That’s what we’ve tried to establish.”

In 1997, Hilla (Rantala) Skiba, a freshman from Finland, and Francis found themselves in Mobile, Alabama at the University of South Alabama. The season before the two arrived, the newly established soccer program at the University had gone just 2-17. The following year, the first coached by Francis, the team went 18-3, a turnaround that still stands as the largest in NCAA Division I women’s soccer history. After two years and a lot of attention, Francis began to receive calls and offers from multiple schools wanting him to take over their programs, ultimately choosing the University of Kansas.

“We had a solid team that he recruited and coached us above our abilities at that time,” said Skiba. “Schools started calling and when the transfer was happening I asked, ‘Would you consider taking me with you?’ He said yes and I came to Kansas with him.”

Once at Kansas, Francis earned his first win as a Jayhawk in the second game of the 1999 season against Wyoming, topping the Cowgirls, 4-1, in Lawrence. The team was far from perfect – at the bottom of the standings in a competitive Big 12 Conference and in the middle of a transition.

“We got slaughtered by a couple teams,” said Skiba. “We took a beating by Nebraska, 8-1, in Lincoln that year. When we earned our first victory against Wyoming, it wasn’t like, ‘Wow, everything is going to be different from now on.’ That wasn’t the feeling yet. Things were looking up. We were improving.”

At Kansas, Skiba earned her undergraduate degree in economics, a Master’s in economics and a Ph.D in finance. Today, you can find her standing in front of a classroom as a finance professor at Colorado State University.

“It’s something that was never in the plan when I was a 19-year-old-girl coming from a foreign country to the United States,” said Skiba. “The advising, scholarships and support that we got as student-athletes enabled me to get on a really good path professionally as well.” 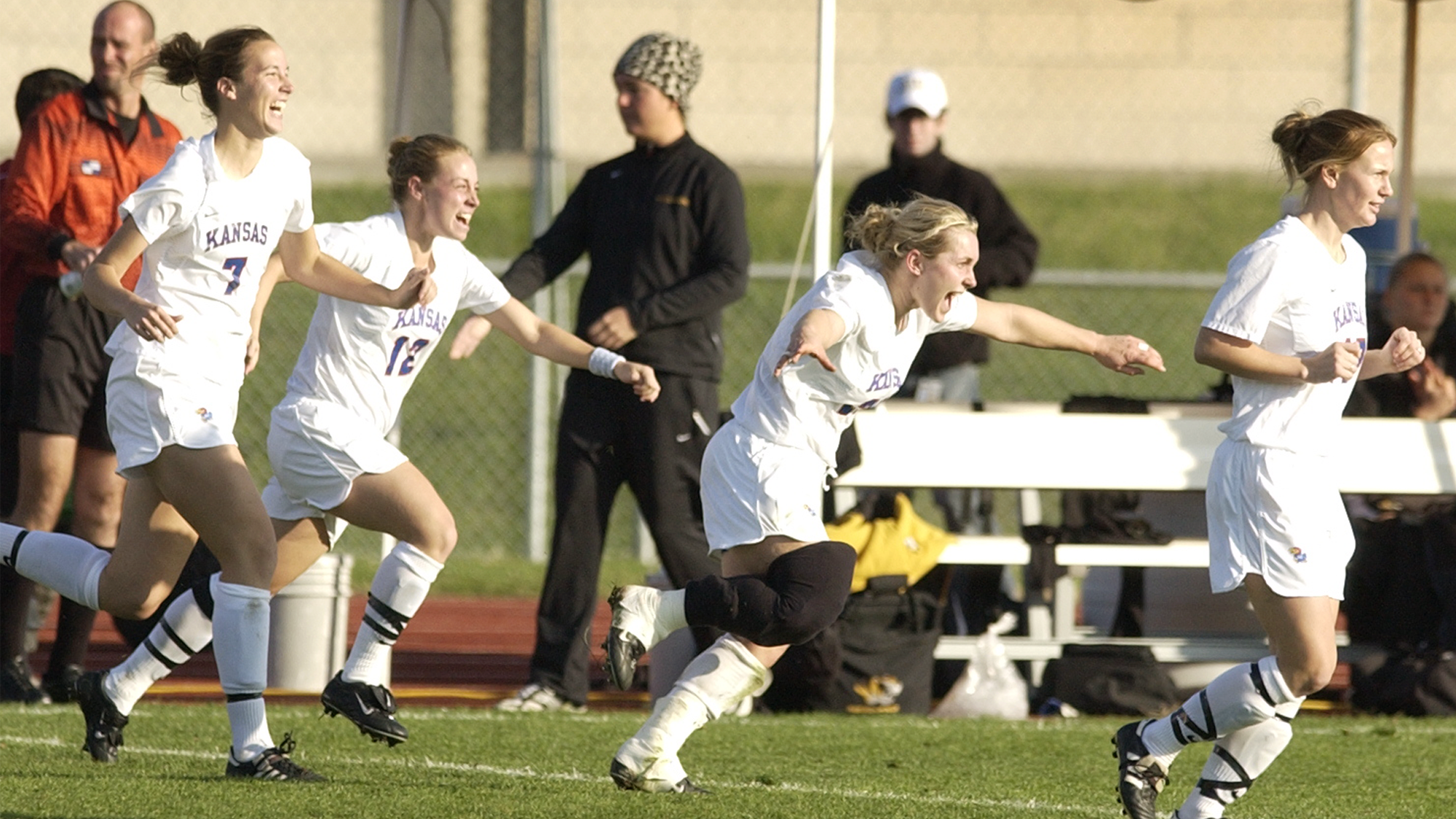 Transition complete and the team on the rise, Francis had made the Kansas soccer program his. With his third recruiting class having played together for a year, sophomore Caroline Smith and her teammates were trying to make a name for themselves in the Big 12. They did just that, going 18-6-1 in the 2003 season.

“There were teams like Texas, Texas A&M and Nebraska that seemed to have been a little bit more established,” said Smith. “The teams we always had were such hardworking teams and that set the bar high for the future, to bring in good players and for everyone to work hard and be successful.”

Coming from Minnesota to Kansas, Smith had heard of the Border War rivalry, but hadn’t lived it firsthand. The Jayhawks traveled to Columbia, Missouri to face the Tigers in what would become Francis’ 50th win as the Kansas head coach after blanking Mizzou, 2-0.

“Missouri was always a tough place to play,” said Smith. “Even being in Columbia, as a team we would go out and the way people looked at us and acted toward us, it just fed that rivalry the whole time. To go beat them on their own field was pretty awesome.”

After graduating, Smith returned home to attend medical school at the University of Minnesota. She then found herself back in Kansas City at the Truman Medical Center where she completed her residency in 2013. Smith now works as an ER physician in a hospital in Maplewood, Minnesota.

“My experiences playing soccer in college have been a really positive thing for me,” said Smith. “As an ER physician, it’s a lot of teamwork, managing and dealing with unexpected things a lot, which I think I learned to do and did a lot when I was at Kansas.” 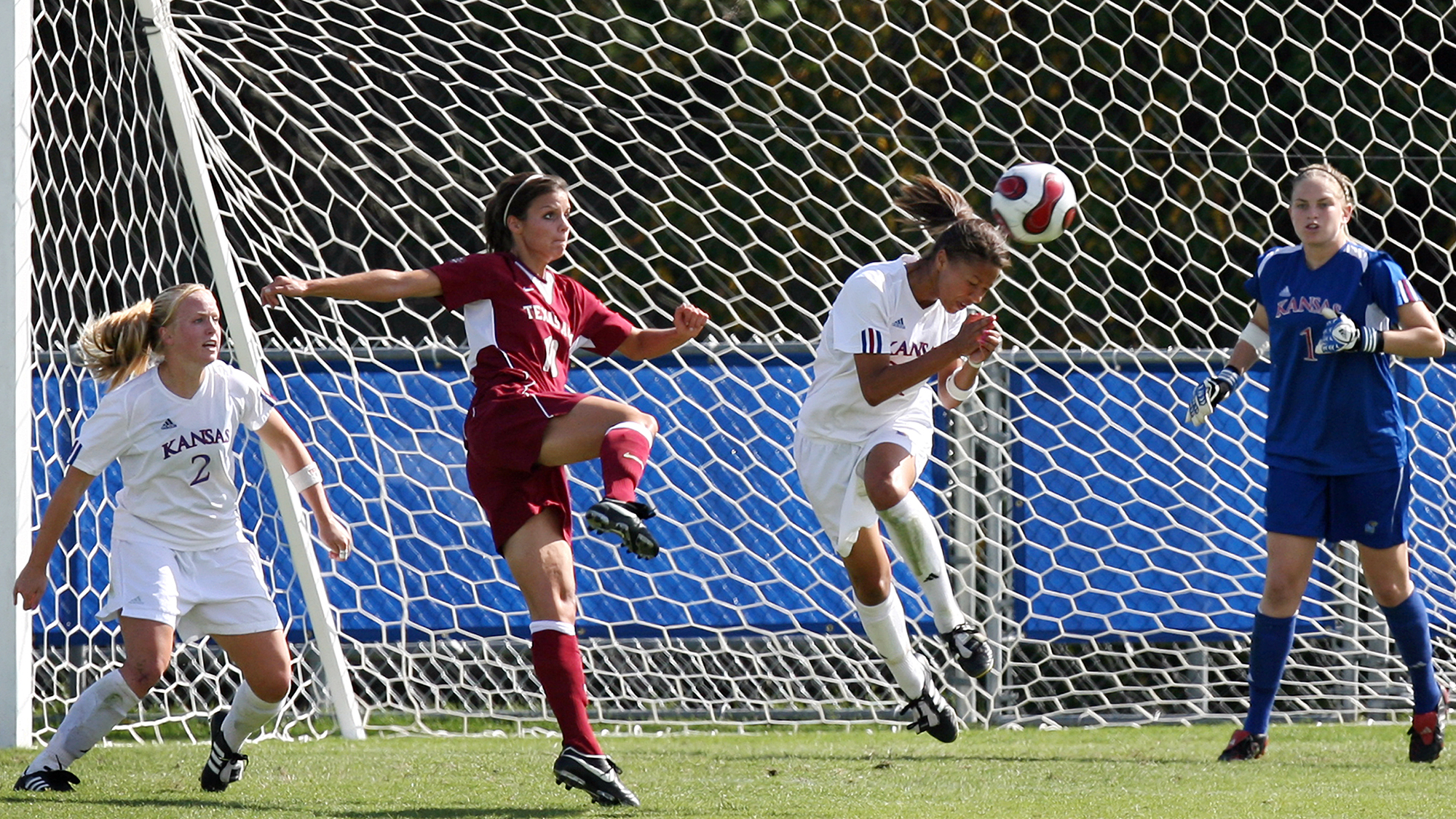 Nervous about leaving Colorado and being homesick, Estelle Johnson quickly found a new home in Lawrence and gained another family in the KU soccer team.

“In the first five minutes of meeting Coach, all of that hesitation went away from my mind,” said Johnson. “He’s such a personable guy and I knew that I was going to learn so much from him.”

Under the leadership and influence of Francis, Kansas had made a name for itself and become a presence in the competitive Big 12 Conference. When it came time to face Texas Tech in Lubbock during the 2007 season, no one had Francis’ 100th win on their minds.

“It’s not something we really think about,” said Johnson. “I don’t want to say it’s an ordinary day, but with Coach he taught us to fight and compete for everything. Whether it’s the fifth win or the 100th win, we were still going to be in it to win it.”

Directly out of college, Johnson was drafted by the Philadelphia Independence, in the Women’s Professional Soccer League, in 2010. She is currently in her third season with the Washington Spirit.

“I never thought that I was going to still be playing at the age of 29,” said Johnson. “I’m still in love with the game. At Kansas we made a good name for ourselves because we were willing scratch and claw our way into games and finish them off. That’s the exact type of player I am now.” 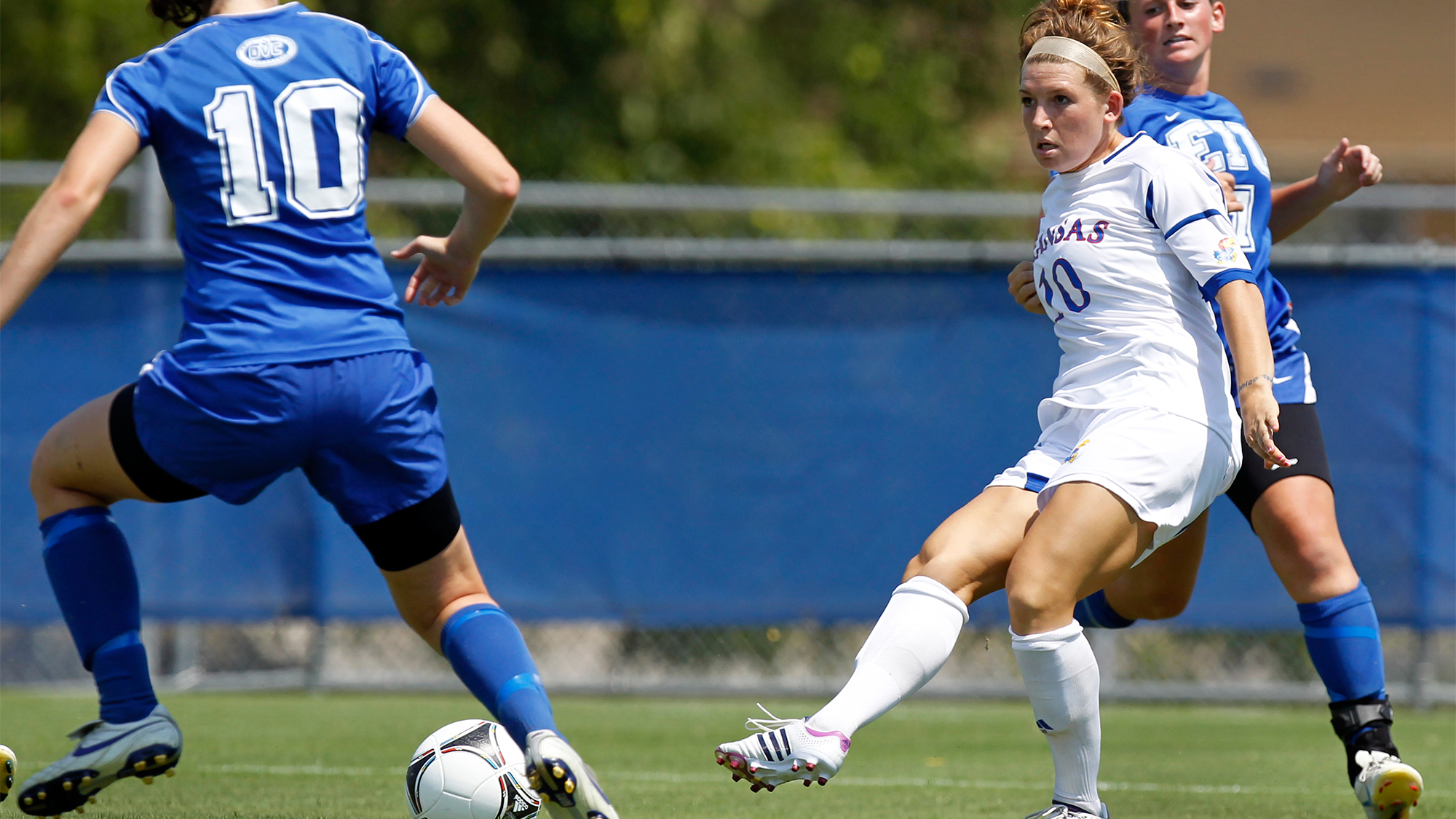 Being from Wichita, Caroline Kastor found an easy decision in coming to Kansas.

“Coach really made the soccer culture feel like home,” said Kastor. “I felt like he was good at individualizing in practice, coming up to you and talking to you specifically. He felt really invested in his players.”

Starting off the 2012 season strong, the Jayhawks were 4-1 when it came time to face Creighton in Lawrence. Knowing it could be Francis’ 150th win, the team played hard and defeated the Bluejays, 3-0.

“We might not have been as successful in the standings or what our accolades were, but we got a few wins that weren’t expected of us,” said Kastor. “Creighton is a good program so a 3-0 win against them was a fitting win to mark his 150th.”

Staying at Kansas, Kastor served as a graduate assistant for the football team as she earned her master’s degree. During that time, Kastor also played for the FC Kansas City Blues, where she went up against fellow Jayhawk Estelle Johnson on the pitch. Currently, Kastor is attending law school at Kansas and serves as an Academic Program Assistant in the Kansas Athletics Department.

“I’ve gotten a lot opportunities from being an athlete here just through networking and getting to know the academic staff and all of the staff in athletics,” said Kastor. “Coach was an extremely important person for every opportunity I’ve had off the field, but especially being able to play professionally.” 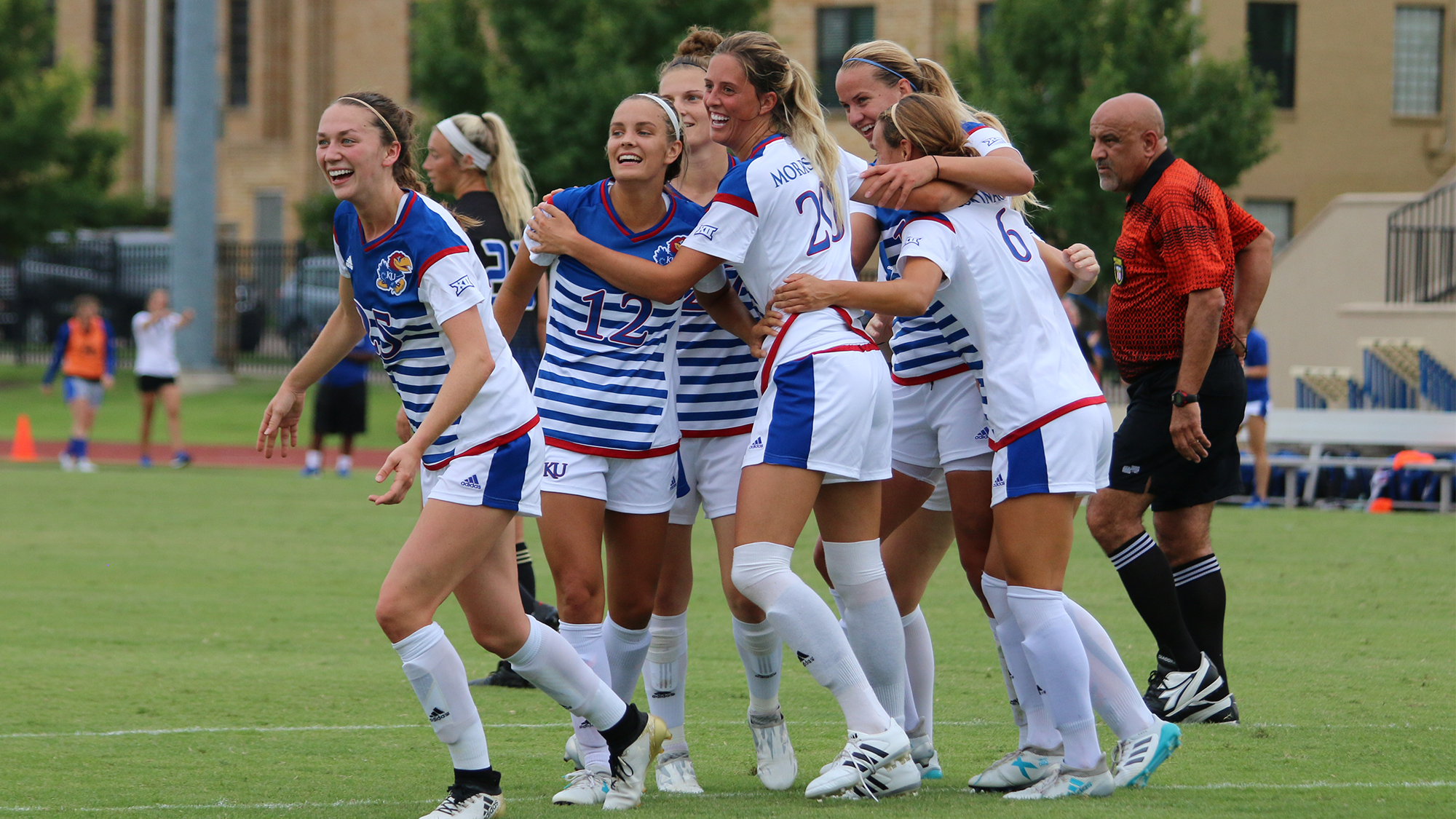 Current senior Kayla Morrison came all the way from Corona, California to be a Jayhawk and play under the leadership of Francis.

“I didn’t want a coach who was strictly going to be my friend,” said Morrison. “I wanted someone who was going to help me grow as a player. Coach definitely does that. I’ve grown while being on the team and I owe that to him and the other coaches as well. He doesn’t ever want me to be content with myself. He’s always pushing me to be better. He’s hard on me and tough on me, but I like that in a coach because it makes me know that they care.”

After finding out their game against Central Michigan could turn into Francis’ 200th win, Morrison and fellow teammate Katie McClure decided they would pour the Gatorade bucket on their coach if they got the win. After blanking the Chippewas, 3-0, Francis had no idea what was coming for him.

“We’ve made a name for ourselves and we need to push forward with that and be confident in ourselves,” said Morrison. “We’ve been doing great and need to do even better; not settle for second.”

With half of the season left, Morrison hopes to make the most of her senior year with Francis.

From day-to-day, week-to-week, during each soccer season and as the calendar continues to flip from year-to-year, the Kansas soccer team makes adjustments in its daily rituals of practice and how it competes on game day, with ever-changing personnel among the Jayhawks on the pitch. All of this is done in order to reach one common goal: winning. As head coach Mark Francis and the 2017 Jayhawks have embarked upon another season of soccer at Kansas, Francis’ 19th season, all of that hard work and dedication pays off in the head coach’s overall record while leading the program. With 200-plus victories already under his belt, Francis, his staff and his players look to continue the trend of making a name for themselves.