RCW: The Long and Winding Road 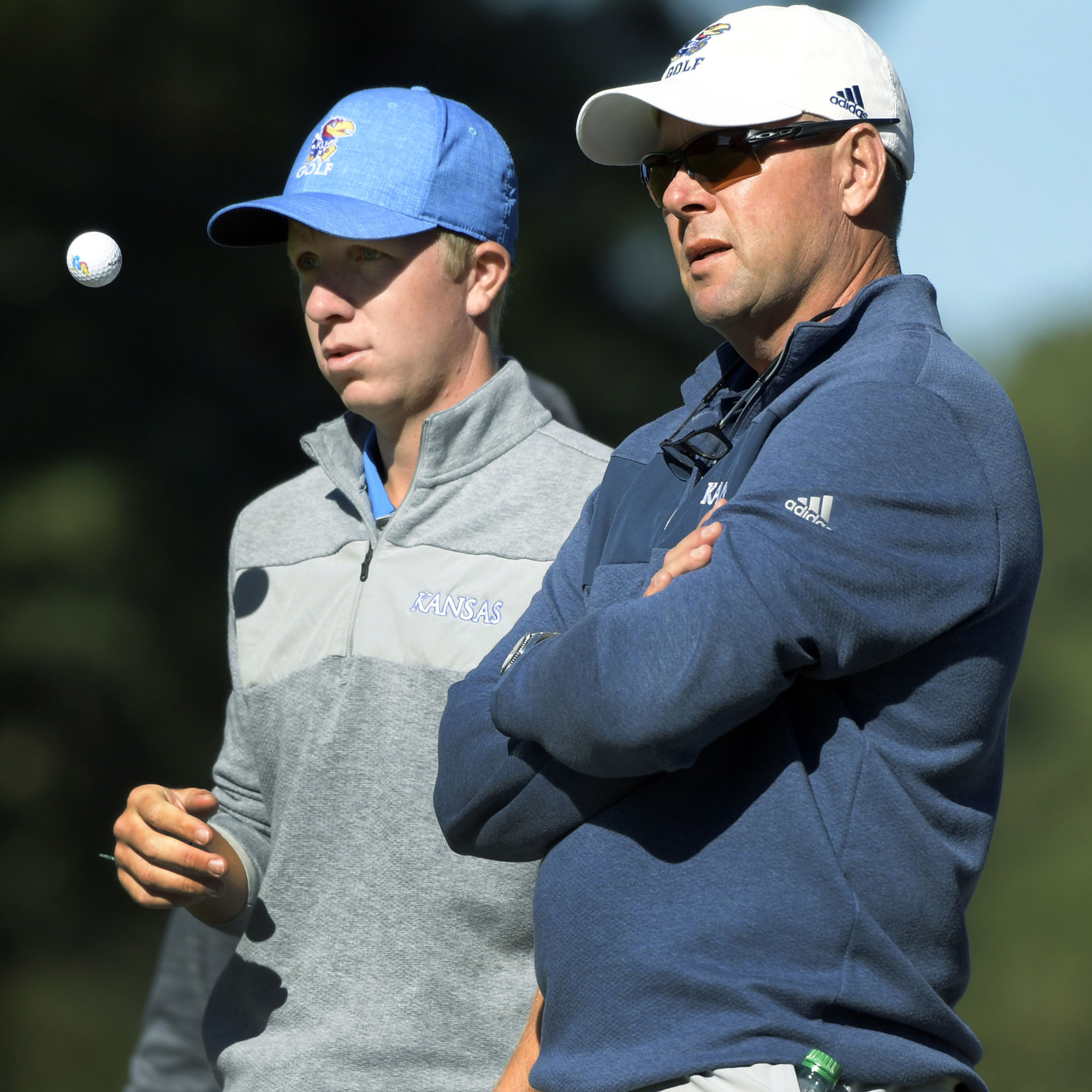 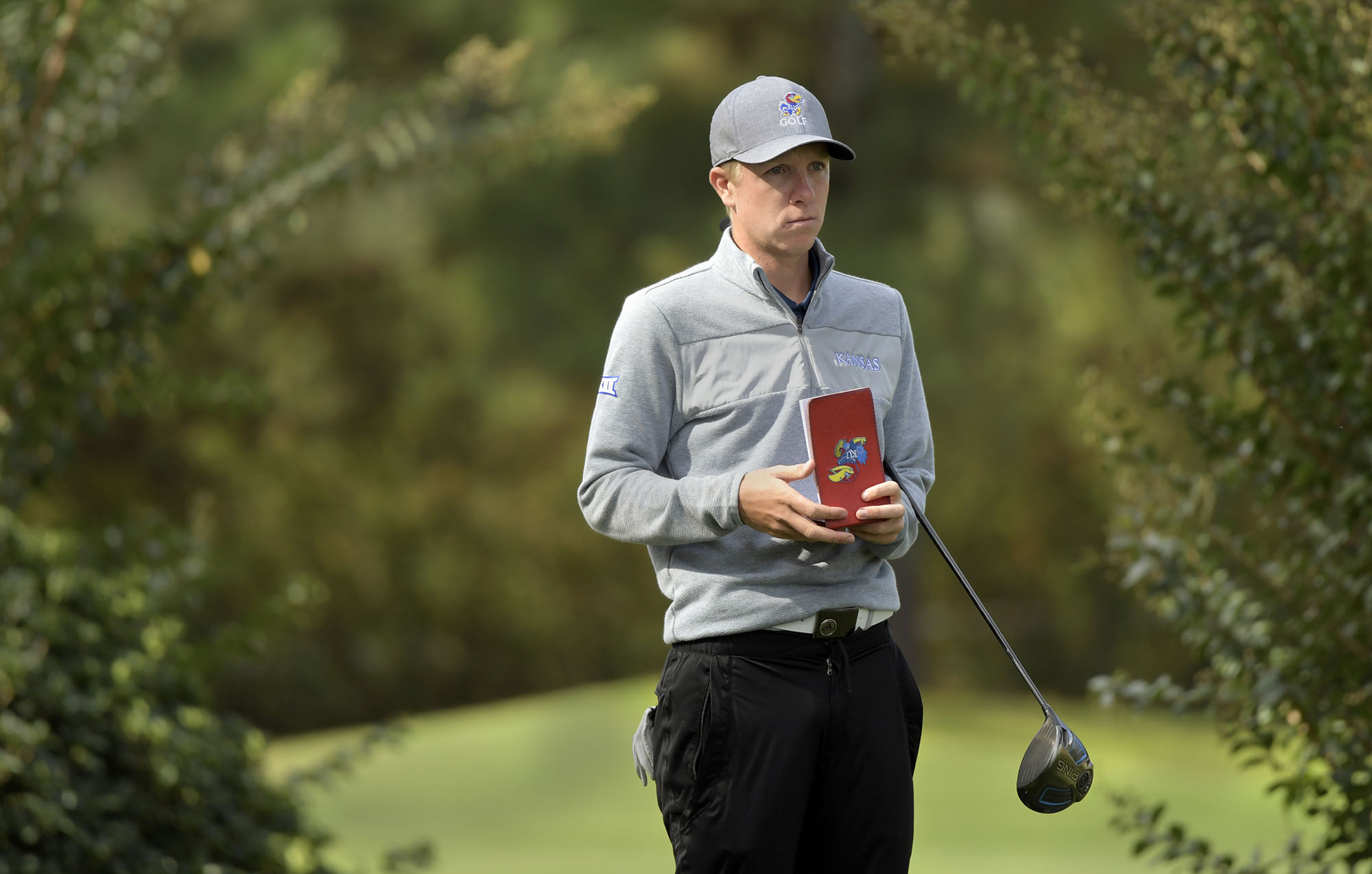 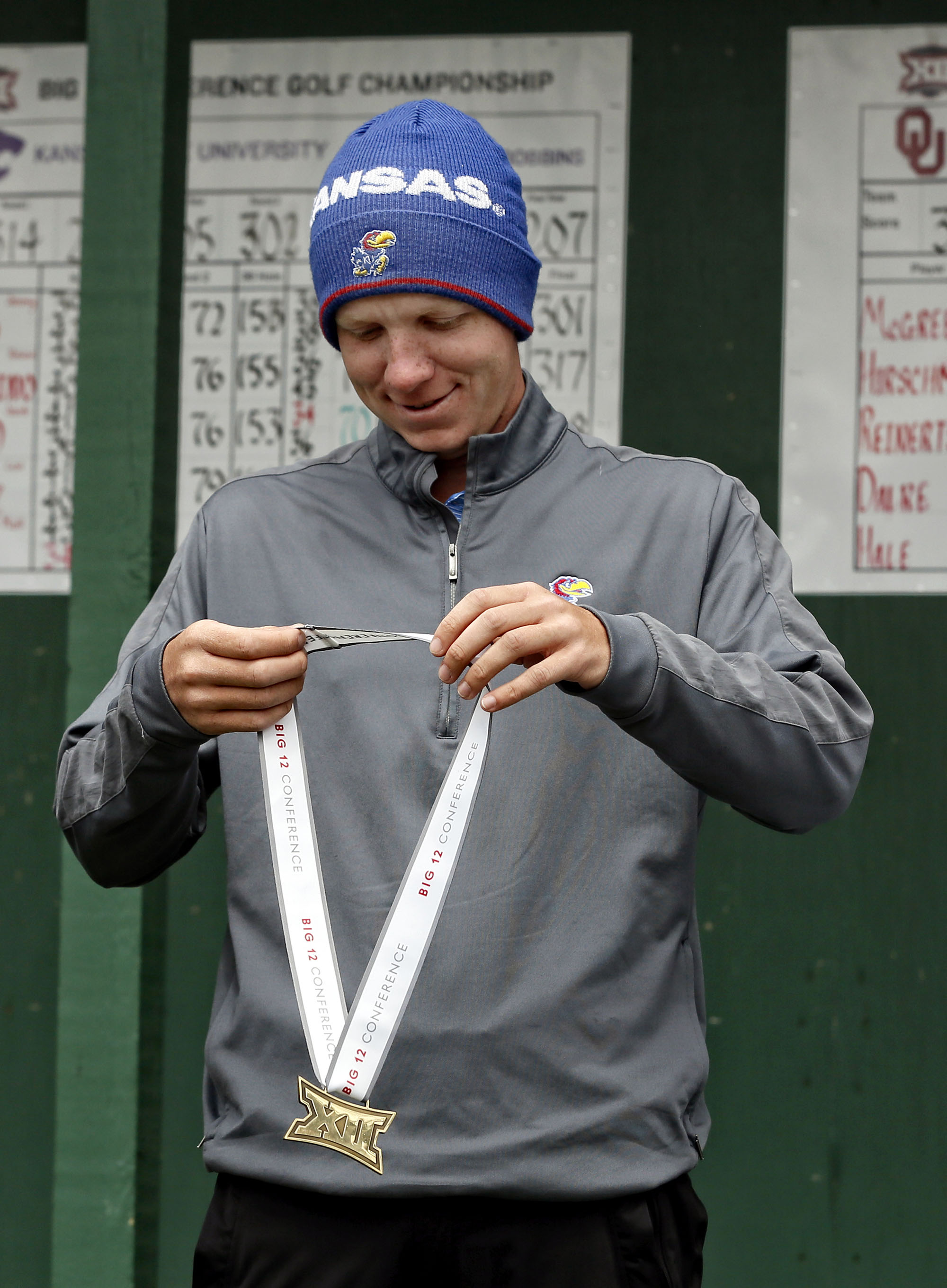 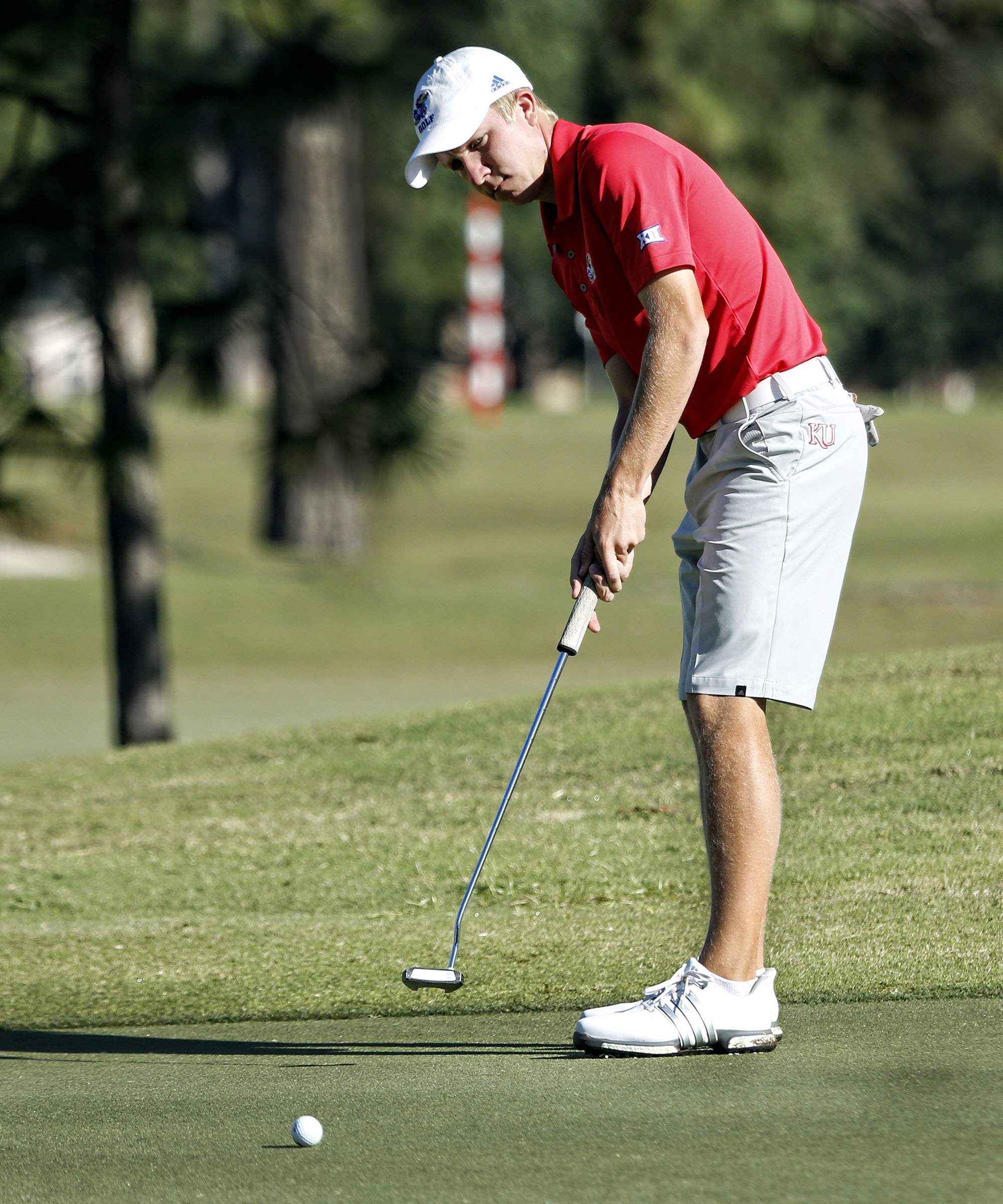 The road to Lawrence is different for every student-athlete at the University of Kansas. For some, the campus falls in their backyard, with Fraser Hall and the Campanile peering over the Kansas horizon, just a town or two away. For others, they have to embark on a prolonged road-trip, passing mountains, lakes and wheatfields to reach their new home. Daniel Sutton, a senior on the Kansas men’s golf team, has traveled just short of 6,000 miles to arrive in Lawrence, and live out his dream of playing golf at an American university.

Sutton was born in Birmingham, England, a town about an hour-and-a-half south of Manchester. He was shown the ropes of golf through his father, Adrian. As a professional cricket player for some of England’s most notorious cricket clubs, Adrian decided that once his son was born, he would retire from cricket and take up golf in order to devote more time to his family.

Sutton quickly followed in his father’s footsteps, taking up both golf and cricket at early ages. Once he started maturing, Sutton, like his father, had to make a choice.

“Cricket and golf, technique wise, kind of contradict each other,” said Sutton. “The technique in batting and golf are complete opposites of what you want to be taught, so I had to choose between the two at an early age, and so I chose golf.”

The choice proved well for Sutton, as a string of successes on the links courses of mid-England gave him glimpses of his talent that was to come.

“Probably when I was around 15 or 16 is when I started traveling around the country, playing some big tournaments,” said Sutton. “I was getting into the big (events) and making the cuts and had some decent finishes, so I knew I was somewhat good, but didn’t think I was anything special. Freshman or sophomore year I had some really good results which really gave me some momentum.”

While excelling on the golf course in his early-high-school years, Sutton witnessed three students in the grade above him who had journeyed across the pond in order to play college golf in America. To the young and optimistic high school golfer in Sutton, who had only been to America for a vacation to Orlando, Florida, this idea was enticing. His family reached out to an agency called ProDreamUSA, which helps give young, European golfers a sense of American college golf scholarship consultancy. ProDreamUSA was founded in 2004 by Scottish golfer Lorne Kelly, and has helped over 1,000 golfers live out their dream of playing college golf in the states.

Kelly and his company worked to get Sutton in contact with American schools that fit the individual golfer’s style. After being in contact with a number of coaches, Sutton found a match with a university at one of the most notorious high school golf events in England.

“The British Boys is the biggest tournament in England, and I played in that,” said Sutton. “There were about 40 (American) coaches who came over to come and watch that, and the University of Idaho coach was there. My tee time for the first round was at 7 o’clock in the morning, I was the first group off. My dad told me that I would know which coaches are actually interested in me by seeing who is there in the morning, and the Idaho coach was the only one there at 7 a.m.”

A few months later, Sutton packed his bags, and was off to Moscow, Idaho, to play on the University of Idaho men’s golf team. Upon landing in Idaho, he realized it was a little different than the sights and sounds of America that he had experienced when he was a child visiting Orlando. The language barrier and change in food took some time to get adapted to, but Sutton was focused on one thing: golf.

Coming into college golf with big expectations for himself, he unfortunately got off to a shaky start.

“At the beginning, at Idaho, I wasn’t that great,” admitted Sutton. “I got dropped for one tournament and that kind of spurred me to try harder, and from there I had gained a lot of confidence and started playing well.”

The newfound and revitalized confidence proved well for the freshman, as he went on to be named Big Sky Conference Freshman of the Year and earn first-team all-conference accolades. He carried a 72.33 stroke average on the year, and finished in the top-10 on three separate occasions.

Returning to Idaho as a sophomore, Sutton built off the successes and accomplishments he managed a year prior. He played in all 11 tournaments for the Vandals and lowered his season average to 71.88. He had five finishes inside the top-10, with his best being a share of second place at the Big Sky Tournament.

At the conclusion of Sutton’s sophomore campaign, there was a coaching change at Idaho. Sutton had seen past teammates transfer to larger programs during his two years, and decided to take after them and test the waters of the transfer market. With a coaching change at Idaho, Sutton was granted permission to contact other schools. Originally, he reached out to Kelly, his consultant from ProDreamUSA, who helped him land at Idaho.

“Over Christmas period, I had emailed (Kelly) and he said to wait and give it until the new year, and he would send a mass email out to all Division-I coaches,” recalled Sutton. “I got tired of waiting and emailed 20 coaches of teams in the top-50 myself, and I had responses and phone calls and offers from almost all 20 of them. I can’t imagine how much havoc it would have been if he had emailed all of those coaches.”

Although Sutton took it upon himself to reach out to a handful of coaches, there was one coach in particular who was familiar with Sutton’s game, and had called the sophomore himself.

“I think we were paired with them in the fall (of 2014) and I watched him a little bit, then in the spring we got paired with them again at Iowa, and he played solid,” said Kansas men’s golf coach, Jamie Bermel. “After the fall of his sophomore year, when his coach at Idaho resigned, and I think Dan wanted to play for a coach who was similar to his former coach at Idaho so he got a release to transfer. John Means, his former coach, called me and said, ‘You are really going to like Dan’s game,’ and that he could help our team. He sent us his release and I gave Dan a call and started the recruiting process. I’m thankful Coach Means called me, and I think he helped with the recruiting process. Coach Means and I have been friends for 25-plus years, so I trusted him.”

When the recruiting process was over, Sutton took his bags— and his clubs— and was en route to Lawrence, Kansas. For Bermel, he knew Sutton had talent, but was unsure of the impact he would have.

“The biggest concern about transfers is – can they help the team immediately?” explained Bermel. “I thought he could and we needed to replace some seniors from the year before.”

Despite coming in with optimistic hopes, the transfer was immediately knocked down a few notches after not qualifying for the team’s first tournament. Despite the initial setback, and brief déjà vu to when he missed an early cut at Idaho, Sutton once again used the experience as motivation.

“I played a lot better after I missed that first tournament,” Sutton admitted. “It was kind of a realization that set in.”

Just two events after missing the cut on his debut, Sutton finished in fourth place at the 2016 Golfweek Conference Challenge. During the 2016-17 season, the junior finished even or under-par in 21 rounds, which is the fourth-most even or under-par rounds in a season in Kansas program history. He also had a ninth-place finish at the Big 12 Championship, which earned him Big 12 All-Tournament honors.

This year, as one of two seniors on the 2017-18 roster, Sutton once again started the season off strong with an eighth-place finish in his first event of the year. The England native is averaging a 71.94 round-average, and is tied for second on the team in rounds under-par with seven.

“The thing about him is that he drives the ball incredibly straight and is very steady on the course,” said Bermel. “His game travels really well and he adapts well to any course, which makes his scores very consistent.”

For Sutton, he has noticed drastic jumps during his time as a Jayhawk.

“My game itself has improved a lot,” said Sutton. “There’s a lot more opportunity over here, with the nutritionist and the workouts here, I like those better. We’ve got the new practice facility now which is something we didn’t have in Idaho.”

Now, just with five regular-season events left in his collegiate career, Sutton has been able to do some reflecting on his journey to KU.

“It’s been a lot of fun,” said Sutton. “It’s been pretty good too, last year we won a couple of tournaments. This year we haven’t won one yet as a team, but hopefully we can win a couple this semester. Hopefully I can make it to nationals this year, I’ve gotten to regionals for the past three years but haven’t made it to nationals as of yet. So I’m hoping this last year I can. I want to win a tournament individually too, and team-wise I would like to get to nationals because it’s the biggest tournament of the year and I’ve never been there.”

Regardless of what he has or is going to accomplish when his college golf career is through, it is safe to say that Sutton’s journey to Kansas has been a remarkable one. Although he has been an ocean away from his family for four years, he has always felt the love and support of his of his parents, Adrian and Linda, and sister, Emily. The weekend of Feb. 17, Sutton’s parents made the 5,304-mile journey to Palm Desert, California, to watch their son play in the Wyoming Desert Intercollegiate. Following the team’s fifth-place finish at the event, the trio of Suttons returned to Lawrence to have a week with their son in his home-away-from-home, which featured being in attendance at the 104-74 Kansas men’s basketball victory over Oklahoma on Feb. 19.

Following his graduation at the end of the 2018 summer term, Sutton plans to be a part of the North Dakota Tour; a short-term tour that allows golfers to get the experience of playing professionally. Should Sutton have high finishes on the North Dakota Tour, he hopes to eventually attend Q-School in efforts to earn a spot on the Web.com Tour, which ultimately leads to the PGA.

“I know he has a bright future in whatever he wants,” said Bermel.  “I think he is a very talented golfer and if he decides to turn pro, he could turn some heads. Dan is a really laid-back kid. Nothing seems to bother him on the golf course or in life.”

Sutton has traveled a combined 5,813 miles to get where he is today in his golfing career. As he continues to pursue his passion, the number is going to continue to increase. Regardless of the uncertainties of the future, the experiences of the past have shaped him into the person and the golfer he is today. Time will tell where Sutton will go next, but it is undeniable that he will always have the impacts of England, Idaho and Kansas to stick with him.