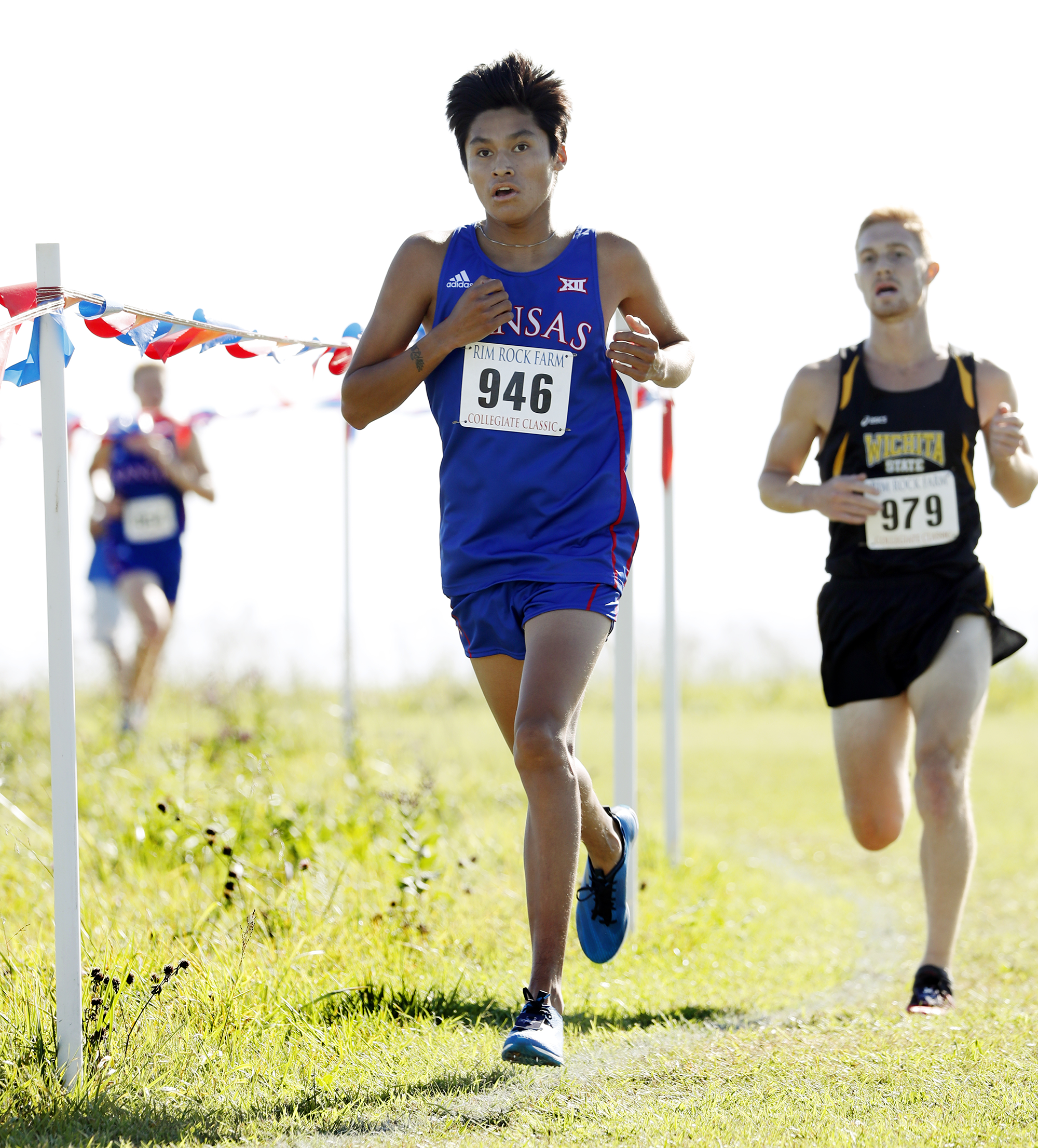 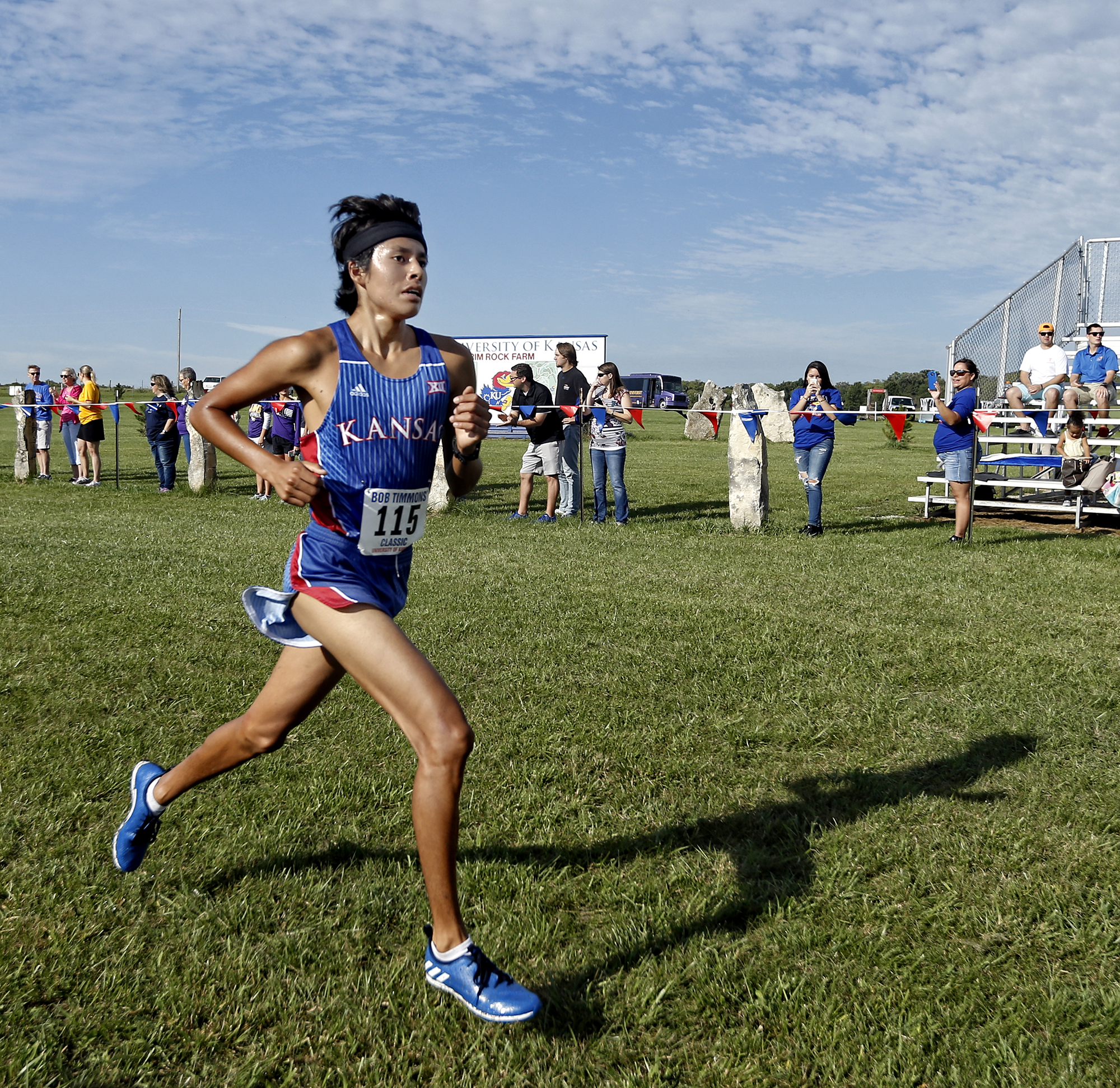 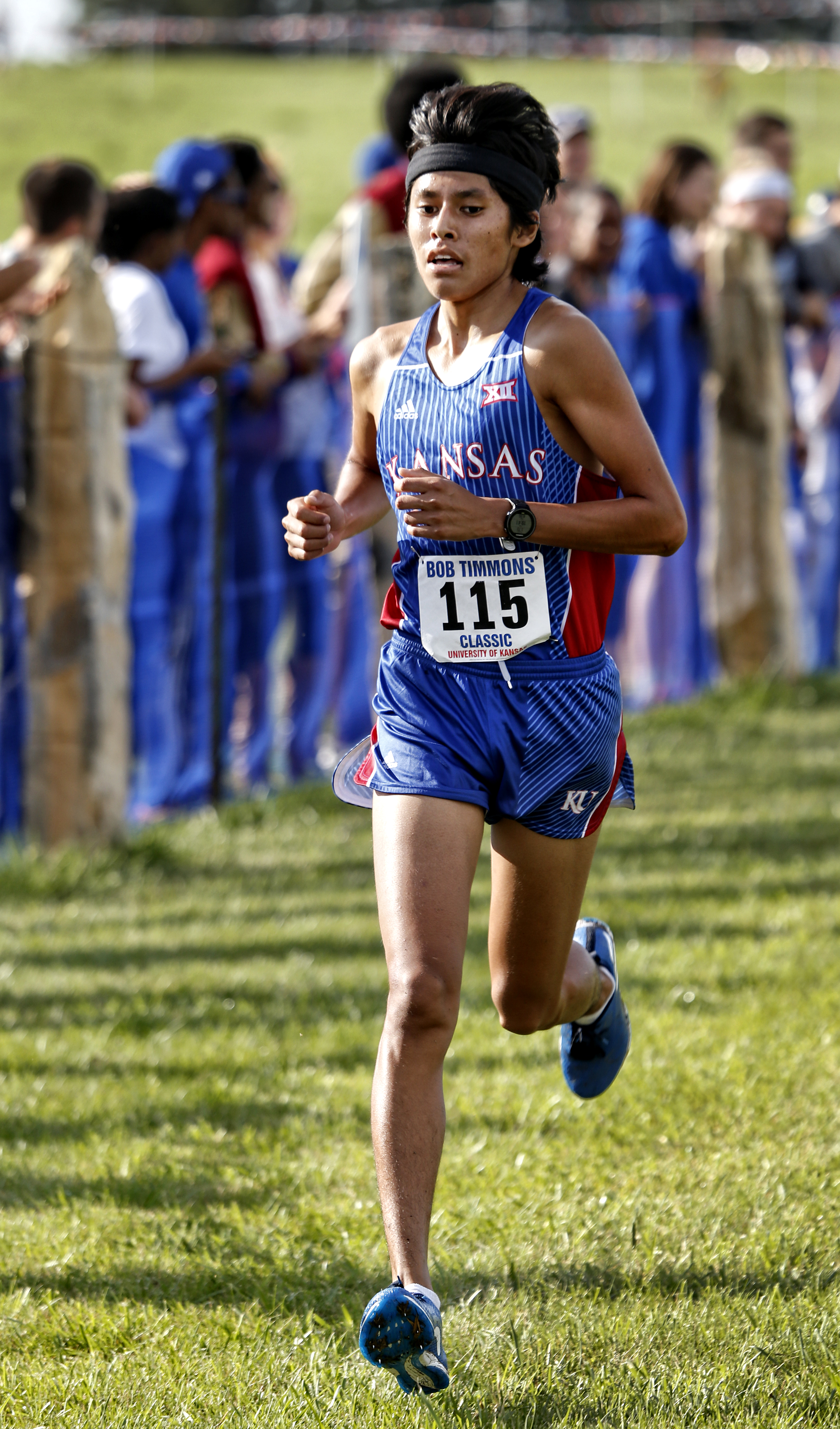 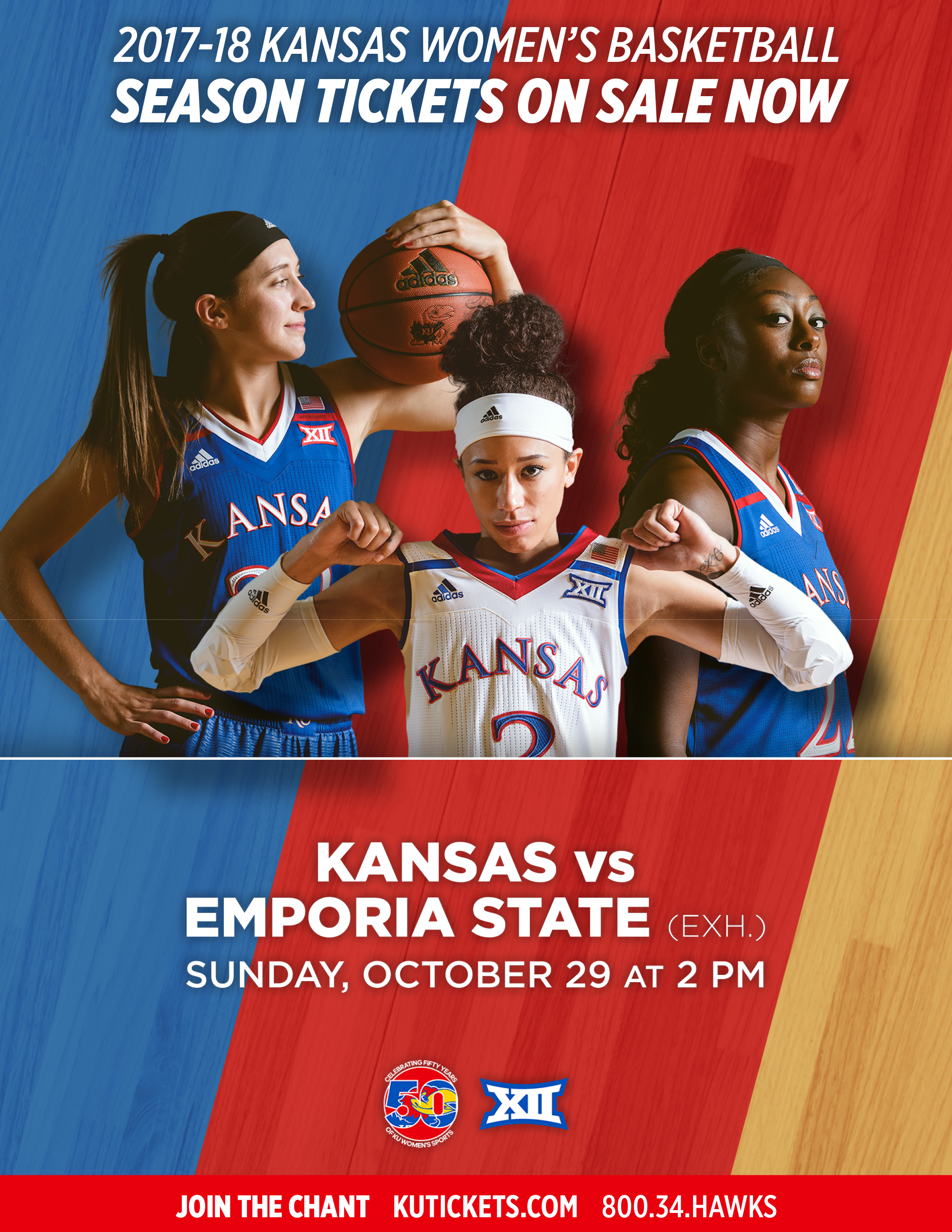 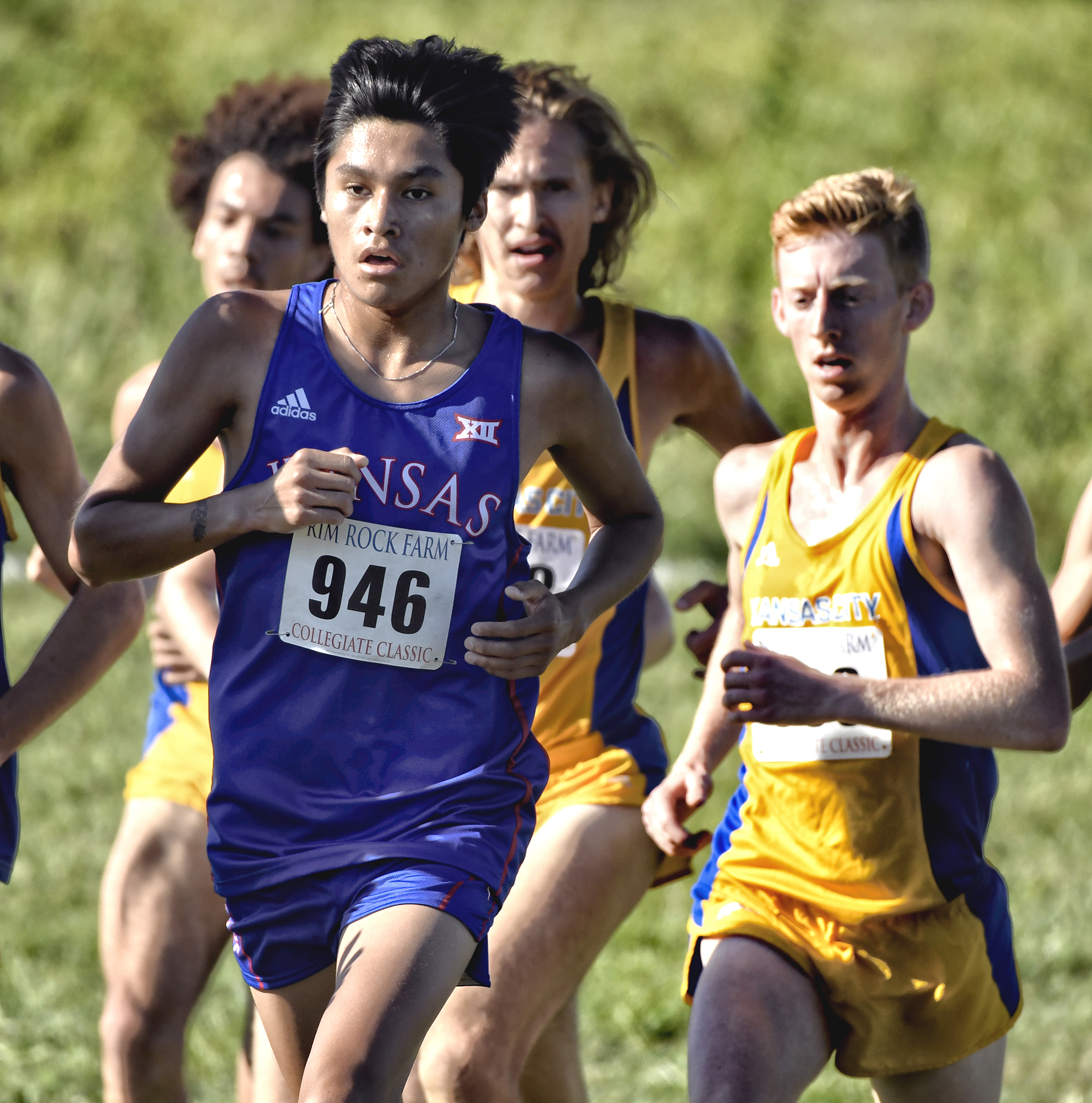 Growing up on the Fort Berthold Reservation just off the Missouri River on North Dakota Highway 23, brothers Avery and Chace Hale now both run cross country at a Power 5 school. Their transition from a small town of less than 3,000 people to running in a Kansas college town is understandably surprising – until you talk to Avery and Chace. Avery is the elder of the brothers being a sophomore while Chace is a freshman. The Hale brothers’ background is a large part of what made them the stand-up men and student-athletes they are today.

Avery and Chace attended New Town High School in New Town, North Dakota. The school, which totals around 200 students, may be small, but is known for having one of the most prolific cross country programs in the nation, having won 12 boys’ state championships and two girls’ state titles since 1982. Despite the powerful program, New Town never had a student-athlete run cross country at a college outside of North Dakota until Avery was offered a walk-on spot for Kansas.

A large part of the Hale brothers’ success can be attributed to their father, Jay Hale, who became an assistant coach for the New Town cross country team the year after Avery graduated in 2014. High school success was there for both Avery and Chace but especially in Chace’s case as he was a part of multiple state championships while at New Town. Avery and Chace credit their father for his help on and off the cross country course and track. Although Avery never had his father as an official running coach, he said his father has always been like a coach and a father at the same time.

“I would come back from practice and he would ask me what we worked on as well as making sure I ate right and got a good amount of sleep. During the offseason, he would make sure I was running,” Avery said.

Jay was Chace’s high school cross country coach for two years and was his basketball coach for four. Chace understood his father was tough on him for the team’s overall benefit.

“It was pretty hard,” Chace laughed. “My dad would always get after me. He would have to somehow be a coach and a father at the same time. My dad would be extra hard on me to show an example to the other guys about how hard they should be working.”

Growing up in New Town, Avery and Chace faced temptations all over the community, just as their peers did. Drugs – particularly meth – and alcohol played a dominant role in their community. Avery and Chace had multiple friends who were involved in drugs and alcohol. Chace had first-hand knowledge of seeing how truly devastating and life-altering these substances were for some members of the reservation, including some of his high school classmates.

“There were a lot of athletes who could have done what we got to do, which is why we give our parents so much credit in being a major factor in us staying out of that,” Chace said.

Avery and Chace’s parents, Jay and Kyonia, helped make sure their sons stayed away from the distractions by being positive influences. Avery and Chace believe their parents’ example was one of the biggest factors in them staying out of trouble.

“It is a struggle to try to make it out of the reservation,” Chace said. “It is hard for some people if they do not have the right support system.”

With his parents’ assistance, Avery fought through the distractions on a daily basis and was able to go to Kansas and try out for the cross country team. Although he did not make the cross country team his first year trying out, he reached out to the coaches for advice and leaned on his father’s encouragement.

“I continued to work hard,” Avery said of his freshman year. “I kept in touch with the coaches, asking what workouts I could do to help get ready to try and make the team. Later, a spot opened up and I was excited to take it.”

Avery and Chace grew up as Kansas fans watching basketball games, but Avery’s ultimate inspiration to come run for Kansas occurred while he was watching a movie in the second grade.

“I watched a movie called Running Brave and that inspired me to come run here.”

While watching the movie Avery thought to himself, “if he can go out and do, this so can I.”

Chace was motivated to go to Kansas due to his brother’s success.

“The reason I came here is because of Scotty (a nickname of Avery’s), watching him succeed his first year with the team,” Chace said.

Avery does not give himself any credit for helping pave the way for his younger brother to make the cross country team at Kansas.

“Chace’s dream was to always come to KU,” said Avery. “Our mom actually went to Haskell and she used to explain how Lawrence was such a cool town, which I think made both Chace and myself want to come here even more.”

As far as Chace’s recruitment, Avery gives all the credit to his brother.

“Me being on the team, I think, opened up the eyes of my coach, and he started looking into Chace and his accomplishments from high school,” Avery said.

Chace gives his older brother a great deal of credit for what he has done for other Native American athletes.

“Avery opened up a ton of eyes for all of these coaches to look at all of these Native American runners where we come from. Demonstrating how we are just as fast as these guys up here,” Chace said.

Avery and Chace are two of five children in their household. Family is extremely important to both Avery and Chace. It is easy to see how the two brothers’ relationship has grown since Chace arrived here at Kansas. The two try and spend as much time as they can with one another. They love running and studying together at Kansas as well as being extremely competitive with each other, never wanting to lose to the other in any competition.

“It is awesome to have my brother on the team with me,” Avery said. “He pushes me to work harder during workouts. If I see him in front of me, I am going to try and pass him because I am competitive like that. I do not want him beating me. It is awesome being able to get to hang out and spend time with my brother whenever we can.”

Chace agreed with Avery, adding, “It is pretty cool having Avery’s help with academics and practice. It is a good feeling to have your brother with you when you are so far away from home.”

Avery wants other athletes to know they can achieve their goals in athletics, just as he did. Despite being cut his first year, Avery made sure he did everything possible in order to achieve his goal of joining the team.

“I just want to show even though there may be barriers and limitations, you can achieve your goals,” Avery explained. “You just have to stay tough and never give up on your goals.”

Chace has similar aspirations as Avery, stating, “I just want them to know any kid from a small town that does not get looked at very often can make it out of there and go big.”

Avery and Chace have come a long way in their journey from New Town High School in North Dakota to run at Kansas. Success has been part of the story this year as Avery has a set of top three and top four results from meets so far this year. Chace had a stellar result of finishing fourteenth at the Rim Rock Collegiate Classic. Their success shows others from the area that they can make it out too – something that they both (especially Avery) are proud of. Both brothers credit their mom and dad for helping them become the men and athletes they are today. Avery and Chace will continue working hard throughout their careers to keep proving Native American athletes can make Power 5 teams all over the country.