RCW: The Path to the PGA 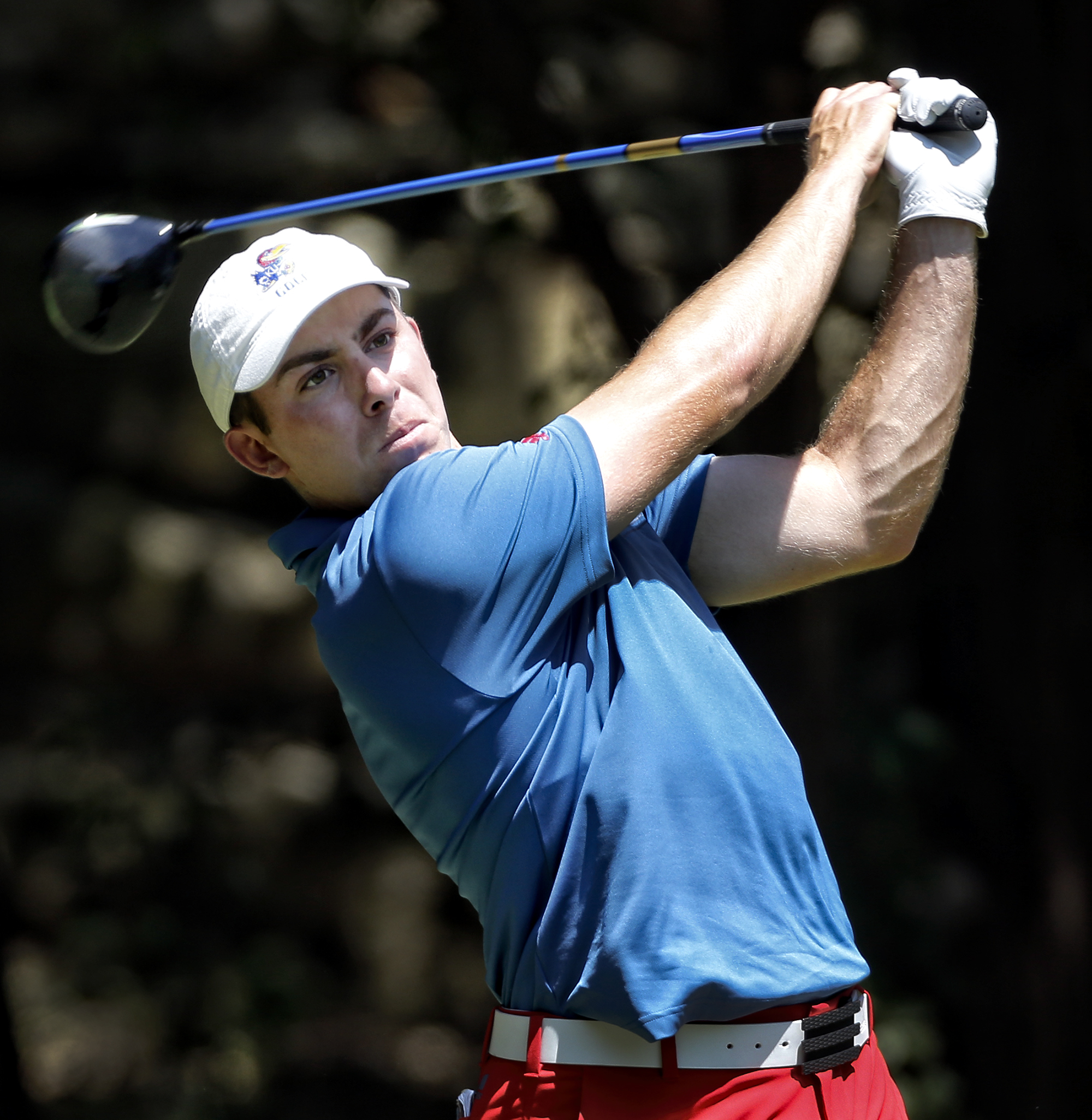 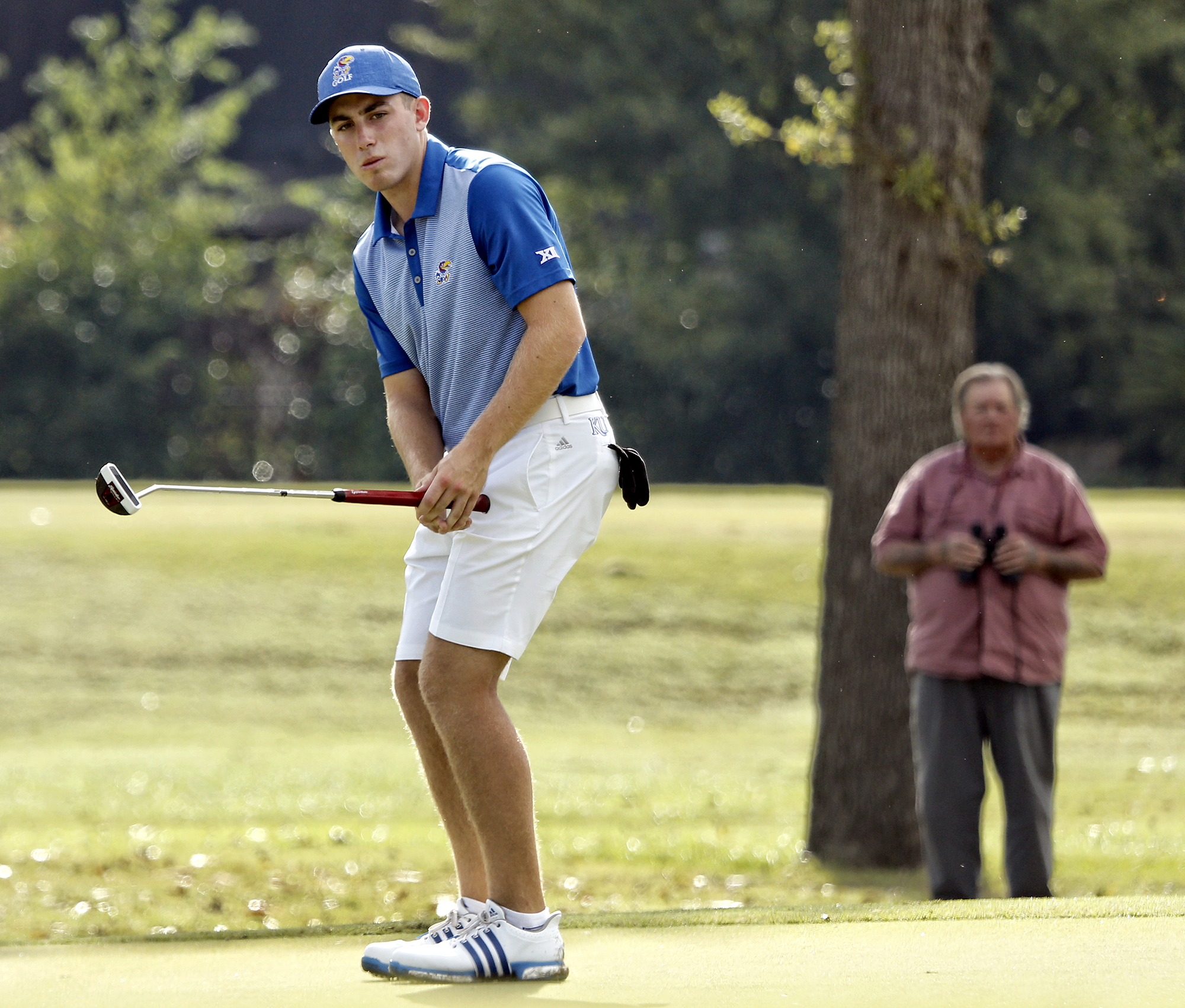 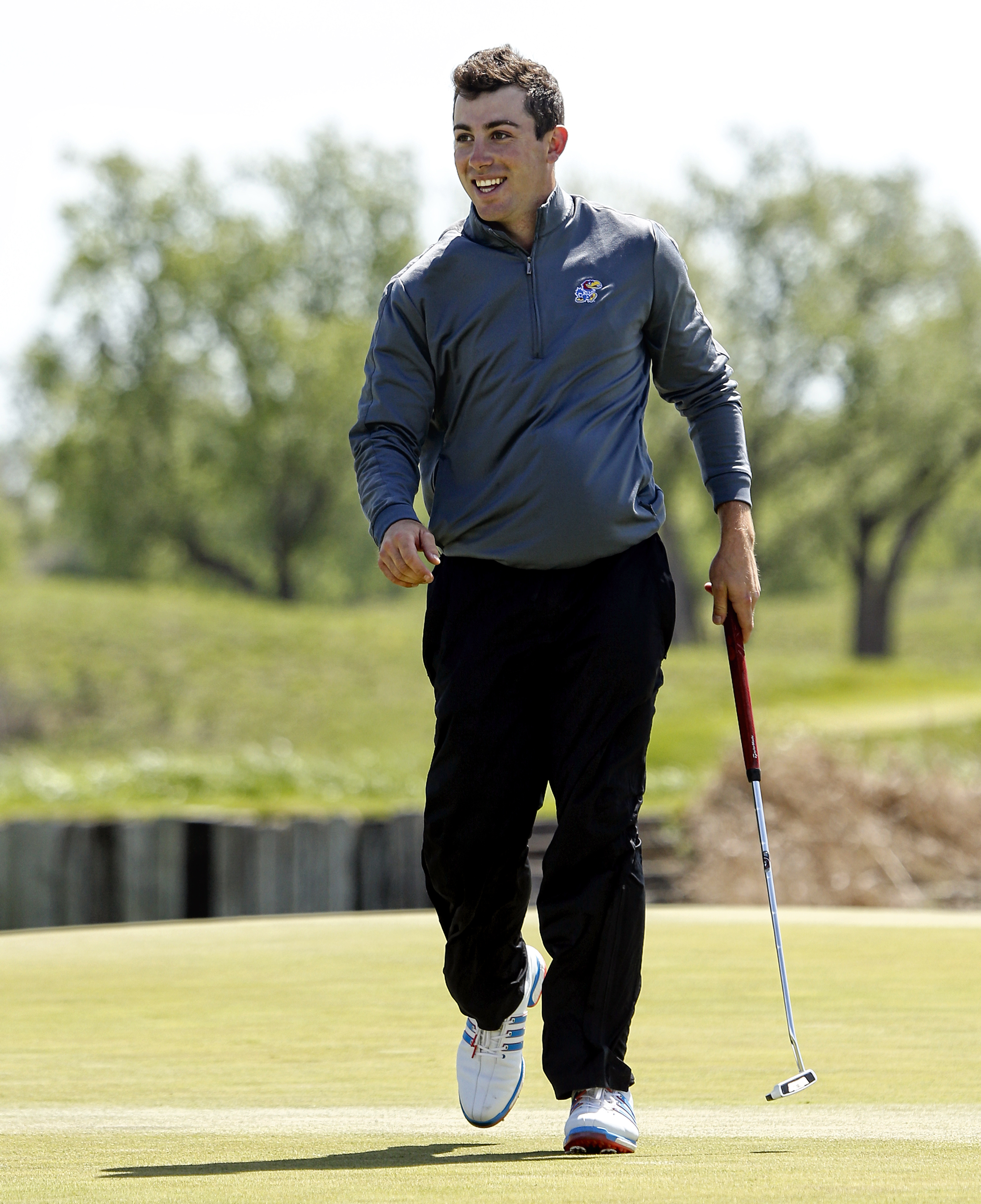 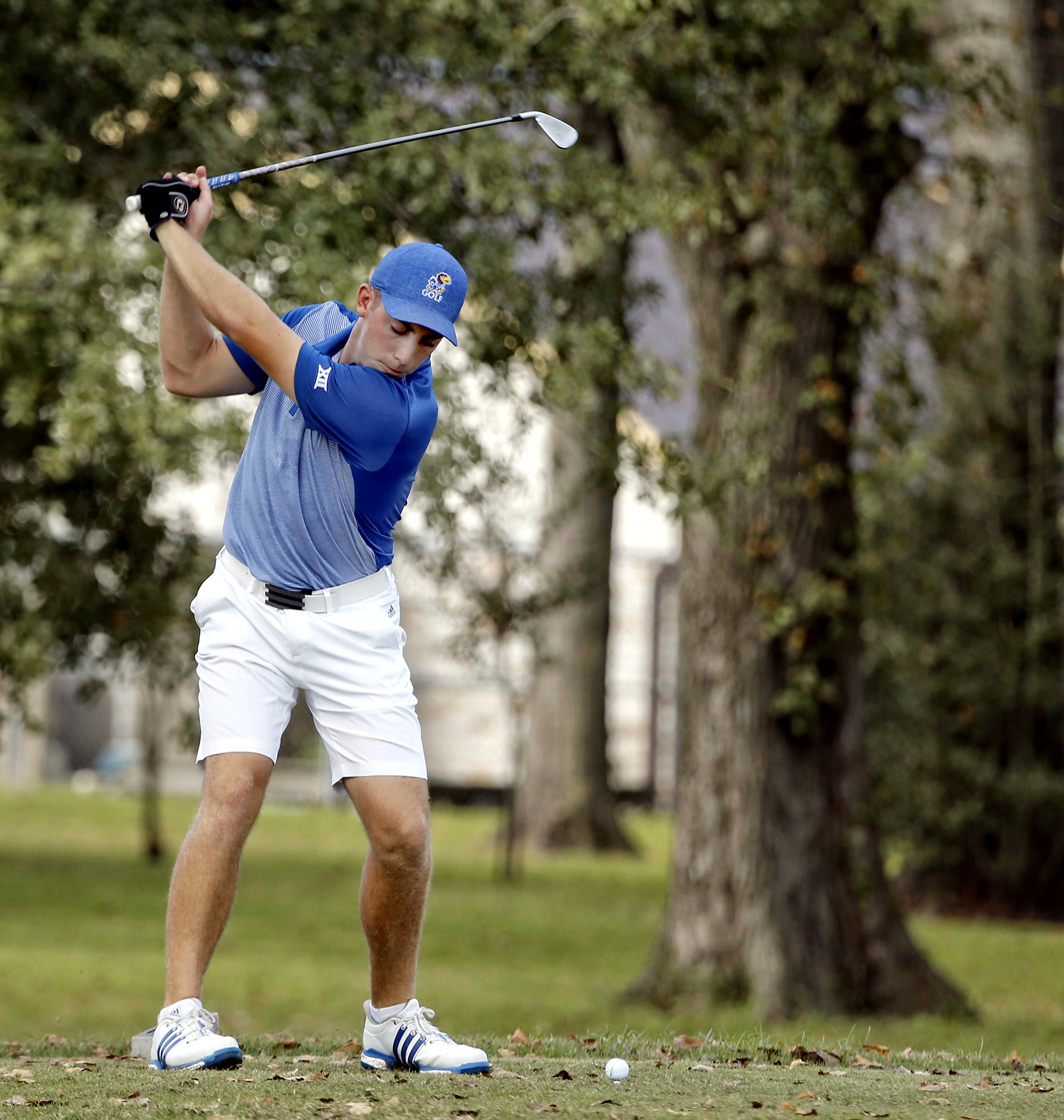 At some point, every college student will be asked the daunting six-word question that not every student knows the answer to: “What are your plans after graduation?” For Daniel Hudson, a senior on the Kansas men’s golf team, the weight of this question has been getting heavier and heavier.

“It’s weird being a senior,” said Hudson. “The previous 12 years of school, you always know that next year you are going to have summer and then go to school again. It’s weird to think that I’ll be done with school after this spring and that I’ll have to figure out something to do.”

Hudson consulted his father, Scott, at the beginning of the fall semester to discuss whether or not he wanted to continue golf after his walk down the Hill in May. The two tussled with the idea before coming to the conclusion that Hudson would embark on a road to the Professional Golfers Association (PGA).

“If I’m going to give this a shot and go for it, I really have to put everything I have behind it,” said Hudson of the decision.

The game of golf has been a part of Hudson’s life for as long as he can remember. His father, a former college golfer at Arizona State, introduced the game to Hudson and his two brothers at a young age by cutting down his old clubs for the three Hudson boys.

Despite learning at an early age, Hudson chose to focus his energy on other sports and activities growing up. It was not until the seventh grade when he decided to pick up the game that his father had taught him long ago.

“I didn’t really know what it was about (golf) that I liked so much,” said Hudson. “I loved playing for massive crowds but golf is the exact opposite.”

After middle school, Hudson attended Lyons Township High School in La Grange, Illinois. Going into his freshman year, he envisioned himself as a dual-sport athlete in golf and basketball for all four years, but shifted his focus to just golf after his sophomore year. With his eyes set on walking the course instead of running on the hardwood, Hudson excelled in golf, gaining national recognition and impressive resume-building accolades to his name.

The three-time all-conference selection ended his career ranked as No. 115 in the class of 2014. He had an eighth-place finish at state in 2013, and competed in the 2013 U.S. Junior Amateur competition. Even with these eye-catching feats, Hudson was never recognized in the eyes of college recruiters until later in his high school golfing career.

Hudson became a blip on Kansas’ recruiting radar in a rather unconventional fashion. A mutual friend of the Hudson family and Kansas men’s golf coach Jamie Bermel had put the two in connection in an attempt to get Hudson into the world of college golf. Bermel looked into the Chicagoland native and later invited Hudson and one of his brothers, Jon, to visit Lawrence, where Hudson immediately fell in love.

Ultimately, the decision came down to Kansas, Iowa and Northwestern. On a mid-July day before his senior season started, Hudson gave all three coaches a specific time when he would make his final decision, only to decide on Kansas just a mere hour before he notified the coaches.

The new Jayhawk arrived in Lawrence with a head of steam, coming off of a strong summer showing at the U.S. Amateur at Hidden Glen Golf Club at Bentdale Farms in Cedarburg, Wisconsin. Unfortunately, the momentum quickly went south.

“The fall semester was miserable,” Hudson admitted. “I considered leaving, I wasn’t happy. And looking back now, I think the biggest thing for me was that you can’t try and make college golf like you had it back home; because it’s not like back home.”

Hudson played in just two events for the Jayhawks in the fall semester of his freshman year; one of which he tied for 43rd place and the other he was disqualified from for an incorrect drop.

“There is always an adjustment between high school and college,” Bermel explained. “Kids think they’re ready but they’re not. School is harder, golf is harder, life is harder. So he struggled, like most freshmen do.”

The freshman used the winter break time to do some minor tweaks in his game and some major tweaks in his mentality. The changes paid off significantly, as he bounced back with top-20 finishes in three of his first four events of the spring semester.

“He practiced a lot over winter break and kind of got his feet back under him,” said Bermel. “I think he kind of got exposed on some of his weaknesses in his game and came back and was a completely different person in the way he was on the course. He was a much more confident person, he believed in himself and really played well in the spring.”

Ever since, Hudson has been a constant force in the Jayhawk lineup. His 113 rounds are the 13th-most in program history, while his 46 rounds of even or under-par golf rank eighth on the Kansas all-time list. His senior campaign has gotten off to a strong start through four events, as his 54-hole total of 205 (-11) at The Jackrabbit is tied for the 10th-best 54-hole total in program history.

With his ongoing progress from year-to-year, the next chapter in Hudson’s career will likely be Qualifying School, or Q-school as it is more commonly referred to, in an attempt to get onto the Web.com Tour and eventually the PGA Tour. Q-school consists of a string of four tournaments (pre-qualifying, first stage, second stage and final stage) where the top golfers in the field will advance to the next, while those who miss the cutoff will have to find other means of getting on tour. If a golfer finishes in the top-45 in the final stage, he is guaranteed a spot in the first four events of the Web.com Tour.

One Jayhawk who is well experienced with the ins and outs of Q-school is Chase Hanna, a rock in the Jayhawk golf lineup from 2014-17. Hanna has already passed the pre-qualifying and first stages of Q-school, and will compete in the second-stage at the Bear Creek Golf Club in Murrieta, California, in early November.

In Hanna’s eyes, he can transparently see Hudson in the same position a year from now.

“He’s certainly got the desire and the skill to play pro golf and if that’s what he wants to do then I think he can,” said Hanna. “If he believes he can do it then that’s all that matters. It’s all about self-belief and I think he has that.”

“There is no question that he wants to play on Sundays for a lot of money,” added Bermel. “He’s got a solid golf swing and he’s got the right mindset that it’s a process and that he has to keep grinding.”

The Q-school events for 2018 have yet to be released, but the pre-qualifying stages typically occur late-August or early-September at various locations around the country.

Only time will tell what Hudson will make of the Q-school process, but it is certain that he has made the most of his time as a Jayhawk. To Bermel, Hudson has been an incredible representative for the Kansas men’s golf program.

“He’s one of our lead recruiters because he’s so easy to talk to,” said Bermel. “He’s very worldly. He knows a lot about a lot of things and is a great ambassador for the golf team and for the University. He’s a good leader, he cares about people and about the young kids, but most importantly, he cares about the program.”

The game of golf has certainly changed Hudson’s life, but the lessons that he has learned off the course during his time at Kansas are one of the main things he will carry with him. Through all of the ups and downs and adjustments that Hudson has had to make, there is nothing more that he would like to be doing than playing the game he loves.

“More than anything, it is a sport that humbles you when you fail,” said Hudson. “I don’t think there is any other sport that does that more than golf. It’s amazing to think that the rounds where you have an awful hole can make you so much more mature.”

That maturity is the same maturity that he showed when he relearned golf in middle school, was overlooked in the recruiting process or was a struggling freshman. That maturity is what Hudson will carry with him as we walks the trail that hopefully leads to the PGA.