RCW: The power of Late Night

“You just have to be there to experience what the atmosphere is like, you really can’t explain it,” sophomore forward Carlton Bragg Jr., said.

Words are inadequate to describe the spectacle of Allen Fieldhouse in October. Many a seasoned journalist or basketball analyst have offered descriptive words that do a halfway decent job of portraying Late Night in the Phog, but the only way to truly understand the experience that comes with that evening is by being there.

Late Night is an unmatched experience, plain and simple. Sensory experience is crucial to understand the “Phog” when it heats up in late October. In the past, over 25,000 people have waited in line with hopes of being one of the 16,300 people lucky enough to be able to attend Late Night in the Phog.

“You feel the energy the minute you step foot out there,” women’s basketball head coach Brandon Schneider said. “I really think our fans, the student body, the energy and the anticipation of the whole day make Late Night unique. The fact that there are people camping out to get in the doors to watch a few skits and an intrasquad scrimmage is pretty special.”

After 32 years, Late Night has become an integral part of the Jayhawk experience. Everyone here wants to be a part of something greater than themselves. They want to be a part of the tradition. It doesn’t matter if you are a student, recruit, coach or fan, being a part of Kansas basketball means being part of history. 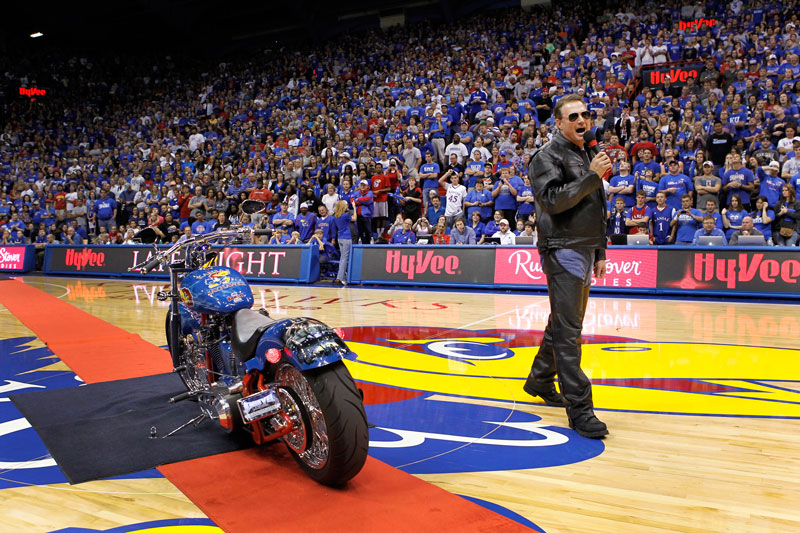 “The experience was everything you could imagine as a basketball player wanting to go to a basketball school. The fans make you feel like this is the best place to play,” former guard Travis Releford (2008-13) said. “You just know that you have a chance to be a part of the KU tradition. Wanting to play there was an easy decision for me after seeing Late Night.”

Late Night in the Phog has created a celebration for all types of people to come together. It truly is a remarkable sight to see such a diverse, tight-knit community come out to support Kansas basketball year after year. Kansas is known for having some of the most-dedicated fans in the country.

“You get to see just how diverse our fan base is and how passionate both young and old people are about Kansas basketball. Any age will go to a game and have a good time. You definitely get a chance to see that at Late Night,” senior forward Landen Lucas said.

While Late Night in the Phog is a fun event for the entire Lawrence community, it also plays an instrumental role in recruiting some of the top athletes in the nation to play for KU. Both the men’s and women’s basketball teams rely on this event to showcase their one-of-a-kind programs to potential recruits.

“The entire weekend is really big for us in terms of recruiting,” Schneider said. “This is the one opportunity where basketball really takes center stage in the fall prior to us playing games. It definitely helps to create that environment physically that you’ve been talking to recruits about for a long, long time.”

Men’s basketball coach, Bill Self, agreed that the atmosphere is one of the best parts of Late Night and that it definitely helps with recruiting. 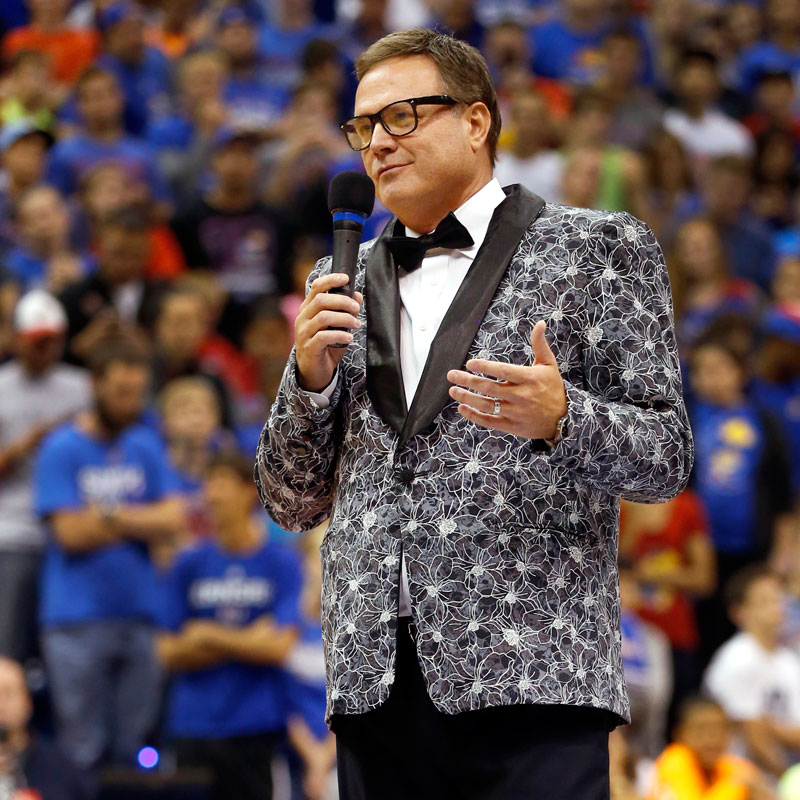 “I think my favorite moment about each Late Night I’ve attended is the atmosphere. And of course it helps with recruiting,” Self said.

When it comes to recruiting, far too often efforts are focused on grandiosity. While luxurious housing options and high-caliber weight rooms are promising amenities, they are minute details in comparison to the power Late Night has on swaying potential recruits’ decisions to commit.

“When I came to Kansas for Late Night, the brotherhood of it, going to Coach’s house and interacting with the other players is really what got me here,” Bragg Jr., said. “It was the best experience and definitely the best visit that I had.”

In addition to Late Night in the Phog, former Jayhawk forward Perry Ellis (2012-16) visited Memphis and Kentucky for their Midnight Madness-like events.

“They were very different,” Ellis said. “They are basically just playing, and we have the whole dancing part. I think that is what’s really cool and sets Late Night in the Phog apart from other schools.”

Late Night provides recruits with a first-hand experience in one of the most-famous college basketball venues in the history of this country. It gives potential Jayhawks a chance to imagine themselves suiting up, running onto the court through a fog-filled tunnel with ‘Kansas’ stitched proudly across their chests. A chance to be surrounded by the best fans in the NCAA. A chance to be exposed to an atmosphere like no other: the Phog.

“As a recruit, it’s almost overwhelming, seeing all the fans and hearing how loud they all get. Overall, it’s just a cool experience getting to watch all the players and see them do their thing for the first time of the season,” Ellis said. “You feel like it’s something you want to be a part of.”

Justin Wesley, a KU forward from 2011-14, shared a similar experience as a recruit. It was, “Unbelievable,” he said. “The atmosphere was electric and the anticipation was a lot to take in, in a good way.” 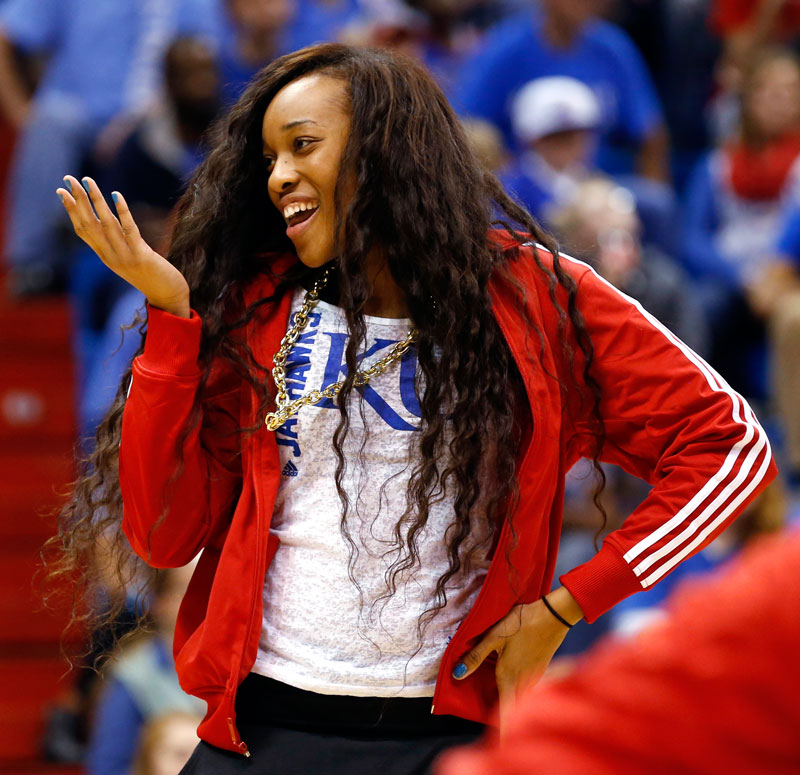 Every person who attends Late Night in the Phog for the first time has some type of memorable experience, and even a new coach is no exception to this. Last year was the first time Schneider had ever attended the event and he was blown away.

“My first Late Night, I was extremely proud to have the opportunity to be part of this program. To be part of the history of Kansas women’s basketball is really, really special to me,” Schneider said.

For players like Lucas who were unable to attend Late Night as a recruit, participating in it was the first real look into Kansas basketball for them.

“It was pretty cool to participate because it was the first time I got a chance to see the Fieldhouse packed with fans and be on the court,” Lucas said. “As a player that’s a cool experience to get out there in front of everybody. You get a sense of how supportive our fans are.”

Ellis added how important it was for the team’s newcomers to participate in Late Night.

“It’s their first time out there getting acclimated to what it’s going to be like to be out on the court that upcoming season,” Ellis said.

This event marks the beginning of a new season, a look into the year to come. It’s a continuation of the tradition and honor that come from the standard of KU basketball. Not only does Late Night provide a chance to see the skills and talent each player possesses through the scrimmage portion, but also their individuality and personality in the skits and dances.

“I started going to Late Night in 8th grade so it was always a dream to be on the other side,” Releford said. “Once I got the chance, I probably was as nervous as I’ve ever been in my life because I was out there doing something that didn’t involve basketball. But after you get out there and do your performance, the basketball part comes easy, because that’s something we’ve been doing all our lives.”

It’s definitely a toss-up whether the best parts of Late Night are the scrimmages or the dances. Getting a preview of each team’s potential brings both suspense and excitement for the upcoming season. On the other hand, the dances and skits display the fun and personal side to the student-athletes. Regardless, being on the other side and participating in Late Night has created lasting memories for current and former players alike. 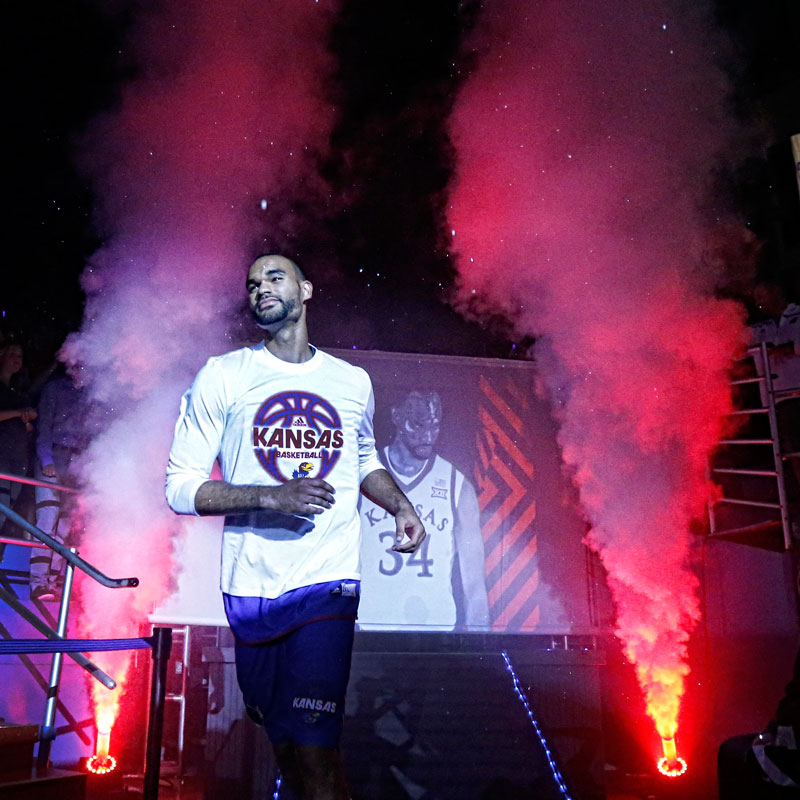 “The scrimmage is obviously the best part,” Wesley said. “That’s where the anticipation is. You finally get to watch the guys go at it.”

Despite Ellis’ hesitation with dancing, he said that it was actually his favorite part each year participating in Late Night.

“I wasn’t big on dancing and all that, but it was a chance for me to get out of my comfort zone and I think that was good for me,” Ellis said. “I just had a good time with it and it was fun getting out there for the first time in front of the fans, getting you ready for the season.”

Bragg Jr., agreed, the dancing portion was his favorite part of the night last fall in his first season as a Jayhawk.

“When we do our dances it brings out the personality of (each of) us, it adds a little fun to it all,” Class of ’15 Late Night recruit Bragg Jr., said.

“It’s probably our biggest weekend of the year,” Schneider said. “We try to take advantage of every opportunity to not only get recruits on official visits, but to try to get a lot of our younger players to come in unofficially.”

Self agreed with his counterpart on the importance of the annual event when he said, “Late Night is an unbelievable way to tip off what should be a very festive and successful campaign.”

Whether you’re a recruit or a fan, this is something you don’t want to miss. Not only is Late Night in the Phog a great exhibit of Kansas basketball, but the event also features music by the KU pep band, performances from the KU spirit squads and so much more.

“Late Night is a great jumpstart to get ready for the season, the kickoff. I’m excited and can’t wait for it,” Bragg Jr., said.

Being one of the 16,300 Jayhawks packing the Fieldhouse to capacity for 2016’s version of Late Night in the Phog will surely prove to be the experience of a lifetime for so many.