RCW: The road to Lawrence 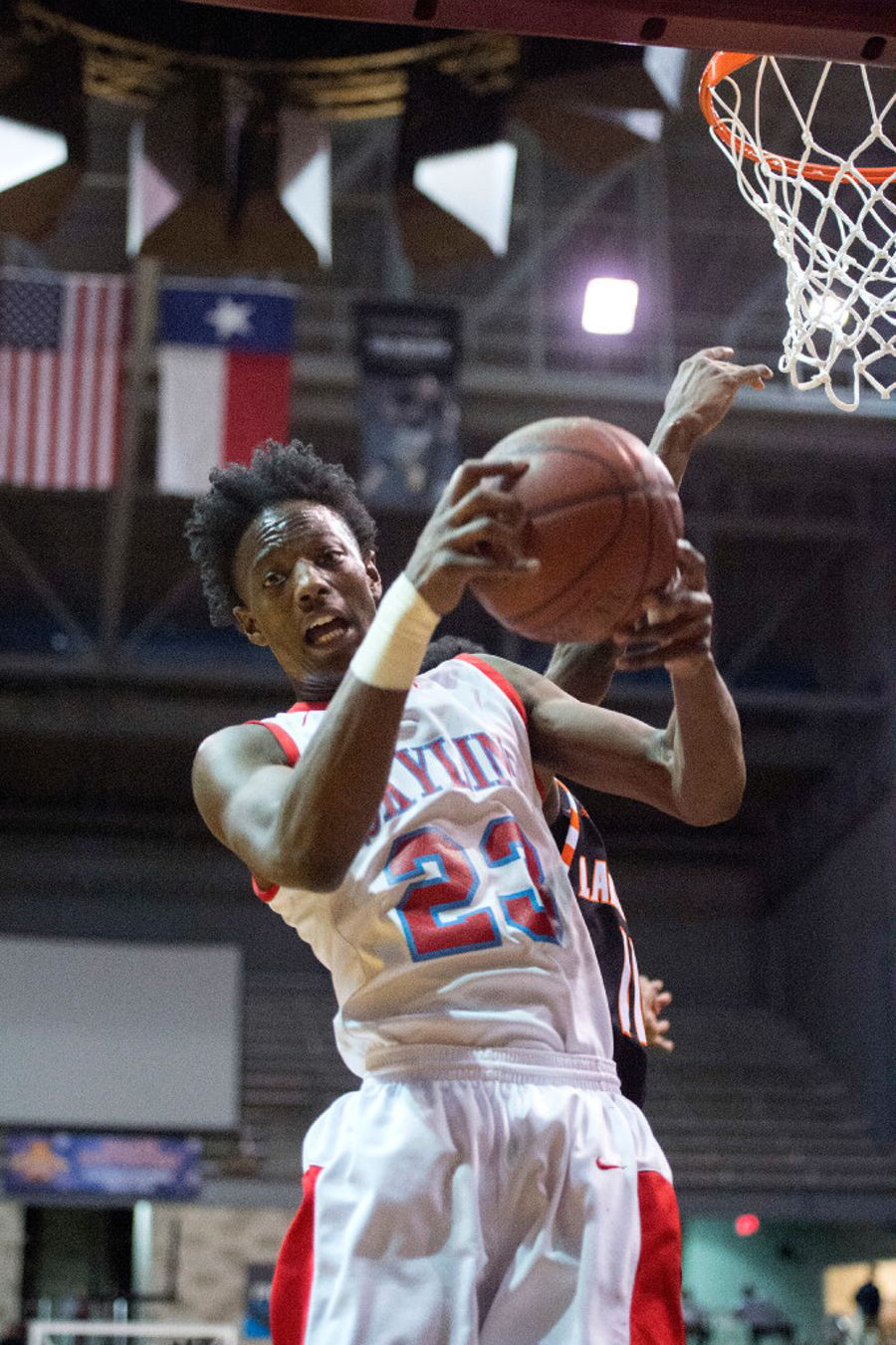 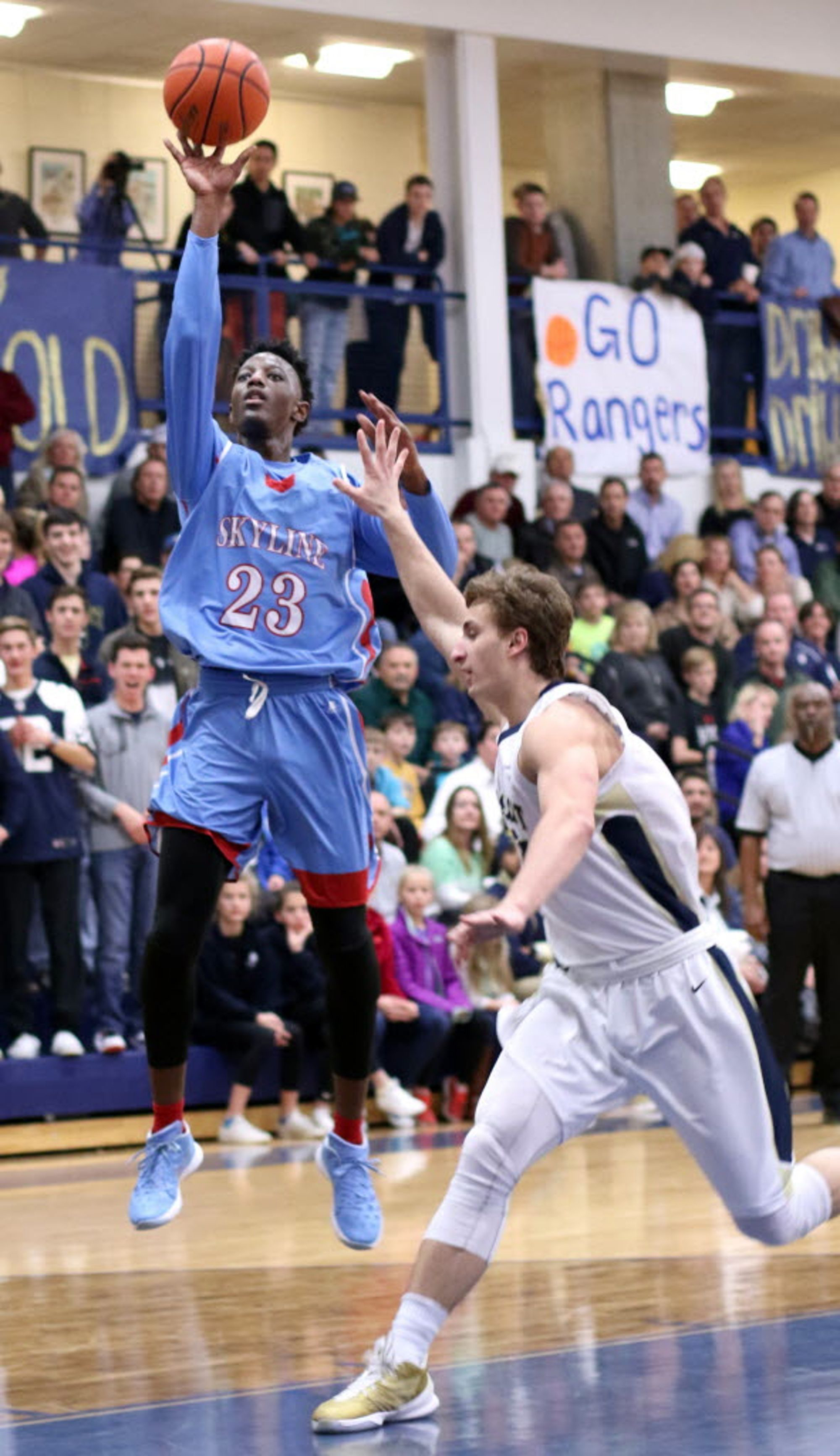 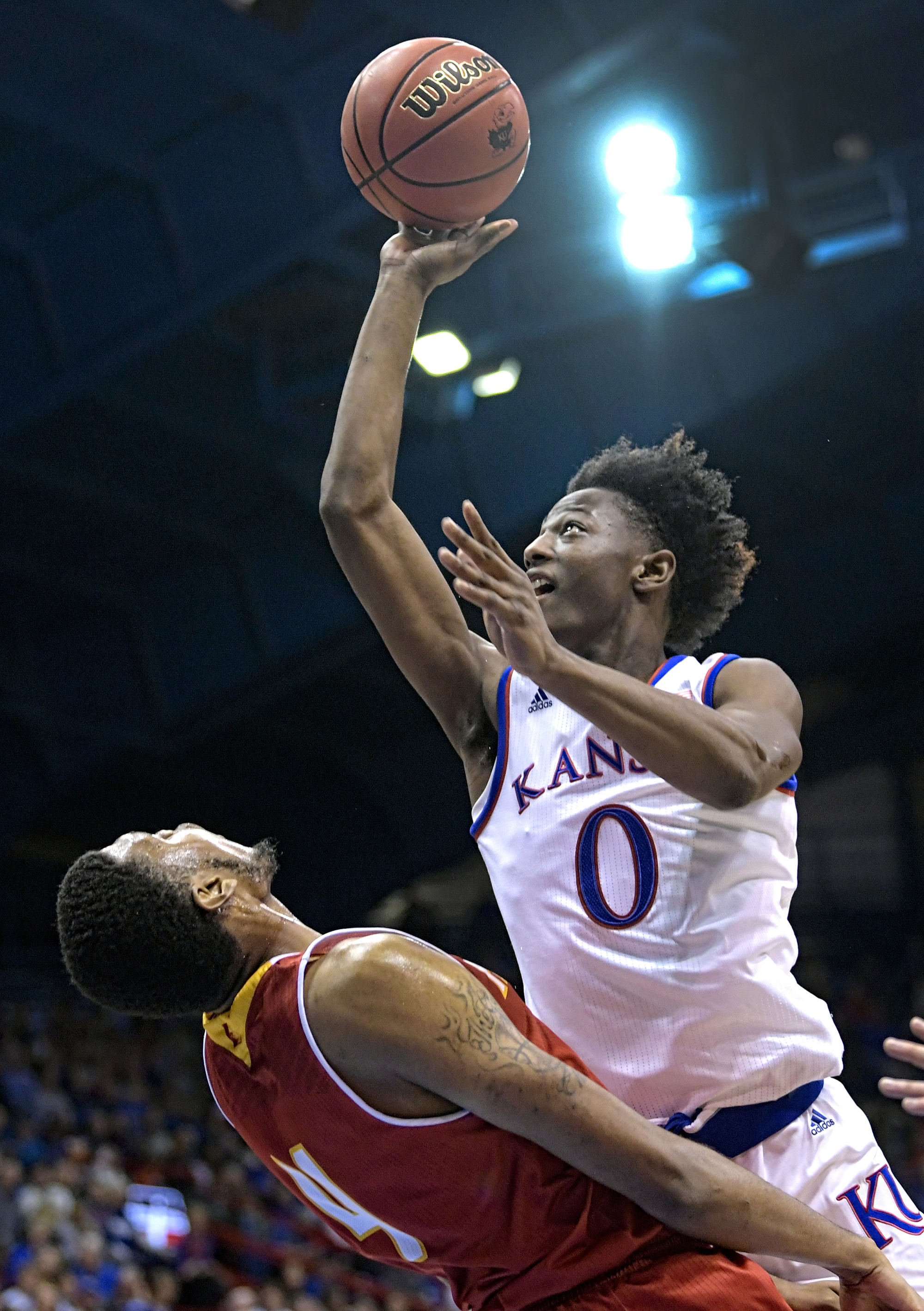 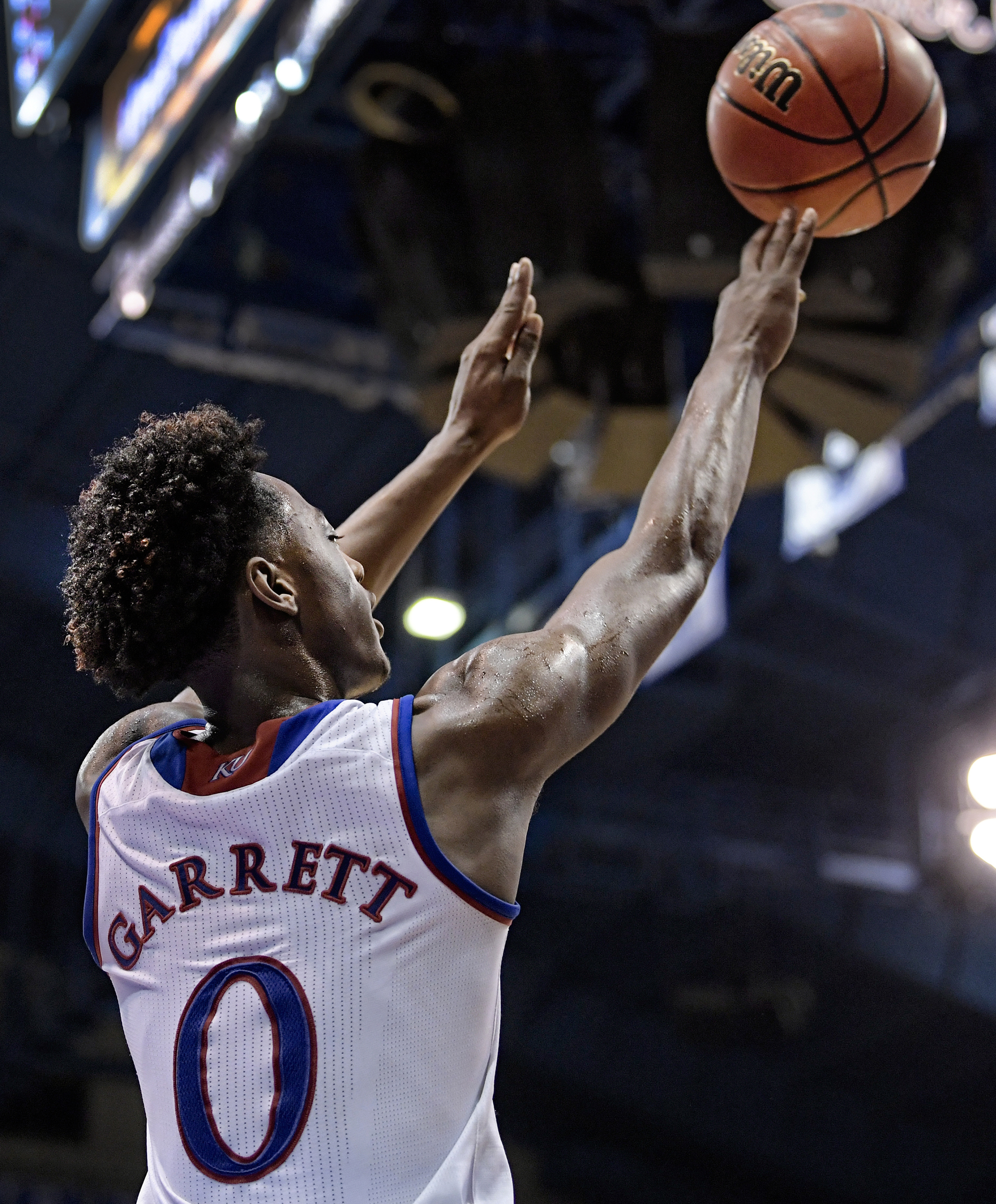 Watch Marcus Garrett play this season inside Allen Fieldhouse!
“It’s not what you know, it’s who you know.”

Most people are familiar with this popular adage. The story that brought University of Kansas freshman Marcus Garrett to Lawrence can be chalked up to this phenomenon.

Kansas was one of many schools (Baylor, Arizona, Oregon and Iowa State, among others) vying for Garrett’s tremendous talents out of high school. A Dallas, Texas, native and Rivals’ 44th-ranked player in the class of 2017, Garrett relied on counsel from his high school coach, Paul Graham, his family and his own personal research to determine where he would continue his illustrious basketball career.

It was the quality relationship between Graham and Kansas head coach Bill Self that played a fundamental role in Garrett’s decision to don the Crimson and Blue.

“My high school coach (Graham) is good friends with Coach Self,” the 6-foot-5-inch guard said. “I knew once they started recruiting me that this was the place I wanted to be. It felt like home just talking to them through the phone.”

Clearly, the recruiting process is largely contingent upon relationships. In this case, it was a relationship that evolved over 25 years ago that helped the Jayhawks land Garrett.

“Bill and I worked together at Oklahoma State for two, maybe three, years,” Graham said. “We became really close, good friends. Bill has helped me a lot throughout the years.”

Graham and Self served as assistant coaches together on Eddie Sutton’s staff from 1992-93. In having such a strong relationship, Graham was able to advise Garrett on Self’s personal character, and his expectations for players.

“Coach Graham just told me how Coach Self coaches, what I can expect, that Coach Self will want what’s best for me,” Garrett explained. “So, I knew he was the type of coach I wanted to play for.”

Long before Garrett had the opportunity to take his talents to the collegiate level, he was an eighth grader with a plethora of potential.

Graham shared his first memory of Garrett, “Marcus’ uncle brought him in and said, ‘This is our nephew and he wants to come to Skyline.’ So, I had never seen the kid play and I’ve got all my guys in the gym, juniors, and seniors, but I said, ‘Sure, put him out there and we will see what he looks like.'”

Despite never having heard of Garrett, Graham was instantly impressed, “He got the ball off a rebound—tall, skinny kid– and he takes the ball down the floor, a guy tries to steal it, he goes behind the back and drives to the basket. Marcus sees a guy cutting to the hoop and threw a one-handed bullet to the guy cutting and I jumped straight up and said, ‘DANG.’ Then he got another rebound, goes down the floor, throws the ball to somebody and I said, ‘Who the heck is he throwing the ball to?’ Then, out of nowhere, a guy catches the pass and lays it in.”

That was all Graham needed to see before concluding that Garrett was something special. Garrett was added to Dallas Skyline’s varsity roster immediately as a freshman in 2013.

It was not long into his freshman season that Graham planted the seed in Self’s mind regarding Garrett’s potential.

“I told Bill when he (Garrett) was a freshman that I had a kid who would be able to go to any school in the country,” Graham explained. “Bill sent Coach Howard (assistant coach Jerrance Howard) down and they started watching him. Every year they were down. Coach Howard did a great job recruiting. The more they saw him, the more they fell in love with him.”

It wasn’t all sunshine and rainbows for Garrett at Skyline though. According to Graham, “He had his butt chewed out too, so he was ready for that with Bill.”

Upon finding out that the youthful Garrett was misbehaving in his English class, Graham seized the opportunity to teach him a hard lesson with the District Championship looming.

“When Marcus came down to the gym, his uniform wasn’t out,” Graham explained. “I told him, ‘Marcus you can’t play here man. You need to take yourself someplace else, because I’m not going to allow you to be disrespectful to other people. So, you can’t play. You can transfer, but I’ve got one rule here at Skyline and that’s you do what I tell you to do. That’s it.’ I didn’t play him in the championship, he sat in the stands that night and fortunately we won the game.”

Despite the early conflict, the two remained very close and still communicate despite how Garrett’s high school career ended.

“He and I have a great relationship,” Graham stated. “We love one another, won a lot of games together and our record while he was here was probably 106-15.”

Garrett credits Graham for helping to develop him into the player he is today. According to Garrett, it was Graham’s philosophy that focuses on playing together, defending and rebounding that helped to take his game to the next level.

“He always said, ‘If you defend, rebound on both ends of the floor and play hard, you really shouldn’t lose,'” said Garrett of Graham. “It’s just something we lived by in high school and I was able to bring to Kansas. He was big on making the extra pass too!”

Obviously, having a high school coach with college coaching experience is invaluable to a young athlete. A great deal of Garrett’s early success at Kansas can be credited to the accountability and teaching he received from Graham during his prep years.

Self expressed the confidence he had in Garrett coming from Skyline, “Coming from the situation which he was in and knowing his high school coach so well, I felt his chance to have a fairly seamless transition was high.”

Graham felt that his primary job was to help develop Garrett into a man.

In regards to playing for Graham at Skyline High School, Garrett said, “I knew the things we were doing weren’t for regular high school players, for I already knew it was college themes and I just soaked it all in. It was tough playing for him, I mean he expects so much out of his players.”

The years of tough love and hard work paid heavy dividends for Garrett. To begin, he announced his decision to attend the University of Kansas right before the start of his senior campaign at Dallas Skyline.

“Once I saw the tradition, I really couldn’t turn it down,” Garrett proclaimed. “So, I just woke up one morning and told my uncle I wanted to commit to Kansas.”

Upon making the biggest decision of his life up to that point, Garrett was then able to devote all of his focus toward his final season with Graham at Skyline. What resulted was a season full of wins and accolades for the duo.

In 2016-17, Skyline finished 32-3 and the 6-foot-5 guard led the Raiders to the Class 6A state semifinals, all while accumulating 32 double-doubles and 12 triple-doubles in the team’s 36 games that season.

“Marcus will do whatever it takes to beat you and he makes everyone around him better,” Graham emphasized while discussing Garrett’s career at Skyline. “He’s not in it to get his name in the paper, he just wants to beat you. He’s got a high basketball IQ.”

While all the achievements and attention would inflate the ego of most young men, Garrett remained even-keeled.

“He’s such a great kid, I love him,” Graham lamented. “Marcus is a wonderful person and he’s got a good head on his shoulders.”

Even when asked what his vision is at the University of Kansas, Garrett responded with team-oriented goals, “To win a National Championship and to keep the streak (of Big 12 Championships) alive. I really don’t set personal goals, I just let them come.”

“He’s got to do some things to maximize his abilities, but I do think he does many little things and he knows how to do many little things that most freshmen do not know,” Self stated regarding Garrett’s talent as well as his future as a Jayhawk and beyond.

It’s abundantly clear that the Jayhawks struck gold in landing Marcus Garrett. The freshman’s impact through 17 games cannot be understated.

Between his defensive prowess, calm demeanor and team-first attitude, Garrett is certain to be an impact player for KU for years to come–thanks in large part to a relationship that was conceived in 1992.

Fortunately for Kansas fans, the legend of Marcus Garrett has just begun.