RCW: The Student in Student-Athlete 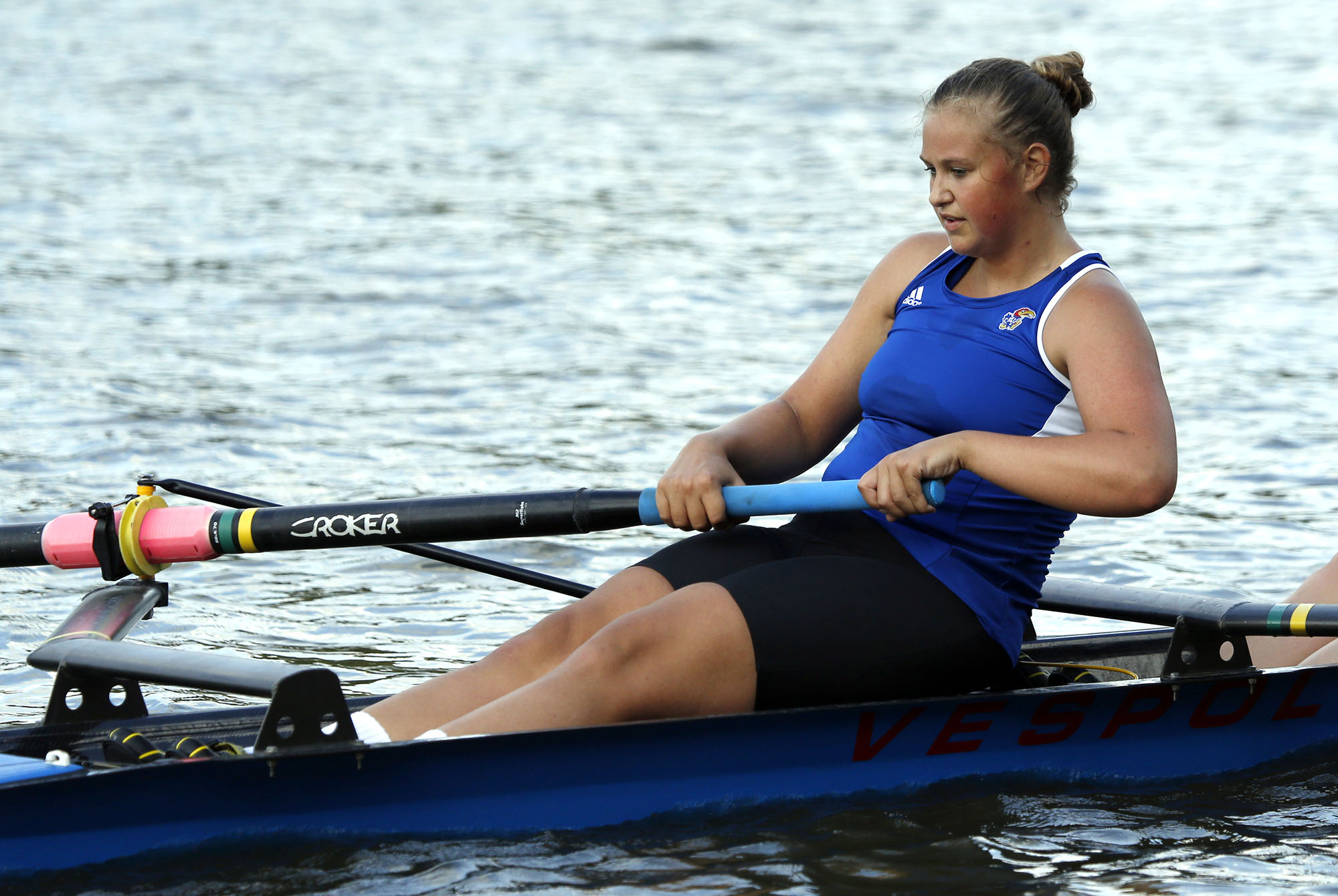 With 32 different courses of study among the 64 student-athletes on the University of Kansas rowing team, there’s no denying the value and importance that the Jayhawks place on academic excellence.

Student-athletes on the rowing team have majors ranging from journalism to pre-med to engineering to sport management and everything in between. The rowing coaching staff makes sure to emphasize life beyond the boat and encourages student-athletes to pursue a degree in whatever field that they’re passionate about.

“I think that our coaches really do a good job at valuing our academics,” senior coxswain Bailey Coolidge said. “Our coaches do a really good job at taking whatever major you want and saying, ‘Okay, we’ll work with you.’ I’ve never seen them try to push someone toward a major that they never wanted to be in.”

KU rowing prides itself on its diverse majors and academic success in those different areas.

“I think we’re a very diverse team in regard to our majors, so we personally take pride looking at how many majors we have and then looking at our GPA (Grade-Point Average),” Coolidge said. “When you have over 60 women with a wide variety of majors, it kind of gives you personal satisfaction that we can cover every base and do well in every base.”

Posting a 3.23 team GPA, the eighth-best GPA out of KU’s 18 Division I sports for the Fall 2017 semester, the Jayhawks look to continue making strides both on the water and in the classroom with several rowers looking to pursue post-graduate degrees.

Both Coolidge, a sociology and psychology dual-major and redshirt-junior Meghan Karoly, an exercise science major and psychology minor, are hoping to earn master’s degrees following their graduations from KU.

Karoly found out in September she was admitted to the physical therapy program at KU Medical Center.

After making a couple of major and class changes, Coolidge relied on interim head coach Carrie Cook-Callen for support and mentorship throughout her college career.

“She has been a mentor and provides a lot of support,” Coolidge explained. “I can talk to her about my major changes and class changes. This is the rest of your life, so you need to make sure you’re making the right decisions.”

Coolidge has finally nailed down exactly what she wants to do, but is still determining the best method and which master’s program to enter to reach her goals and Cook-Callen will be a part of the process every step of the way.

“I want to do health administration with insurance, so I’m just trying to figure out what master’s would be the best,” Coolidge explained.

“The coaches are super understanding and encouraging of our future because a lot of us aren’t going to go pro or to the Olympics or anything like that, so your college education is the most important part of you being at college,” Horosz said.

Being a member of Kansas rowing provides a great outlet outside of the classroom, while Horosz receives the support she needs from her teammates inside the classroom.

“Rowing is, of course, really fun and a good outlet, but I think they’re really good about focusing on academics and then, of course, we all encourage each other in the classroom,” the Olathe, Kansas native said.

Although Horosz has had a good idea about what she wants to pursue in the future since high school, being a member of KU rowing has only increased her passion for civil engineering.

“Rowing on the water and then learning about water cleanliness and how we keep all of our lakes and oceans swimmable and drinkable is really neat,” Horosz said.

Horosz hopes to carry her environmental passions into a management position for a larger company one day and in order to do that, she has to stay motivated.

“Sometimes that (to stay motivated) is a little tough, but I’d say knowing this is for my future and just knowing the women on the team that are also really driven (helps). And (we) are pre-med and all sorts of other majors that are prestigious. I guess, in a way, having that encouragement and realizing they’re doing it, I can do it too,” Horosz explained.

Junior Kristen Underhill, an economics major, has taken the tools and skills that being a student-athlete has provided her and applied them to her internship endeavors.

“I’m trying to get an internship right now with this company that takes all of the loyalty cards and it takes what they buy off of that and turns it into a marketing strategy,” Underhill said. “I think it would be cool to get other feedback from different companies and then try to make it into something where I can grow even further.”

While Underhill and all of the KU rowers are on the right path to excellence in their future careers, they are currently being recognized for their academic accomplishments.

Recently, two KU rowers were honored with the Dr. Gerald Lage Academic Achievement Award, which requires at least a 3.8 cumulative GPA at the time of nomination. Karoly, along with Kaelyn Thierolf, a senior secondary education major and psychology minor were named honorees along with 12 other Kansas student-athletes. Kansas tied with Oklahoma and Oklahoma State for the most student-athletes receiving the award.

It all comes down to finding your routine.

“I’m a very ‘scheduled’ person,” Coolidge said. “I think all my teammates would agree that being able to balance sports and school all comes down to being in a routine. I plan to do things at certain times and I do those things at the same time every day and I think that’s helped a lot.”

Horosz agreed that scheduling, group studying and tutoring services have all played a role in her success academically as a student-athlete.

“The perks of having the tutoring services has been helpful,” Horosz said. “It also helps having a really good schedule, so I know exactly when I need to get my homework done. I like the schedule aspect and then I study with my friends on the team too on the weekends, so just keeping each other accountable (is key).”

Karoly takes advantage of having classes with her teammates to ensure she can reach her academic goals.

“Rita (Margret Winter) and I have the same major, so we have classes together each semester. Having that support system and knowing someone that is doing it with you makes it a lot easier,” Karoly said. “Last year this time we were taking BioChem together and we’d always quiz each other during practices. It’s just nice to have that support system with you at practice and in class.”

Whether it’s in the classroom or on the water, Kansas rowing will continue finding success with the support and encouragement of its teammates and coaches.