Kansas junior Carson Vickroy is sharpening his trade in both of his passions – running and weather – aiming to make a difference for Kansas cross country and forecasting as a future meteorologist. 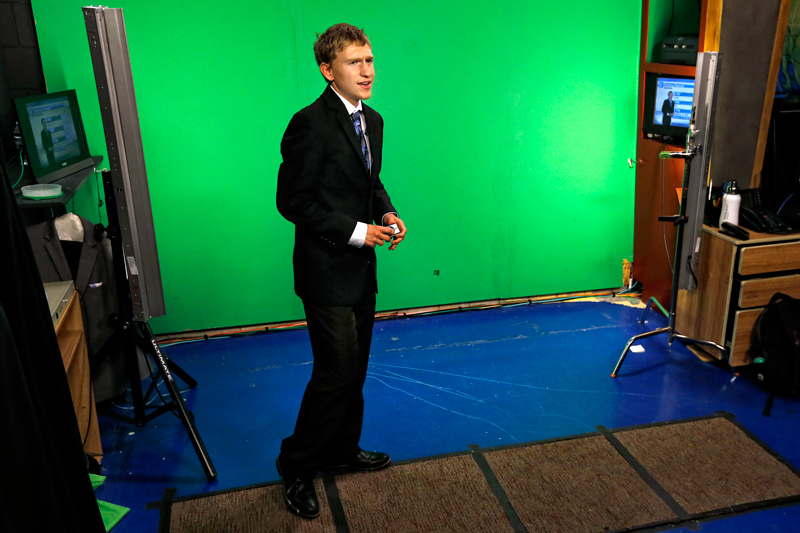 Wind is an unpredictable force of nature that can be delightful or destroying. The breeze created by an autumn morning jog is refreshing while winds resulting in a tornado can take down entire buildings. Kansas junior Carson Vickroy loves both sensations equally.

The breeze of a brisk run and the gusts of a powerful supercell met during a summer track meet in Mineral Wells, Texas, just west of the Dallas-Fort Worth Metroplex. It was there, participating in his first passion of running, Vickroy witnessed his first tornado as a fourth grader, solidifying an interest in his second passion for weather.

“It was a little scary but that definitely was one of the things that got me going,” said Vickroy.

The Coppell, Texas native is cultivating both at Kansas, working on his running craft as a frequent contributor to the men’s cross country team’s scoring lineup while studying atmospheric sciences with plans of someday becoming a meteorologist. He’s already predicting weather as an amateur forecaster with a social media following around his personal brand of “World’s Fastest Weatherman.”

The Mineral Wells tornado, coupled with in-depth coverage of Hurricane Katrina, offered an experiential exposure and love of weather, much like his start to running. In second grade, Vickroy participated in an activity day at school where students ran around a track collecting “toe tokens” for each lap completed.

“I wasn’t expecting anything. I didn’t think I was athletic,” said Vickroy. “I thought I’d be the geeky kid on the playground. I ran that day and I actually ran more laps than anybody else did and I was like, ‘Huh, I’m kind of good at this.'”

From there he joined track clubs, school teams and ran 5k races with his family. It was his sophomore year of high school when Vickroy started tracking mileage and times and his steady progression through his prep career started to open more doors.

“Really, my senior year it was like, ‘Wow I have the potential to be a Division I athlete.’ Not very many people can say that,” said Vickroy.

He was right. He lettered eight times in high school between cross country and track & field while earning attention from several schools, including Kansas. A runner-up finish in the 3,200-meter event at districts and being voted team MVP rounded out his high school accomplishments. 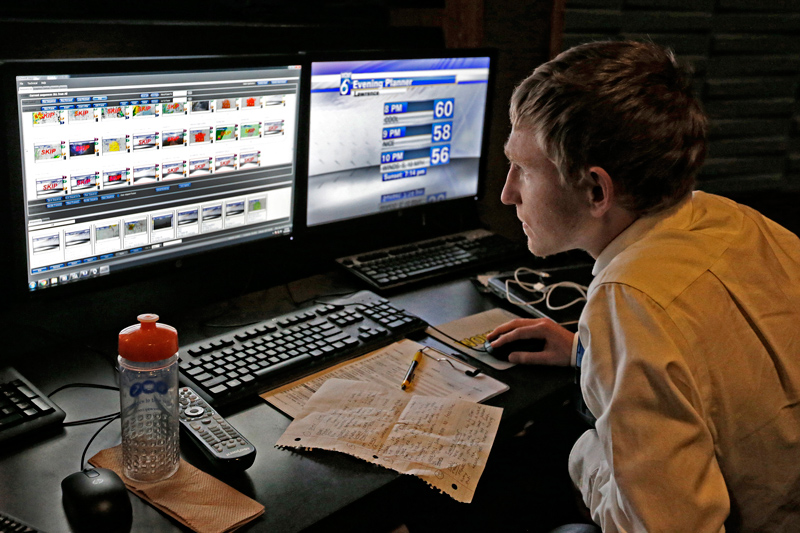 When it came time to start looking at colleges, Vickroy had his map set for him. Taking I-35 north from Texas enters the heart of Tornado Alley. Texas, Oklahoma and Kansas, among other Midwestern states, are in a precarious spot for active weather. Tornadoes and other severe storms in the Alley happen when cool dry air from Canada and the Rocky Mountains mixes with warm moist air from the Gulf of Mexico. There is perhaps no better way to learn about weather than being in the heart of it all. That atmospheric volatility, KU’s cross country program and the intimate, more personalized atmospheric science program made the Jayhawks a perfect fit.

“Kansas was really the best one because the program is relatively small,” said Vickroy. “(Kansas distance coach Michael Whittlesey) really seemed to be interested in me and having me come out for the team. So Kansas was the perfect choice. With the program being small you can get more individualized help from your professors which really attracted me to it.”

Vickroy’s love of both weather and running are perfectly combined in Lawrence where there truly are four seasons and the weather ranges in extremes from a record high of 114 degrees to record snowfall of 18 inches, though those occurrences are rare. It’s often said if you don’t like the weather in Kansas, just wait an hour for it to change. For the aspiring weatherman, the variety is a welcome change from his home’s regular streak of double-digit days with triple-digit heat in the summer.

“Running in the elements just makes it sweeter,” Vickroy said. “The coursework, it gets hard, but when you’re actually out there running in zero degree weather it’s crazy.”

His classroom coursework gets tough as well. A bachelor of science degree in atmospheric sciences requires 124 hours, with 94-95 hours coming from a general requirement core that includes classes like advanced synoptic meteorology, remote sensing and operational forecasting, on top of the usual chemistry and general physics. The cross country team at Kansas expects top performances in the classroom and on the trails, but there is always a helping hand. The team arranges study groups to help meet team grade point average goals, something that’s been beneficial to Vickroy in his three years on campus.

“We definitely have some guys who are driven academically and obviously everyone is driven athletically,” Vickroy said. “Chris Melgares does a great job of balancing athletics and academics, Mike Melgares is the same way. Some of our better leaders on this team have had success in academics and can really help some of our underclassmen that way as well, getting study groups together and making sure everyone stays on track academically. Not only is that helping our team from a team GPA and just overall academic standing, it helps bring us closer together as a group. We’re not only seeing each other at practice, but also looking out for each other academically as well.”

Vickroy is among those leading the cross country team in academics and was named to the Academic All-Big 12 First Team his sophomore year in 2015. He also credits Kansas Athletics’ academic resources for helping him stay on track even with a rigorous travel schedule.

“We have great counselors who will proctor exams on the road and tutoring is great,” Vickroy said. “For lower-level classes, the first couple of levels of calculus I had to take, tutoring really helped me through and be successful.” 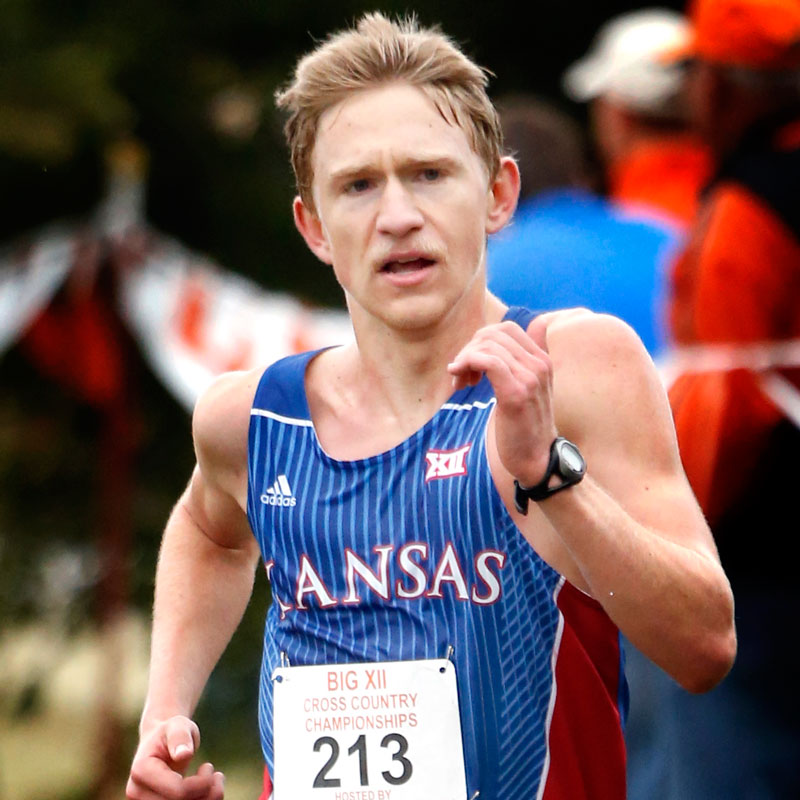 It’s part of a competitive make-up for Vickroy, something that will surely benefit him in his push to be the best weatherman on television, and has already paid dividends on the trails.

“Carson is a very hard worker and has had moments of racing very well,” Whittlesey said. “His first year in cross country he ended up being our fifth guy in a lot of meets. He competed really tough because he was in situations where he would be running alone and he didn’t have teammates to help him through it. He really showed a lot of fight early on in his freshman year in those situations.”

Though Kansas has tornadoes and is culturally notorious for tornadic activity, Texas, Oklahoma and Florida actually lead in the number of tornadoes in different capacities. By number, Texas has the most; Oklahoma sees the highest number of strong tornadoes; and Florida leads in the ratio of tornadoes to land mass. These are all facts Vickroy is happy to talk about with anyone who will listen, particularly his teammates.

“As every weatherman does, he gets blamed for whenever we have bad weather days,” Whittlesey chuckled. “As soon as you start talking to him, he’s ‘The Weatherman,’ the meteorologist guy comes out and you feel like you’re listening to an educated TV weatherman. He really wants to explain everything, which I enjoy from the geeky side of things. I definitely enjoy learning more about it.”

Vickroy’s love of running and weather has led him to opportunities for his future. He currently predicts weekend forecasts and helps with graphics for 6 News Lawrence after connecting with former Channel 6 weatherman Rick Katzfey on Facebook. Vickroy can be found on social media as the self-proclaimed, and yet un-challenged, “World’s Fastest Weatherman.”

“I guarantee you there’s not another meteorology major that can run a 5k faster than I can,” said Vickroy, who has a top 5k cross country time of 14:58 at KU. “It actually got almost 300 followers. I was posting stuff to my personal page, so I just decided to make it my own brand.”

In the summer of 2015, Vickroy was driving to Lawrence to visit with Katzfey and Channel 6. Just before reaching the destination, Vickroy found himself accidentally storm chasing on the outskirts of a Kansas summer thunderstorm.

“My dad shot me a message, I was about an hour out, and he said, ‘Wow this storm is looking impressive on the radar,’ so I looked at the radar and it was showing signs of rotation and I could see it out my car window,” Vickroy said. “So I pulled over on the interstate and I saw the wall cloud and a lot of rotation with it. It was really cool to see.”

Vickroy grew up watching Pete Delkus, chief meteorologist at WFAA in Dallas near his hometown. Delkus was also a student-athlete, an All-American baseball pitcher for Southern Illinois University Edwardsville before spending six years in the Minnesota Twins’ minor league system. Vickroy dreams of a career similar to the Emmy Award-winning meteorologist.

“I hope my development as a meteorologist, especially in the broadcast industry will be a lot like his was,” said Vickroy. “To be in a top-five market, that’s big time. I can only hope and pray that my development will be like his.” 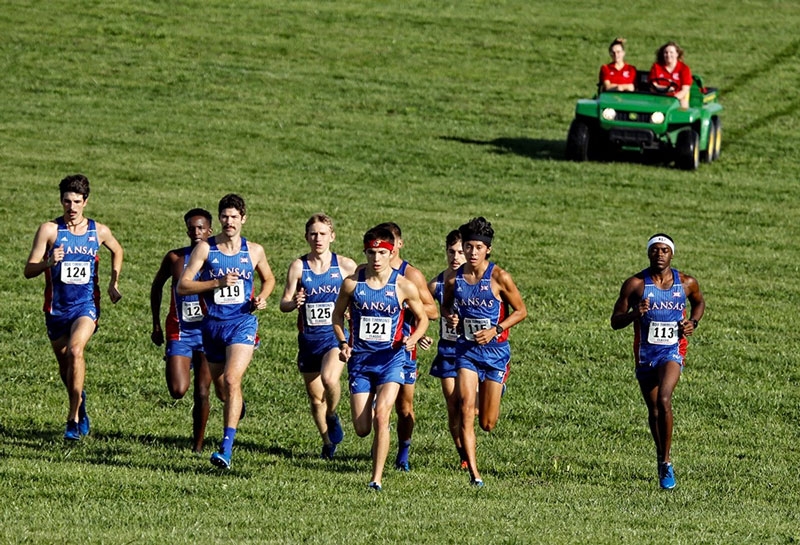 Athletically, Vickroy and the Jayhawks got off to a strong start in 2016 as he placed fifth while the Jayhawks won the Bob Timmons Dual Classic on Sept. 3. He was a top-five performer as a freshman as Kansas advanced one individual out of the NCAA Midwest Regional, but wasn’t in the scoring mix last year when the men’s team climbed to seventh overall.

Much like the women did in using a youth movement to propel the team to its first NCAA Championship berth in 21 years last season, Vickroy and the men are looking to continue their rise this year when the squad next takes to the course at Rim Rock Farm Oct. 1. That’ll be the team’s last scoring run before the Pre-Nationals Invitational on Oct. 15 and the Big 12 Championship on Oct. 29.

“On the men’s side, we lose to exhaustion of eligibility and graduation our top-two runners from last year, both of whom individually qualified for the NCAA Championships,” Whittelsey said. “But we return a very young, seasoned group. Several of them scored at the Big 12 Conference meet, some of them got to the NCAA Regional meet last year in track, and a couple of them got very close to getting to the final weekend at the NCAA Championships.”

As for the future, there is no question that Vickroy will be on a television somewhere, forecasting the weather. His goal is to stay in the Midwest, preferably his home state of Texas, but he wouldn’t mind Colorado and predicting snow storms either. Wherever it is, his goal is to be accurate and of course fast, similar to his goal in cross country and track.

“I want to be somebody that people go to and they trust and who can predict the weather successfully,” Vickroy said. “I want to be the person who gives that extra time before a warning, even before one has been issued.

“I want to be there for people who are in an area where they can’t get that notification on their phone, but they have that TV there. I want to help in whatever way I can so people can live worry free from the weather. It’s a long way off, but I want to be somebody that people will skip looking at their phone and actually turn the TV on to watch me do the weather, and watch me predict what’s happening.”

Vickroy might be tough to catch on the trails, but he’s easy to catch forecasting weather and tracking storms.