RCW: The Miles that Make the Race 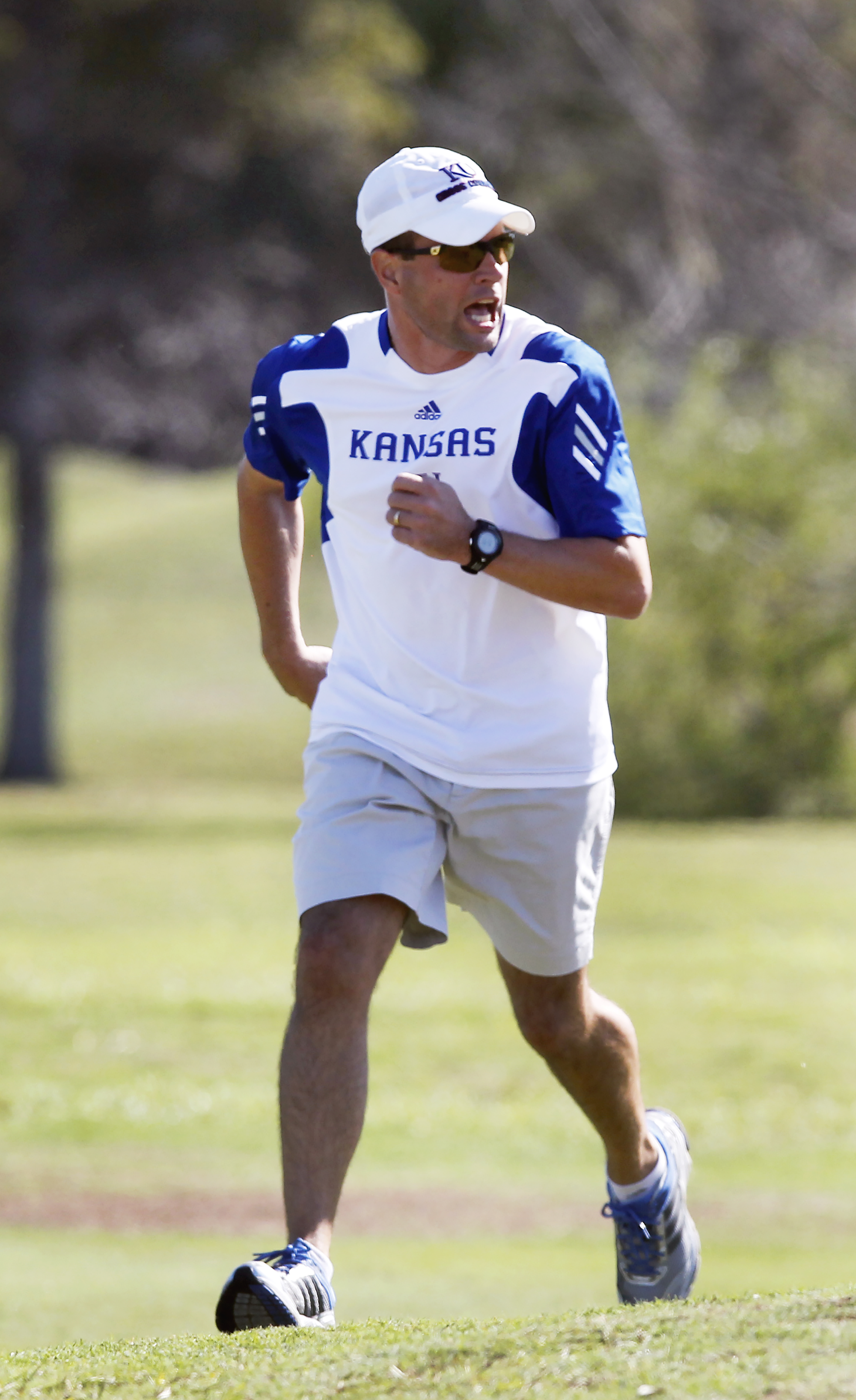 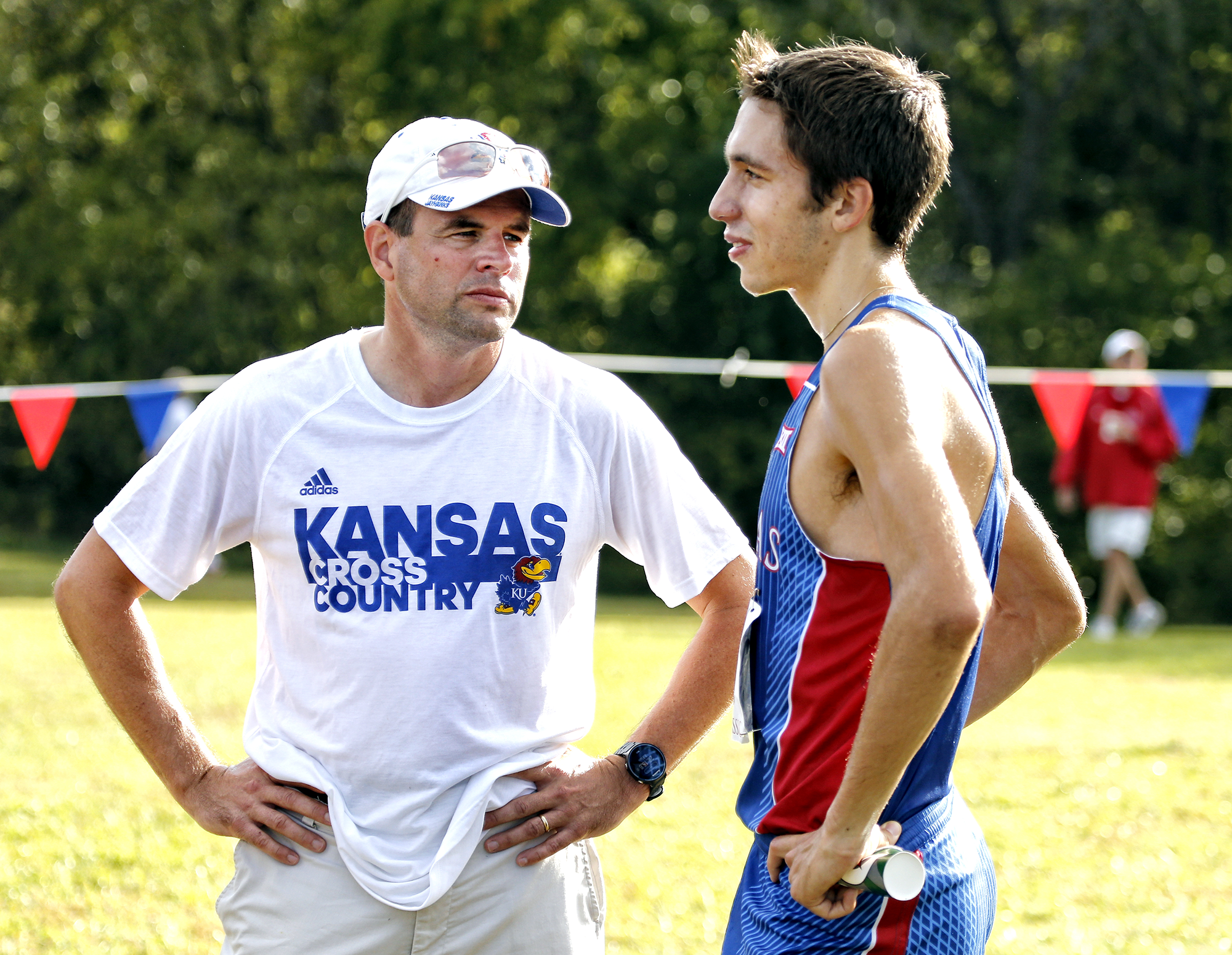 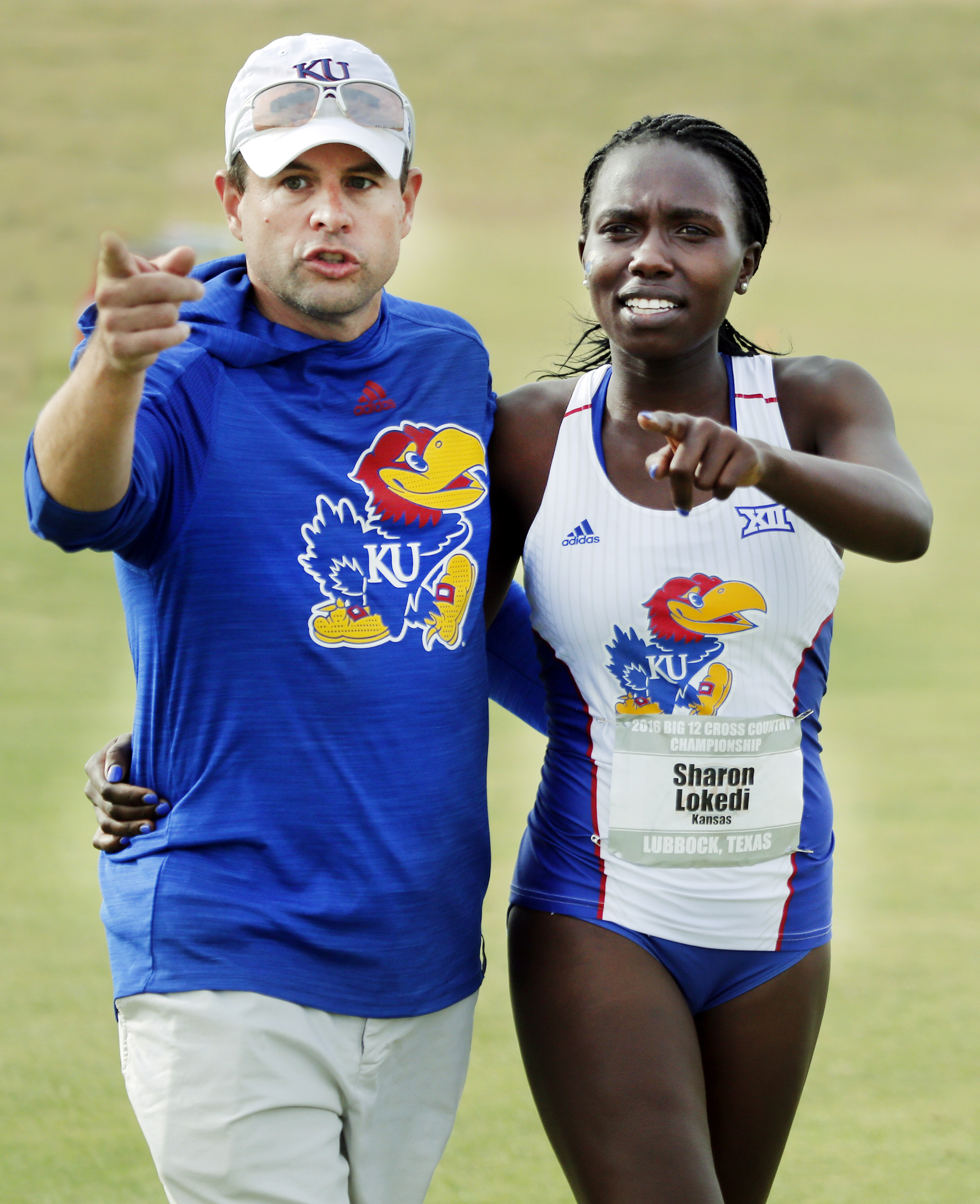 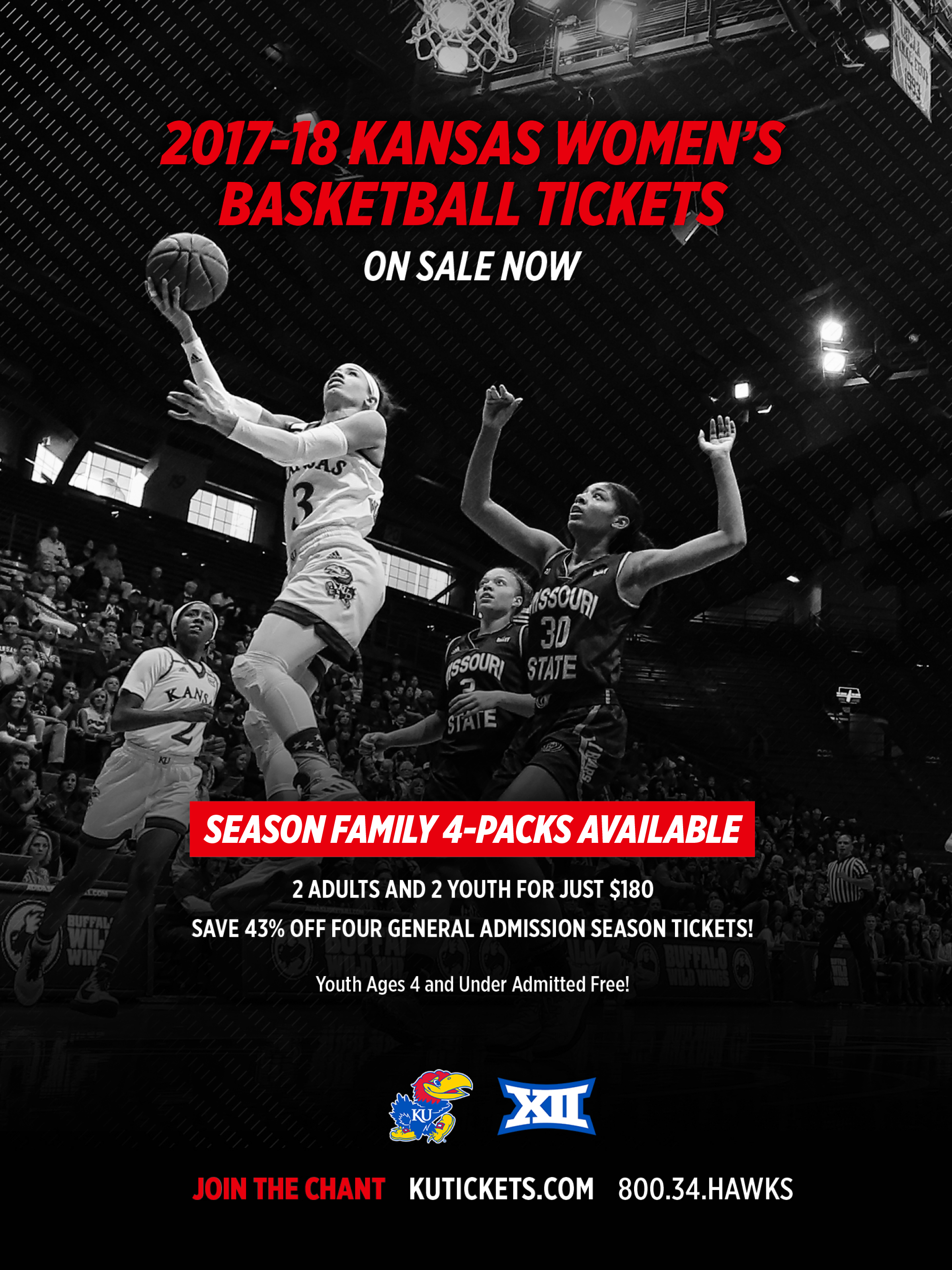 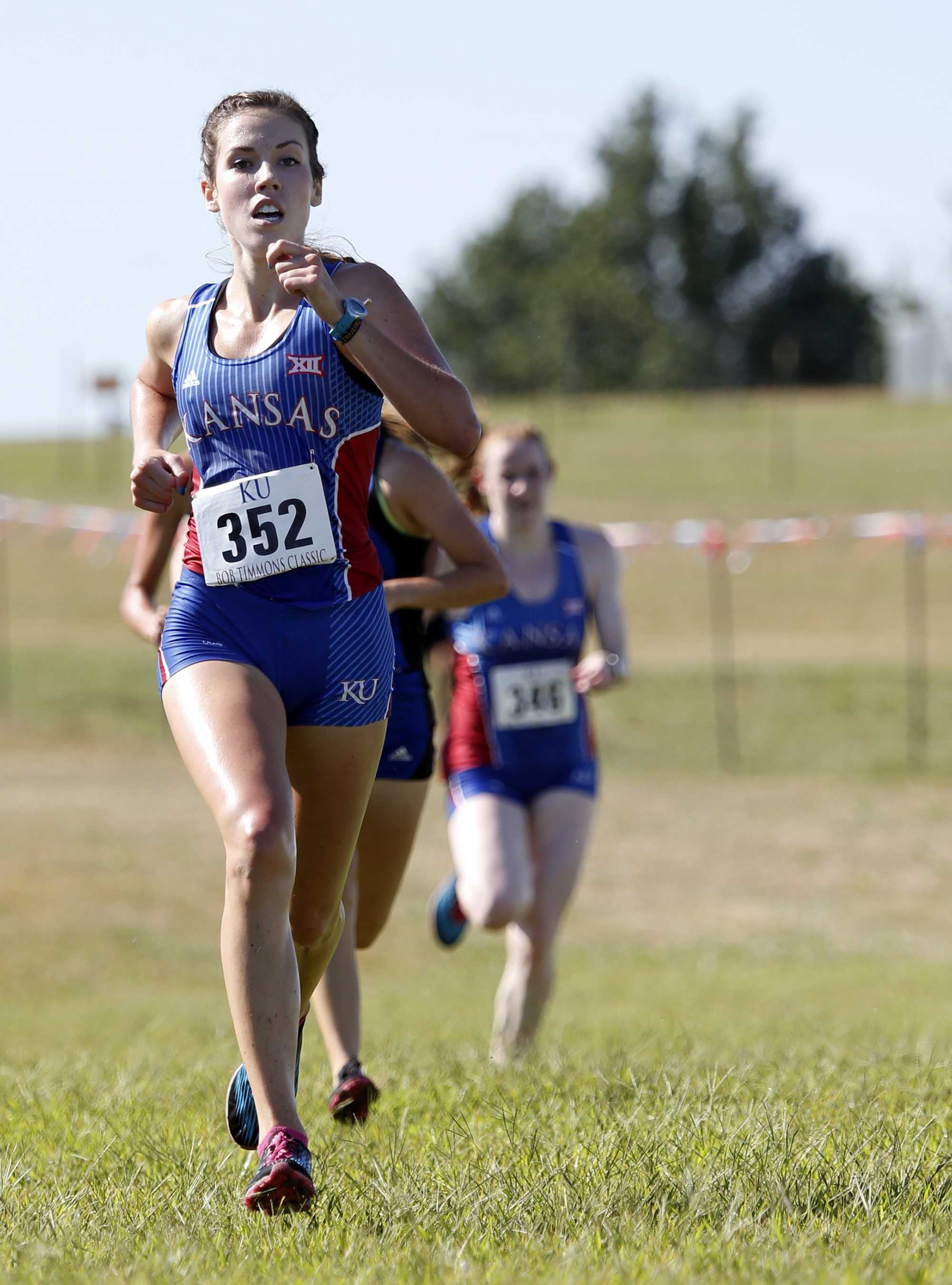 The Kansas cross country team embodies what it looks like to be dedicated collegiate runners. Through thousands of miles, hard work, grit and a strong mindset dedicated to bettering oneself, and furthering their goals these collegians prove what it means to be a Jayhawk.

The training that a student-athlete endures is often well-respected, but the degree of intensity of that training is unknown by many. For runners Sharon Lokedi, Alaina Schroeder and Chris Melgares and the rest of the Kansas cross country team, the process of building that mindset entails 40 to 100 miles per runner, per week. These averages totaled up for the entire year exceed more than 2,802 miles – a distance that amounts to the miles it takes to cross the entire continental United States. While the public only sees one race per meet and five meets per year (six if the runner makes it to the National Championship meet), the athletes see different paths, roads, tracks and weather on their way to success. Five times to prove themselves in the face of thousands of miles of work. Five opportunities to better themselves.

Depending on the age, along with what point the athlete is at in the season, each cross country runner works to find their perfect distance they are running during the week. Throughout the season they strive to rise and build in the number of miles they are running on a weekly basis.

Averaging 100 miles per week, Melgares tallies the most miles on the team and knows it has been a gradual process, worked up to throughout his years as a Jayhawk.

Kansas assistant coach Michael Whittlesey aids each runner by building up distance and the amount they are running week by week, personalizing the volume of mileage to the athlete’s body and endurance.

“We sit down with Coach at the beginning of the season and he will lay out a mileage plan for us,” Melgares said. “When you first get here as a freshman, that’s based on what you did in high school. He’ll start you at a good starting point and listens to how you adapt and he’ll listen to your feedback. Based on that first plan he gives you he’ll adjust, so if you handle it really well he’ll start increasing it more as you get older. You’ll sit down with him usually three or more times a year and that’s really when we get our assigned mileage.”

With Melgares running at his highest average of around 100 miles per week, that balances out to approximately 400 miles per month and 5,200 miles in a calendar year. Melgares is just 24 miles short of running the total distance east to west of the state of Kansas (437 miles) in just one month. His mileage is equivalent to running the distance of the United States one and 3/4 times in one calendar year.

While Melgares has the highest volume of mileage per week, the rest of the team does not fall far behind him. Lokedi and Schroeder both run in the 70-mile range during a normal week. Whittlesey is pleased with the fact that the average of the women’s runners is anywhere from 60-65 miles and 75-80 on the men’s team at this point in the season.

Looking at an 80-mile per week average, the Kansas men would each be running 4,160 miles, which is enough to cover the distance from Lawrence, Kansas to Toronto, Canada (1,039 miles) four times in one calendar year. With the same perspective on the women’s side averaging 60 miles a week, that is enough to travel from Lawrence to Los Angeles, California in just six-and-a-half months.

Just like a car requires a new set of tires, cross country runners are due for new shoes after a certain number of miles. Compared to 40,000 miles on average for replacing tires on a vehicle, runners have to get a fresh set of shoes after 350 miles of running, meaning Melgares goes through nearly 15 pairs of shoes in a year.

“If you’re averaging 80 (miles), that’s 4,160 (miles per year). If you’re averaging 70, that’s 3,600; with 60, that’s 3,100,” Whittlesey said. “If they average that, they’re not going to average that all year, they’re going to go up and down depending on how the season is going, and sometimes they get a break. When they’re at their heaviest volume, this is what they’re averaging. The volume will start to lower when they’re getting closer to their championship.”

Training for championships is nothing new for Whittlesey. Before coming to Kansas, his previous years were spent coaching at North Carolina where he helped coach two historical women, Alice Schmidt and Shalane Flanagan. Both runners became NCAA Cross Country Champions during their time and went on to make the United States Olympic team. Flanagan coming home with the bronze from the 10,000 meters and Schmidt being a member of the team in both 2008 and 2012.

Entering his ninth season with the Kansas cross country and track and field teams, Whittlesey has helped coach five women to break school records along with leading the women’s cross country program to their first ever appearance at the NCAA Championships in 2015. The trend continued last season as Whittlesey helped coach Lokedi to produce the best performance in over 50 years by a KU runner at the NCAA Championships where she placed fifth. Whittlesey’s legacy continues on at KU through the effort and dedication he puts into this Kansas team.

Every Kansas runner’s training is unique, as each athlete is running to break their personal best, having various goals and journeys throughout their season. An individual process helps find the perfect mileage to benefit the runner and guide them toward success when it comes to competition.

To run the quantity of miles the individuals put in training requires a stable mentality and a vast amount of durability. It is expressed how crucial these elements both are in order to be successful on runners’ long-distance days which can amount anywhere from 14 to 20 miles.

“Once you have been running eight-mile runs every single day, they’re not as hard,” Schroeder said. “At first, eight miles seems so long, it’s like you’re running forever. Then you get used to it and it’s just perspective because then eight miles doesn’t seem as long. At that point, you’re doing 14 (miles) and then that’s your long (run). It’s definitely a mental game, it’s your new normal. One of the hardest parts is getting up so early every single morning. In Kansas it’s just so hot, you have to get up before the sun’s up and run right when the sun is rising.”

To the runners, this has become their new norm, but also it is also easy to see the contrast from what a life would be without the time, as well as training, that they put in to compete in cross country at the Division I level.

“I think the weirdest part is if I get up and go on a 14-mile run and I text my friend when I’m done, she doesn’t respond for two or three hours,” Schroeder said laughing. “She hasn’t even woken up yet and I have already woken up, ran and eaten breakfast.”

While mentality and mindset are crucial aspects of the sport, Schroeder also expresses how thankful she is to run alongside her Jayhawk teammates during practices and long runs. She explained how challenging it would be if this sport truly was not a team effort and a group in which to find support.

“The nice thing is if you are running a lot of miles, when you’re here, you’re with your team so you get to talk to people,” Schroeder said. “On a long run you’re not running hard, you’re pace running, you’re running easy, so you can carry on full conversations and that makes the time go by way faster.”

Not only do the Jayhawks put in a vast amount of miles each week to prepare for upcoming events, they put in additional hours in the weight room to build their strength for the endurance of the distances they are running.

“It doesn’t look like much, but apart from doing all of that mileage, we still have to work out and lift and it adds up too,” Lokedi said. “It helps you, and you build strength, but sometimes you lift a lot and you get tired – but you still have to work. You have to (find a) balance in between, but I think most of us have worked through it.”

The many miles have paid off for the Jayhawks. Lokedi was recently named the University of Kansas Women’s Athlete of the Year after having a 2016 season that will always be remembered. Along with securing fifth place at the NCAA Cross Country Championship to become the first two-time All-American in Kansas women’s cross country history, Lokedi became the first Kansas women’s runner to win the individual Big 12 Championship.

Melgares placed within the top two finishers for the Jayhawks in all four meets in 2016 in which he competed. Finishing with a time of 26:04.4 in the 8K landed him 17th place in the Big 12 Cross Country Championship last October.

Schroeder kicked off her 2017 season with a strong start placing second overall on the women’s side at the Bob Timmons Dual Classic with a 5K time of 18:04.6.

The 2017 season is one that is promising for this Kansas team, as they keep working towards being better with every mile they run.

The amount of time and dedication to accomplish the miles, training, and success add up each week requires a strong mindset. With the 2016 season behind them and the new season coming to full speed, Melgares, Schroeder and Lokedi look to their past accomplishments and a new start as ways to know that all their hard work has led to success.

“If you’re running 90-100 miles a week, you’re going have to run four to five days a week, twice a day,” said Melgares. “That mentaitly, getting your body going so many times, equates to about 15 runs a week sometimes. I think that’s the hardest part; just staying engaged sometimes. But having teammates to run with and talk to while also being able to go run different routes plays a big role as well.

“More than anything, it’s just getting up and running.”