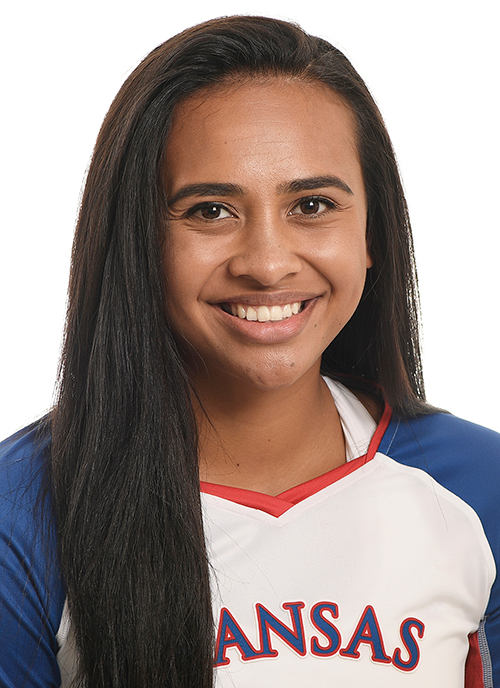 • Four-year starting setter for the Jayhawks … Closing on KU’s career assists record and ranks top-10 in career digs … Has led Kansas to a .300 team hitting percentage or greater in four matches this season … Leads the Big 12 in assists per set.
• Recorded 11 double-doubles in 13 nonconference matches, including six-straight to start the season.
• Named Big 12 Offensive Player of the Week and MVP of the Wolfpack Invitational and after opening the season with three double-doubles during KU’s trio of victories, averaging 12.31 assists per set and 4.15 digs per set.
• Opened the season with 54 assists and 22 digs in a four-set victory at NC State (Aug. 25).
• Posted 43 assists and 18 digs with two blocks in a four-set win over Missouri State (Aug. 26) … Became the fourth all-time Jayhawk to pass 4,000 career assists.
• Reached 60 assists for the second time in her career with a Big 12 season-high 63 in a five-set win at NC State (Aug. 26) … Became the 14th all-time Jayhawk to reach 1,000 career digs with 14 against the Wolfpack … Added three kills and three blocks.
• Opened the Wolverine Invitational with 39 assists, seven kills, 12 digs and two blocks in just three sets while leading KU to a .310 team hitting percentage against Utah Valley (Aug. 31).
• Posted 52 assists and 14 digs in a four-set victory over Long Beach State (Sept. 1).
• Recorded her sixth-straight double-double with 33 assists and 10 digs against Montana (Sept. 2).
• Guided Kansas to a .390 team hitting percentage during a three-set victory over No. 13 Kentucky (Sept. 4) behind an effort of 40 assists.
• Followed with another efficient performance against Belmont (Sept. 8) with 38 assists and 10 digs while leading Kansas to a .309 hitting percentage.
• Contributed 50 assists, 10 digs and two aces in KU’s four-set win over No. 17 Purdue (Sept. 8).
• Recorded 36 assists and 19 digs with two blocks against San Jose State (Sept. 15).
• Nearly recorded a triple-double with 50 assists, 16 digs and career-high nine kills in five sets at Santa Clara (Sept. 15).
• Posted 52 assists, 11 digs and six kills against Idaho (Sept. 16).

• Named Big 12 Setter of the Year for the second-straight season and earned AVCA All-America Third Team honors on the way to guiding Kansas to a 27-3 record and its first-ever Big 12 Conference title.
• Started in all of KU’s 30 matches … Recorded 16 assist-dig double-doubles … Recorded 50 or more assists in seven matches … Averaged 10.61 assists per set, 2.84 digs per set, 0.21 aces per set and 1.07 points per set.
• Ended the season with nine-straight assist-dig double-doubles.
• With 31 assists in three sets, guided KU’s offense to a season-high .356 hitting percentage against Lamar (Aug. 27) at the Bulldog Invitational.
• Served up a season high of three aces twice – against Chicago State (Sept. 2) against Texas Tech (Oct. 8).
• Recorded 43 assists with nine digs and an ace in a three-set win over Maryland (Sept. 2) … Her 43 assists were the second-most by a Big 12 player in a three-set match during the 2016 season.
• Notched her first double-double of the season with a season-high 59 assists and 19 digs in a five-set win over Arkansas (Sept. 3).
• Registered five kills, 43 assists and 10 digs to edge eventual NCAA Elite Eight participant Creighton (Sept. 8) in five sets on the road … Her all-out effort while successfully keeping a volley alive against the Bluejays resulted in a broken laptop screen on press row.
• Recorded a co-season high of five kills with 45 assists and nine digs during a four-set win over Baylor (Oct. 1).
• Assisted on 39 kills in a three-set victory over Texas Tech (Oct. 26), in which the Jayhawks recorded an efficient .343 hitting percentage – the highest for KU during conference play.
• Recorded 41 assists, 11 digs, three kills and two blocks in KU’s five-set win over No. 2 Texas (Oct. 29).
• Poured in 54 assists during KU’s five-set win at Kansas State (Nov. 2).
• Reached 50 assists in back-to-back four-set matches against Oklahoma (Nov. 5) and TCU (Nov. 12) … Notched 53 assists and 12 digs against the Sooners and 50 assists, 17 digs and a season-high five blocks against the Horned Frogs.
• Helped Kansas clinch at least a share of its first-ever conference title with 50 assists and a season-high 20 digs against Iowa State (Nov. 19).
• Concluded the regular season with 53 assists, 13 digs and three blocks at Baylor (Nov. 26).
• Posted 14 digs in just three sets against Samford (Dec. 1) in the first round of the NCAA Tournament.
• Recorded 53 assists, 18 digs and four blocks against No. 21 Creighton (Dec. 2) in the second round of the NCAA Tournament.

• One of the keystones to an unprecedented season, helping guide Kansas to a 30-3 record, No. 4 ranking, and first-ever appearance in the NCAA Championship semifinals.
• Led the Big 12 in assists per set (12.1) and total assists (1,371) for the second-straight season; ranked third nationally in assists per set … Her steady hands guided a Kansas offense that ranked fourth in the country in hitting percentage (program-best .299), and second in the country in kills per set (15.1); led the Big 12 in kills per set and ranked second in hitting percentage … Led Kansas in total aces (31) for the second-straight season.
• Became the second Jayhawk to be named Big 12 Setter of the Year (Erin McNorton) … First Jayhawk, with Kelsie Payne, to be a member of the AVCA All-America First Team … All-Big 12 First Team … AVCA All-Midwest Region First Team … AVCA National Player of the Week (Oct. 13) … Two-time Big 12 Offensive Player of the Week.
• Posted a team-high 13 double-doubles … 24 matches with 35 or more assists … Four matches with 15 or more digs … Averaged at least 14.0 assists per set in six matches.
• Recorded 44 assists in just three sets against UMKC (Sept. 5).
• Paced KU’s offense to a .353 hitting percentage with 46 assists in only three sets against Marquette (Sept. 12).
• Named Big 12 Offensive Player of the Week after guiding KU to a .396 team hitting percentage with 12.7 assists per set in wins over South Dakota State (Sept. 18), Gonzaga (Sept. 18) and Missouri State (Sept. 19) … Recorded 51 assists against Gonzaga.
• Named Sport Imports/AVCA National Player of the Week and Big 12 Offensive Player of the Week for leading KU’s offense to a .326 hitting percentage in sweeps over Texas Tech (Oct. 7) and Iowa State (Oct. 10), averaging a Big 12-leading 12.3 assists per set, totaling four aces, and registering six kills on 14 errorless swings.
• Recorded a season-high 57 assists at Oklahoma (Nov. 7) during KU’s four-set victory.
• Posted 44 assists and 15 digs in only three sets against TCU (Nov. 14).
• Set a season high in kills (seven) on a .583 attacking clip with 47 assists and 20 digs at Kansas State (Nov. 25).
• Fueled KU’s NCAA Championship second-round sweep over Missouri (Dec. 4) with a double-double of 40 assists and 12 digs.
• Earned NCAA Championship San Diego Regional MVP honors while guiding the Jayhawks to their first appearance in a regional final and a national semifinal with wins over Loyola Marymount and No. 1-seed USC … Assisted 49 kills against LMU (Dec. 11) for a .296 team hitting percentage … In addition to 48 assists against No. 1 USC, Havili snuck in four kills on seven errorless swings, and a season-high 22 digs.
• Recorded eight kills, eight digs, and 38 assists for a near triple-double in the NCAA Championship semifinals against Nebraska (Dec. 17).

• Started every match and appeared in every set during her freshman campaign.
• Shattered the Kansas all-time freshman assist record by racking up 1,332 on the season … Recorded 14 double-doubles on the year, tied for 10th-most during a single season … Eclipsed 40 assists 19 times and 50 assists nine times.
• Big 12 leader in assists (1,332) and in assists per set (11.29).
• Began her Jayhawk career posting a line of 28 assists, eight digs, two kills and an ace in a three-set win over Utah Valley (Aug. 29).
• Followed suit with her first KU double-double (40 assists/17 digs) and delivered two service aces later that day against Lipscomb (Aug. 29).
• Eclipsed the 50-assist mark for her first time (55) in the championship match of the Pioneer Classic, against host Denver (Sept. 6).
• Connected on five service aces during the Jayhawks’ second match of the Villanova Invitational, a four-set victory over American (Sept. 13).
• Set a season-high 56 assists to help KU take down Baylor (Oct. 10).
• Logged back-to-back matches with 45 assists/11 digs/three blocks with a sweep of TCU (Oct. 18) and a five-set loss to Iowa State (Oct. 22).
• Recorded season highs of 57 assists and 19 digs in a five-set defeat by TCU (Nov. 1).
• Eclipsed the 50-assist mark (51) in a four-set win over Iowa State (Nov. 19).
• Tallied another 50-assist performance (53), paired with nine digs, four blocks and an ace in a five-set victory over Oklahoma (Nov. 29).
• Commanded the offensive attack in the first round of the NCAA Championship, dropping a line of 54 assists and two aces, while picking up 13 digs in a five-set battle with Little Rock (Dec. 5).

• Four-year letterwinner at Haltom High School under head coach Jennifer Finnell.
• One of 12 volleyball players in the country to be selected to play on the U.S Women’s Junior National Team that competed in Guatemala from July 6-14, 2014.
• Texas Girls Coaches Association First Team All-State and Academic All-State (5A) following her senior year.
• Honored as the district 4-5A University Interscholastic League (UIL) Girls Volleyball Setter MVP in 2013.
• Voted team MVP all four years of her high school career, as well as four-straight years as a first-team all-district honoree.
• Started her career with winning the 2010 UIL Newcomer of the Year award.
• An academic all-district honoree for the last three seasons of her high school career … Played basketball for two years.

• Played for the 17U Texas Advantage Volleyball (TAV) Club, leading the team to the 2013 National Championship, earning Tournament MVP honors in the process under the direction of club coach Ping Cao.
• Also played for Texas Image for five years.

• Majoring in sport management in the School of Education at The University of Kansas.

• Daughter of Mele and Moses Havili.