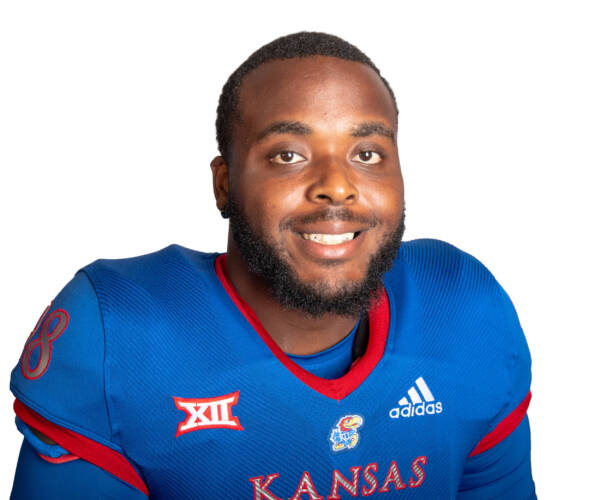 2019 (So.): Played in all 12 of KU’s games, earning starting nods in the final six contests of the year … Registered 12 total tackles (eight solo, four assisted) on the season … Recorded 2.0 TFLs for a loss of 18 yards; both of which were also credited as sacks … In addition, broke up three passes throughout the year. Saw playing time in each of the first two games of the season (Indiana State and Coastal Carolina) but did not record any statistics … at Boston College: Made two tackles for the Jayhawks, a new career high in his first season at Kansas … West Virginia: Made his first sack (and tackle-for-loss) as a Jayhawk, good for a WVU loss of seven yards … Tallied one solo tackle on the day … at TCU: His 1.0 sack resulted in an 11-yard loss for the Horned Frogs … His sack and TFL totals (1.0 each) tied his KU career bests … Also made one solo tackle on the day … Oklahoma: Saw playing time against the nationally ranked Sooners, but did not record any statistics on the afternoon … at Texas: In the starting lineup at defensive tackle for the first time in his Kansas career … Tallied four total tackles against the Longhorns (three solo, one assisted), also a new KU-career best … Broke up one Texas pass on the night, again marking another season and KU-career best in Austin … Texas Tech: Started for the second-consecutive game in KU’s Homecoming win over the Red Raiders … Kansas State: Logged one solo tackle in the annual Dillons Sunflower Showdown … at Oklahoma State: Made his fourth-straight start on defense for KU in Stillwater, again making a single solo tackle on the day … at Iowa State: In the starting lineup at defensive tackle for the Jayhawks in his fifth-consecutive game … Tied his season and KU-career high with one Cyclone pass breakup … Also assisted on one tackle in Ames ... Baylor: Made his sixth start of the season for KU at defensive end, while playing in all 12 games … Had one solo stop in the contest against the nationally ranked Bears.

High School: Earned a three-star rating from 247Sports.com … Played under head coach Anthony Agresta at Northlake Christian HS … Had 31 tackles in the trenches for the Wolverines as a senior in 2016, including 2.5 quarterback sacks on the season … As a junior, turned in similar numbers, amassing 30 stops and 2.5 sacks, with one interception.

To say Caleb Sampson’s college journey has been a full of adversity would be an understatement. Originally signed and playing for Missouri coming out of high school, Sampson would eventually land at a junior college in Mississippi, a challenge that would leave him in tears

I didn’t come from a whole lot. Growing up I always had what I needed but sometimes couldn’t get the things I wanted. Looking back, though, I’ve always seemed to have plenty of one thing: mentorship.