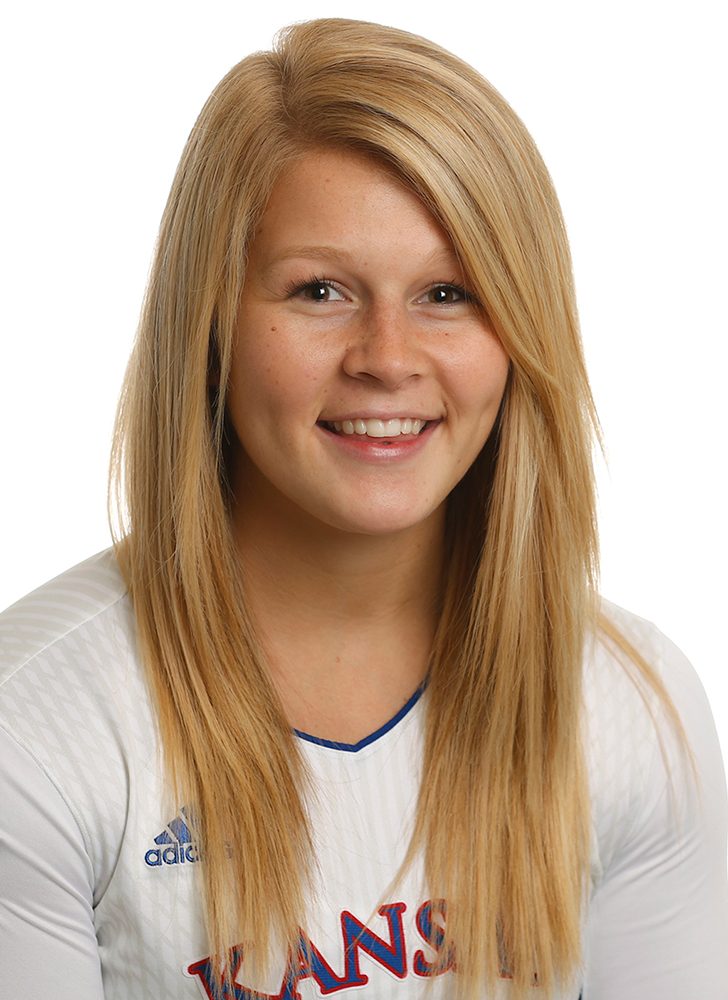 2015 (JUNIOR)
• Started in all 33 matches as the primary libero, helping lead Kansas to an unprecedented 30-3 record, No. 4 ranking, and first-ever appearance in the NCAA Championship semifinals.
• Totaled the second-most digs by a Jayhawk in a season (587) and set a KU single-season record of 5.19 digs per set … Ranked 20th in the nation and second in the Big 12 in digs per set … Ranked 30th in the nation and second in the Big 12 in total digs.
• Averaged a .982 reception percentage – only 11 reception errors in 614 attempts … Recorded a career-high 119 total assists … Served up 18 total aces, tying a season-high two aces in four matches.
• Recorded 20 or more digs in 12 matches, including her first 30-dig match.
• Recorded 20 digs at Arkansas (Aug. 29), in helping the Jayhawks to a four-set win and clinching the Arkansas Invitational title.
• Posted 23 digs in just three sets against UMKC (Sept. 5), lifting KU to a 6-0 start and earning Kansas Invitational MVP honors.
• Recorded 25 digs in a four-set victory over Gonzaga (Sept. 18), which set the team mark for the best start in program history (11-0).
• Posted 27 digs to open Big 12 play during a four-set victory over Kansas State (Sept. 23).
• Recorded 23 digs in a three-set victory over Oklahoma (Oct. 21).
• Set a season-high 10 assists with 21 digs against TCU (Nov. 14).
• Recorded the second-most digs by a Jayhawk in a four-set match with a career-high 36 digs at Kansas State (Nov. 25) … Her career digs night tied for eighth among all NCAA Division I players for digs in a four-set match during the 2015 season … KU recorded 110 total digs that night, which set a program record during the rally-scoring era (since 2001), and ranked second in NCAA Division I for digs in a four-set match.
• Posted 23 digs in a three-set sweep over Texas Tech (Nov. 28) to conclude the regular season.
• Averaged 5.74 digs per set during five matches in the NCAA Championship.
• Helped defeat No. 1 USC (Dec. 12) with 28 digs and five assists in five sets … Served during a 6-0 run in the fifth set that completed the upset of the Trojans … Served an ace to tie the fifth set for the first time, 13-13, after trailing 13-9 … The win gave Kansas its first ever appearance in the NCAA Championship semifinals … Wait was named to the NCAA Championship San Diego Regional All-Tournament Team.
• Recorded 23 digs against Nebraska (Dec. 17) in the NCAA Championship semifinals.

2014 (SOPHOMORE)
• Started every match and appeared in every set over her sophomore season at the libero position.
• Eclipsed 20 digs in 14 matches, including a new career-high (27) on three separate occasions… Cranked out 20 digs in five-consecutive matches.
• Ended the season with 561 digs, what was then the second-most a Jayhawk has recorded in a single season … Her 561 digs ranked second in the Big 12, while her 4.75 dig average ranked third.
• Set a season best in digs (27) at home against No. 23 Creighton (Aug. 30) … Matched that total one week later in a road win at Denver (Sept. 6).
• Earned Tournament MVP honors at the Jayhawk Classic (Sept. 19-20).
• Dug out 26 attacks by No. 2 Texas (Oct. 5) in a four-set home loss.
• Served up two aces and eclipsed the 20-dig mark in a home sweep over TCU (Oct. 18).
• Racked up 22 digs and a duo of aces in a four-set win over Iowa State (Nov. 19).
• Led the floor and tied her season best in digs (27) and served an ace in the NCAA Championship opening round match against Little Rock (Dec. 5).

2013 (FRESHMAN)
• Saw time in all 33 matches, including three starts, as a defensive specialist for the Jayhawks.
• A key contributor on both sides of the net, Wait finished the season with 229 digs and 12 service aces … Had 10 or more digs in eight matches, including four of KU’s last five matches … Tied a Kansas postseason record with four total service aces in the NCAA Championship match.
• Recorded her first career service ace and had eight digs in KU’s victory over Morgan State (Aug. 31).
• Recorded 11 digs to help the Jayhawks win on the road at Arizona (Aug. 31).
• Posted her first career kill to go along with two assists in a 3-1 victory at UMKC (Sept. 3).
• Had 10 digs in her first career start as KU won in five sets at No. 25 Wisconsin (Sept. 13).
• Recorded another then season-high 13 digs to help KU defeat Notre Dame (Sept. 22).
• Dug out 10 Baylor attacks during KU’s 3-1 victory in Waco, Texas (Oct. 5).
• Tied a then Kansas postseason record with a season-high three service aces against Wichita State (Dec. 6) in the first round of the NCAA Championship.
• Led the team with 19 digs in KU’s 3-1 victory over Creighton (Dec. 7) in the second round of the NCAA Championship, advancing the Jayhawks to their first ever NCAA Championship regional appearance.

HIGH SCHOOL
• Highly-touted recruit out of Gardner Edgerton High School in Gardner, Kansas … Coached by her father, Darrell Wait.
• Named the Kansas City Star 2013 Female Scholar-Athlete of the Year, the 2013 6A Player of the Year, Under Armour Girls High School All-America First Team and the 2013 Kansas Gatorade Volleyball Player of the Year.
• The American Volleyball Coaches Association (AVCA) named Wait one of 100 players selected for HS All-America honors, which represent 32 states and 89 high schools … With that honor, Wait was invited to play in the Under Armour All-America Volleyball Match and Skills Competition.
• Played as an outside hitter in high school, racking up an astounding 1,750 kills and 1,635 digs for her career.
• Four-time all-conference (once Frontier League, three times Eastern Kansas League), two-time all-state first team, two-time all-metro first team and was named to the Mizuno Honorable Mention Team.
• Aside from volleyball, Wait was also twice named to the all-metro team for track and was a two-time EKL Honorable Mention basketball honoree.
• Named co-valedictorian at Gardner Edgerton and gradated in the top-one percent of her class … A Kansas Honors Scholar.

ACADEMICS
• Graduated in May 2016 with a bachelor’s degree in finance from the School of Business at The University of Kansas in just three years.
• Begins her first semester at KU’s School of Law in the fall of 2016.

PERSONAL
• Born Cassandra Rose Wait in Merriam, Kansas.
• Daughter of Darrell and Linda Wait … Has an older brother, Kyle, and a younger sister, Kendra.
• Father, Darrell, was a high jumper on the Kansas State track & field team … Brother, Kyle, was a pole vaulter on the Kansas State track & field team.
• She is the first member of her family to attend The University of Kansas.