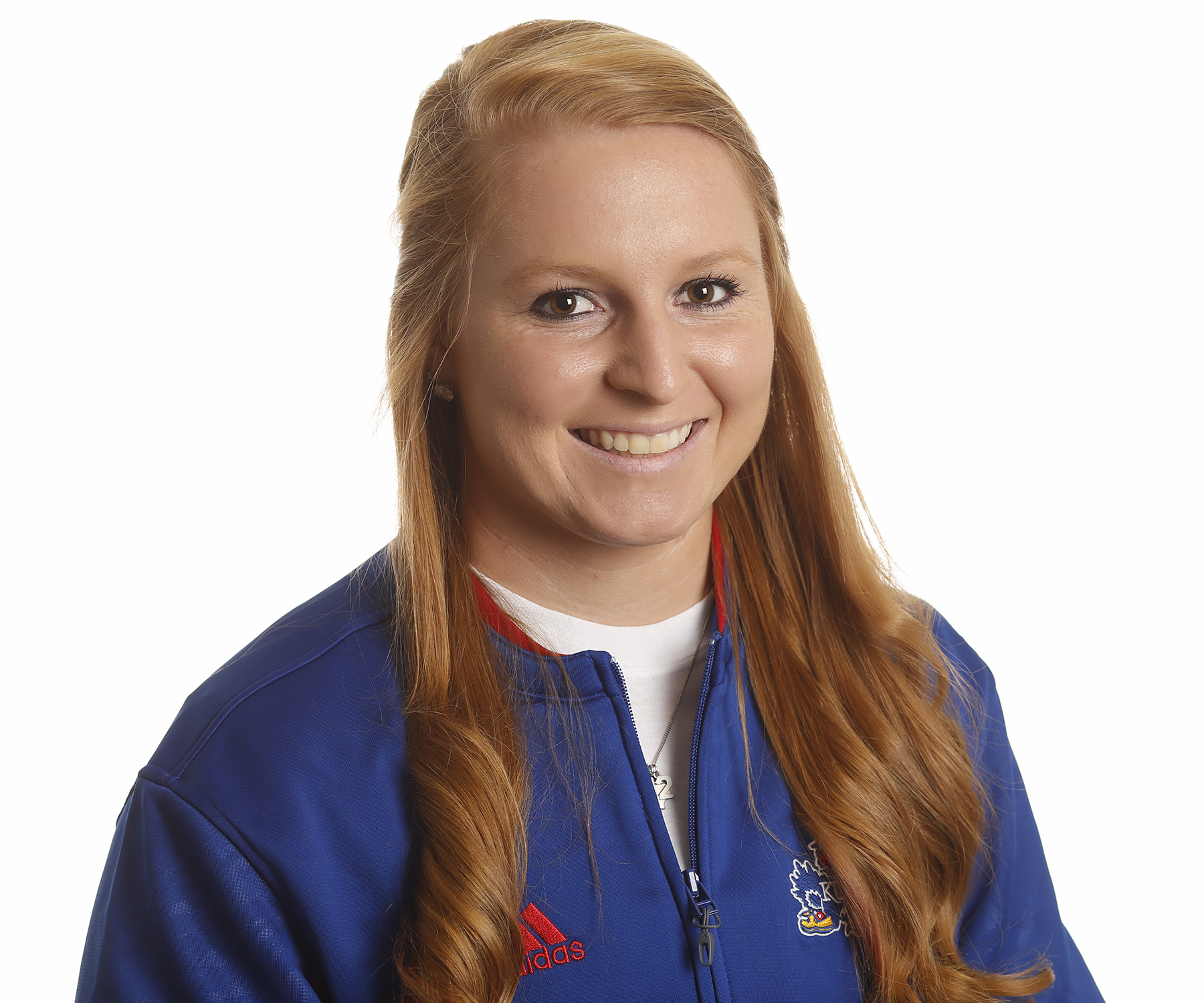 2016 (Senior)
Named National Fastpitch Coaches Association (NFCA) Midwest All-Region First Team… Earned All-Big 12 First Team honors… Selected by the Pennsylvania Rebellion as the 16th selection of the 2016 National Professional Fastpitch draft… Started all 51 games at shortstop and led the Jayhawks in eight offensive statistical categories… Claimed KU’s all-time walk, RBI, runs scored and slugging percentage records… Hit a team-best .387 at the plate as a senior… Also led Kansas in hits (55), runs scored (48), doubles (18), home runs (10), walks (41) and slugging percentage (.725)… Tallied 100 assists and 86 putouts while only committing four errors for a .979 fielding percentage… Drew 41 base on balls, which is the second-most in a single season by a Jayhawk, one behind her mark of 42 set in 2014… Recorded 18 doubles, tying for the most by a senior in a single season.

2015 (Junior)
Named National Fastpitch Coaches Association (NFCA) Midwest All-Region Third Team… Earned All-Big 12 First Team and All-Big 12 Defensive Team honors… Selected Big 12 Player of the Week for the week of March 8… Started all 55 games at shortstop… Helped Kansas to its first 40-win season since 1992, fifth-straight 30-win season and second-consecutive NCAA Tournament appearance… Led the squad with a .386 batting average… Ranked first on Kansas’ roster in hits (68), runs scored (52) and slugging percentage (.688)… Second on the team in home runs (13), RBIs (56), walks (38) and on-base percentage (.488)… Registered 14 doubles… Tallied 93 assists… Ended the season with longest active reached-base streak (23) and posted the second-longest hitting streak (11)… Led the squad with 19 multi-hit efforts and second-most multi-RBI performances with 15… Tallied three or more RBIs on eight occasions and three or more hits in six contests… Just five walks away from claiming KU’s all-time base on balls record, became the third Jayhawk to record 100 or more career walks… Has the third-highest career batting average (.354), fifth-most career RBIs (121) and second-highest career slugging percentage (.620) in KU softball history… Collected two or more walks during six games, including a career-best four walks against Texas Tech (4/11)… Hit a pair of home runs with three RBIs in a win at Oklahoma State (4/3)… Hit a grand slam against Weber State (2/14)… Recorded three games with four RBIs, including a 3-for-5 performance against Liberty (2/20) and a 2-for-4 effort against Illinois State (2/22)… Went 3-for-4 on the road at Texas Tech, while also tallying three RBIs.

2014 (Sophomore)
Named Fastpitch Coaches Association (NFCA) All-Region First Team (Midwest Region), as well as All-Big 12 Second Team… Co-Big 12 Player of the Week (3/11)… Started all 57 contests for the Jayhawks at shortstop… Drew 42 walks, setting a new Kansas single-season record, surpassing the previous record of 36… Hit a team-best .365 and also led the squad in home runs (12), RBIs (41), runs scored (43), walks (42) and total bases (104)… Set a new record for home runs in a season by a sophomore… Recorded the sixth-highest single-season slugging percentage (.654)… Recorded the highest on-base percentage (.502), while reaching base in 21-consecutive games, the longest on-base streak of the season… Posted an 11-game hitting streak, the second-longest hitting streak in 2014… Recorded 13 multi-hit games and a team-high 11 multi-RBI games… Collected two or more walks in a single game seven times… After two seasons was second all-time in slugging percentage (.654)… Recorded first home of the season, a solo shot, after going 2-for-3 at the plate with two RBIs against SIU Edwardsville (2/21)… Registered a season-best three RBIs and a home run at South Florida (3/7)… Hit a home run in three-consecutive games from March 7-8… Drove in a run on only hit of the game against Saint Francis (3/22)… Was 3-for-4 with 10th home run and three RBIs against Texas Tech (4/18)… Hit 12th home run in a postseason win against Missouri (5/17).

2013 (Freshman)
Named All-Big 12 Second Team after graduating a year early from Haltom High School… The Jayhawks’ starting shortstop for all but two games (due to injury)… Churned out 12 doubles, tying her for second-most by a KU freshman… Hit even better in Big 12 play (.318) than she did overall (.297)… Led the team with 25 walks for a .409 on-base percentage, which leads all players returning for the 2014 season… Recorded three RBIs and scored a run after hitting a bases-clearing double in the first game against Georgetown (2/9)… Went 2-for-4 with a double and a run scored in the first game against Auburn (2/16)… Recorded her fourth RBI after going 2-for-3 with a double and a run scored against Bryant University (2/17)… Hit two doubles and scored two runs in the second game against Auburn (2/22)… Batted in her fifth run with a hit against Lafayette College (3/2)… Went 2-for-4, including her sixth double, in the third game against North Carolina State (3/2)… Knocked in her sixth RBI, scored a run and recorded her only stolen base of the season, against Stony Brook (3/1)… Added three RBIs to her total after a career-high three hits, including a double, against Eastern Michigan (3/8)… Brought her RBI total to 11 with her eighth double of the season against Louisiana Monroe (3/10)… Hit two doubles and recorded her 12th RBI of the season against Texas State (3/16)… Recorded her first home run of the season on a solo shot in the second game at Texas Tech (4/6)… Missed the only starts of her freshman season due to a bad-hop, black eye during the Furman doubleheader (4/13)… Went 2-for-2 with two RBIs, a double and a run scored when she returned for the series finale at Furman (4/14)… Knocked in her 16th RBI and scored a run in the second game at Oklahoma State (4/20)… Added another RBI in the third game of the series against the Cowgirls (4/21)… Recorded her 18th RBI of the season in the first game of a doubleheader with UMKC (4/24)… Hit her second and third home runs of the season during a doubleheader with No. 14 Baylor (4/27) to bring her RBI total to 19… Went 2-for-3 with an RBI, a run scored and a double in the first game of a doubleheader against No. 1 Oklahoma (5/5)… Hit a three-run home run and tied a career high with three RBIs in the season finale against Iowa State (5/12) to bring her RBI total to 24.

High School
Played three years and graduated early from Haltom High School in Haltom City, Texas… Played under coach Allison Conaway… Named the Preseason Big 12 Freshman of the Year by CollegeSportsMadness.com… Ranked No. 22 on the ESPN Softball 2012 Recruiting Class after cranking out a .643 batting average and 40 RBIs, while striking out just once in her final campaign with the Buffaloes… As a freshman was awarded All-District, District Defensive Player of the Year, Golden Glove Award, Haltom High School MVP and Academic All-District… As a sophomore was All-District, Academic All-District, won the Silver Bat Award, District MVP and was 2011 All-VYPE MVP… As a junior, she was named to the Star-Telegram Super Team, All-VYPE team, was team MVP, Academic All-District and District 6 5A MVP… Top 10% of class her freshman and sophomore years.