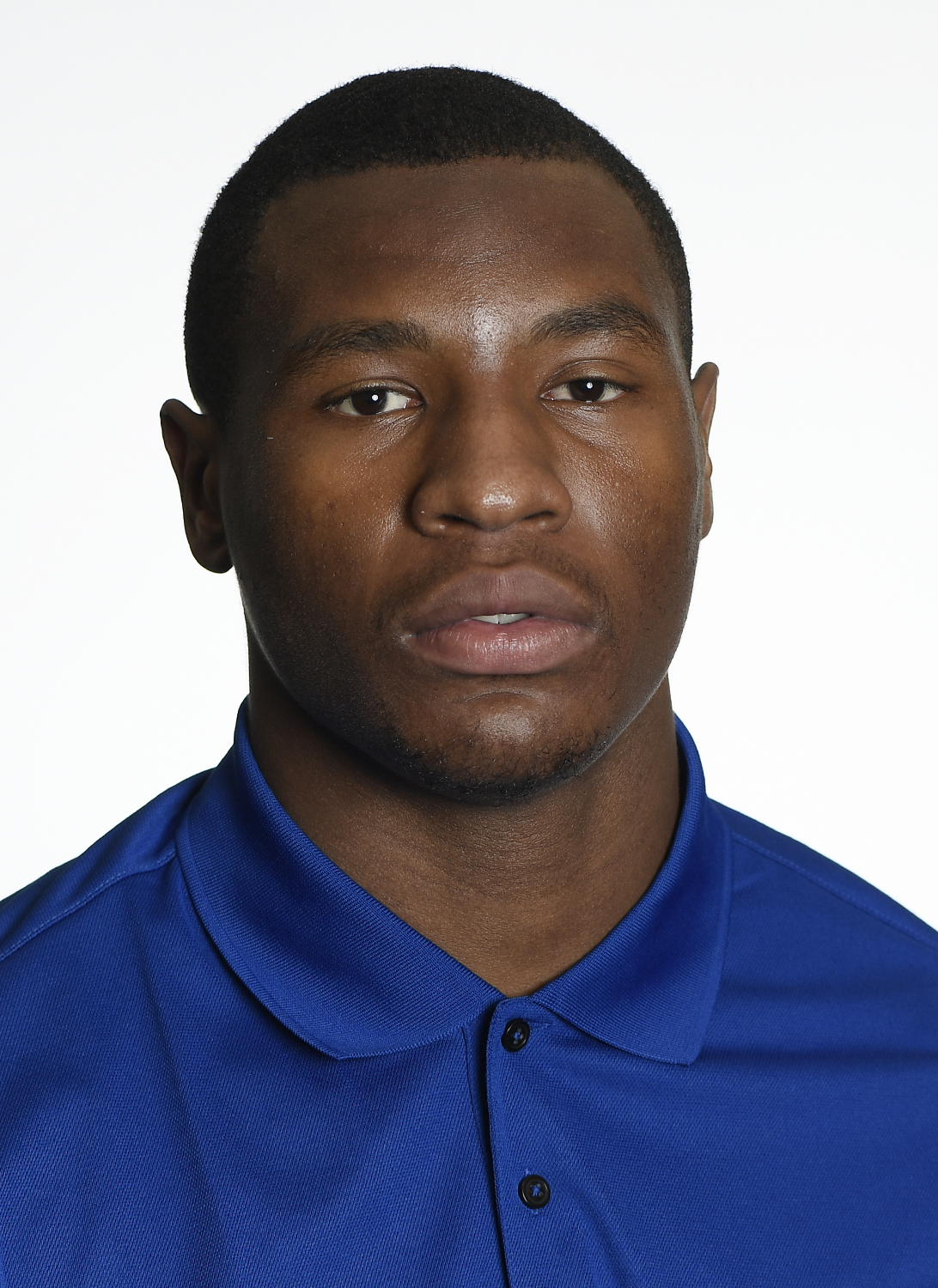 2017 (Jr.): Kansas football’s first-ever Preseason Big 12 Defensive Player of the Year and unanimous All-Big 12 First Team honoree … Found his name on multiple preseason watch lists including, Bednarik and Nagurski Awards … Picked up Second Team All-Big 12 honors from the league coaches and the Associated Press … Started all 12 games … Ranked third on the team with 63 total tackles … Finished his junior season with 9.0 tackles-for-loss and 1.5 sacks … Also had seven quarterback hurries, four pass breakups, three forced fumbles and one fumble recovery … His three forced fumbles tied for second among Big 12 players and ranked 31st nationally … SEMO: Had three tackles, 0.5 TFL and three quarterback hurries in the season-opener … Central Michigan: Recorded seven tackles, including five solo hits, and 1.5 TFLs … at Ohio: Tied his season high with nine total tackles, and 2.0 TFLs … West Virginia: Had three tackles. two QBHs and one pass breakup against the Mountaineers … Texas Tech: Posted a season-high-tying nine tackles, 1.5 TFLs, 1.0 sack, one forced fumble and one fumble recovery … at Iowa State: Had four tackles, 0.5 TFL, one QBH and two pass breakups … at TCU: Turned in eight tackles, 1.0 TFL and one forced fumble … K-State: Recorded one stop and one forced fumble against the Wildcats … Baylor: Tallied three total tackles … at Texas: Contributed six tackles and a pass breakup against the Longhorns … Oklahoma: Had six tackles, 1.0 TFL, 0.5 sack and one QBH … at Oklahoma State: Turned in four tackles before leaving the game with an injury.

2016 (So.): A consensus selection to the Big 12 Conference’s First Team football honorees after tallying 10.0 sacks on the season … Registered the most sacks by a Jayhawk since 2008 … The last time a Kansas player totaled more sacks in a single season was in 2001 … Completed the season tied for third on KU’s single-season sack list … Listed second in the Big 12 Conference and 18th nationally with 10.0 sacks … Notched 20.0 tackles in the opponent backfield, the most since 2002 … Ranks fifth on KU’s single-season tackle-for-loss list … Had the fifth-best TFL total in the FBS … Listed fifth on KU’s tackle leaderboard in 2016 with 56 stops, the most of any defensive lineman, 20.0 tackles for loss, 10.0 sacks, five quarterback hurries, three forced fumbles and two fumbles recovered … Boasted a career-high 11 tackles, 3.0 TFLs, 2.0 sacks a forced fumble and a fumble recovery in the win over Texas … Notched 2.0 sacks on three separate occasions at Memphis, at Texas Tech and against Texas … Boasted at least one sack in six-straight games … Had a sack in 7-of-12 games … Recorded a personal-best 3.0 tackles-for-loss in three games: at Memphis, against Texas and at K-State … Rhode Island: Began his sophomore season with a start at defensive end and made two tackles, one behind the line-of-scrimmage, and recovered a fumble in the win over Rhode Island … Ohio: Started his seventh-straight game and contributed one stop against the Bobcats … at Memphis: Sacked the Tigers’ quarterback a career-high-tying two times and notched a career-best three stops behind the line-of-scrimmage … at Texas Tech: Tallied a career-high-tying 2.0 sacks for the second-straight week and posted three stops overall before leaving the contest early due to injury … TCU: Posted a sack in his third-straight contest, while coming away with five stops, a forced fumble and two quarterback hurries … at Baylor: Recorded a sack in his fourth-straight game, while coming away with four tackles overall against the Bears … Oklahoma State: Contributed his fifth-consecutive game with a sack after a four-tackle, 2.0-tackle-for-loss performance against the Cowboys … at Oklahoma: Registered his sixth-straight game with a sack and completed the contest with a career-high-tying six stops against the Sooners … at West Virginia: Posted seven total tackles and also wrapped up 2.0 tackles in the Mountaineer backfield … Iowa State: Corralled four tackles against the Cyclones … Texas: Tallied a career-high 11 tackles – 3.0 of which were in the Longhorn backfield – a forced fumble, fumble recovery and 2.0 sacks on his way to being the Big 12 Conference’s Defensive Player of the Week after the victory … at K-State: Boasted six tackles and made 3.0 tackles in the Wildcat backfield.

2015 (Fr.): Saw action in all 12 games, starting five-straight contests to end the year against Oklahoma, Texas, TCU, West Virginia and K-State … Totaled 23 tackles, five tackles-for-loss, a team second-best 3.5 sacks, as well as a team runner-up four pass breakups, in his first season at Kansas … Recorded a career-best six stops against Oklahoma … Notched two sacks against the Sooners … South Dakota State: Provided a sack for a loss of five yards in his debut snap at Kansas … Baylor: Recorded the second tackle of his career … Texas Tech: Credited with three tackles, while also assisting on a sack and hurrying the quarterback … at Oklahoma State: Followed his career day against Texas Tech with four tackles against the Cowboys … Oklahoma: Started his first-career game and posted a season-high six tackles – including a season-best 2.0 sacks … at Texas: Garnered three tackles, 1.5 of which were for a loss, and disrupted a career-best three passes … at TCU: Posted three tackles … West Virginia: Made one tackle … K-State: Assisted on a tackle and disrupted a pass.