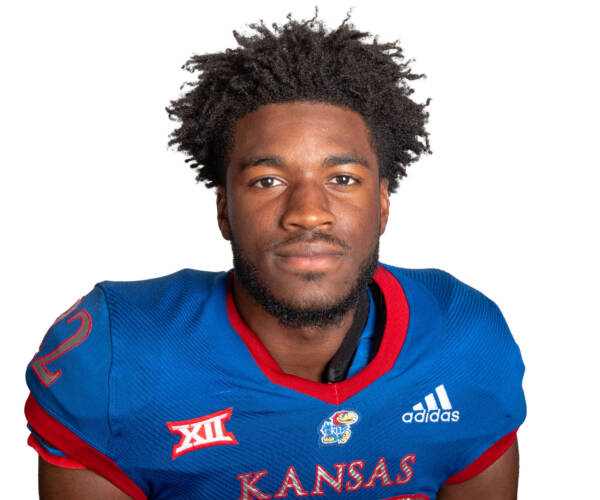 2020 (Fr.): The cornerback saw playing time on defense for the Jayhawks in each of the season’s nine games … Tallied 11 tackles on the season (five solo and six assisted) … Broke up three opponents’ passes and recovered two fumbles. Coastal Carolina: Made his first-career appearance for Kansas in the season opener … at Baylor: Broke up a pass against the Bears for his first-career stats as a Jayhawk … Oklahoma State: Registered the first tackles of his KU career against OSU, totaling three (one solo, two assisted) … at West Virginia: Recovered a fumble, broke up a pass and made three tackles (one solo, two assisted) for the second-straight game against the Mountaineers … at Kansas State: Credited with a fumble recovery in the Dillons Sunflower Showdown, his second in as many games … Also made a solo tackle against the Wildcats … Iowa State: Assisted on two tackles against the Cyclones …  at Oklahoma: Has played in each of KU’s seven games this season … Did not records any stats against the Sooners … TCU: Broke up a pass against the Horned Frogs … Has played in each of KU’s eight games so far this year … at Texas Tech: Added two solo tackles to his season stats, having accumulated 11 total tackles (five solo, six assisted) … Saw playing time in all nine of the Jayhawks’ games this season.

High School: Rated a three star prospect by Rivals, 247 Sports and ESPN … The No. 6-rated player in the state of Oklahoma, according to Rivals … The No. 2-ranked cornerback in the state of Oklahoma, according to Max Preps … Played for Bill Blankenship at Owasso HS, where he helped lead the Rams to a 13-0 record in 2019, including winning the Oklahoma 6A-1 State Championship … Recorded 25 tackles, eight pass breakups, one interception and one sack as a senior … Finished his high school career with 13 total interceptions … Captured two state titles during his last three seasons at Owasso HS … Also lettered in track & field, where he earned the Fastest Sprinter Award for OHS.