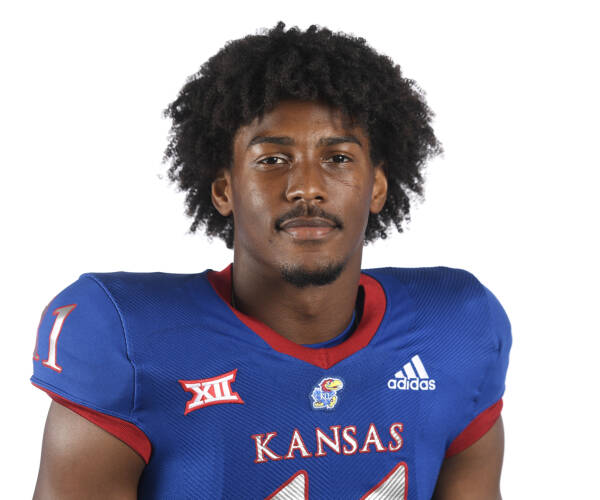 2020 (Sr.): Academic All-Big 12 Football First Team … Played in six of KU’s nine games on the season, earning starts in three … Hauled in five receptions throughout those six games for a total of 66 yards, which was good for a 13.2 yards per catch average … His long reception (26 yards) of the year came against TCU. Oklahoma State: Made his debut as a Jayhawk against the Cowboys but did not record any stats … at Kansas State: Made his first-career start at KU in the Dillons Sunflower Showdown … Recorded his first stats of the season with a 12-yard catch in the second quarter … He finished the game with four catches for 40 yards … Iowa State: Started for the second-consecutive game at wide receiver for the Jayhawks … Did not record any stats on the afternoon … at Oklahoma: Saw playing time in Norman without recording any stats …. TCU: In his fifth appearance of the season, caught one pass for 26 yards against the Horned Frogs … at Texas Tech: Did not record any statistics while playing in his sixth game of the season for KU.

Iowa Central CC (2018): Rated a three-star prospect by Rivals.com … Caught 19 passes for 292 yards and a touchdown … Had six catches for a season-high 112 yards and a score against College of DuPage … Played for head coach Jesse Montalto at ICCC.

Kennesaw State (2016-17): Appeared in all 14 games for the Owls in 2017, making his first career start on the road against No. 3 Jacksonville State in the second round of the FCS Playoffs … Finished the season with two receptions for 26 yards … Had a career-long 20-yard reception against Texas Southern … Sat out the 2016 season as a redshirt.

High School: Prepped at North Atlanta High School in Atlanta … Earned first team 5A All-Region after totaling 37 catches for 785 yards with five touchdowns … Recorded a career-best seven catches for 250 yards and two scores against Cambridge HS … Named the 2016 Coca-Cola Scholar Athlete of the Year … Played under head coach Jeremy Gainer … Named the Warriors’ Offensive Most Valuable Player … Also lettered in basketball … Helped lead NAHS to the 2015 Region 7 basketball title and a runner up finish in 2016.

Personal: Son of Beautii Joseph and Ezra Naylor … Plans to major in business marketing … Chose Kansas over offers from Bowling Green and Troy.