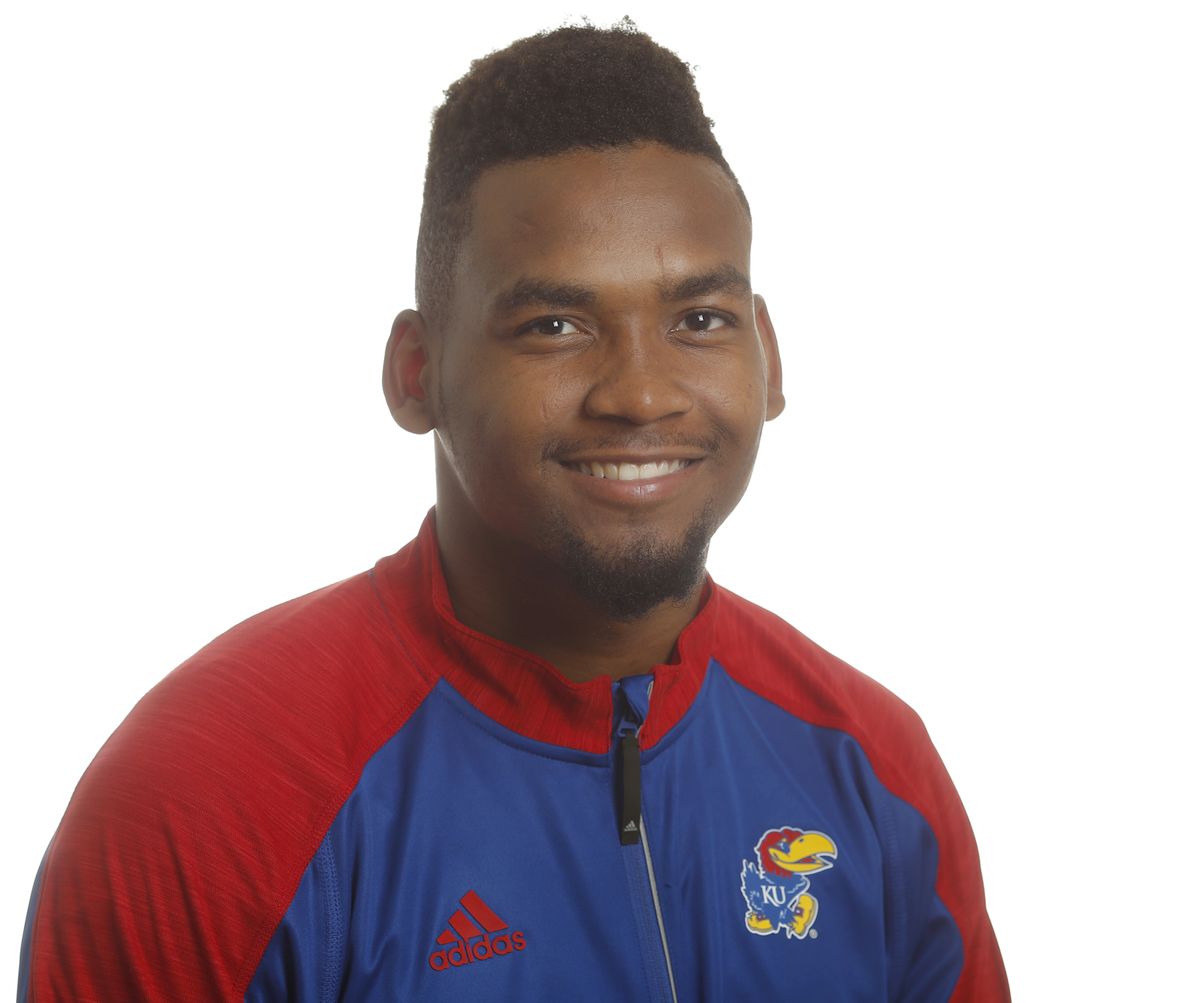 2016 (Sr.): Started at safety in all 12 contests… Led the Jayhawks in tackles for the second-straight season with 93… Totaled 70 solo tackles… Ranked sixth in the Big 12 Conference in both tackles and interceptions… Produced 2.5 TFLs… Collected a team-best four interceptions… Made 80 of his tackles in Big 12 play… Made a career-high 16 tackles against Oklahoma State… Rhode Island: Started at safety, making four stops in KU’s victory… Had his six-game double-digit tackling streak come to an end… Ohio: Wrapped up five tackles and picked off a pass in the end zone against the Bobcats… at Memphis: Tallied four stops… at Texas Tech: Rounded up five tackles, assisted on one for loss, and high-pointed his second interception of the season… TCU: Tallied a season-high six tackles and broke up a pass… at Baylor: Recorded a team-high eight tackles and forced a fumble against the Bears… Oklahoma State: Stuffed the stat sheet by accruing a career-best 16 tackles, the first sack of his career which resulted in him forcing a fumble and recovering the loose ball against the Cowboys… at Oklahoma: Collected a team-high nine tackles and broke up a pass against the Sooners… at West Virginia: Logged a game-high-tying seven tackles… Iowa State: Turned in six tackles and his third interception of the season against the Cyclones… Texas: Boasted 12 tackles, one stop behind the line-of-scrimmage and an interception on his senior day victory over the Longhorns… at K-State: Led the Jayhawks in tackles for the final time in his career with 11 stops, while also breaking up a pass against the Wildcats.

2015 (Jr.): Started all 11 games he played, picking up Second Team All-Big 12 honors by the league coaches… Missed the West Virginia game due to injury… Led the nation in solo tackles, averaging 7.9 stops per game… Ranked 14th nationally in total tackles, averaging 10.1 per contest… Claimed the top spot in the Big 12 Conference in tackles per game, averaging 10.1 stops a contest… Led the Jayhawks in total tackles with 111 stops on the season… The first Kansas player since 1990 to make 10 or more stops in six-consecutive games… Posted two tackles for loss, two interceptions, three pass breakups, a forced fumble and a fumble recovery on the year… South Dakota State: Started at safety, making five tackles and breaking up a pass in the secondary… Memphis: Wrapped up a game-high 12 tackles, forcing a fumble and breaking up a pass… Named the Muscle Milk Student Athlete of the Week following the Memphis game… at Rutgers: Gathered six tackles… at Iowa State: Reset his personal best for tackles after a 13-stop performance… Baylor: Just missed turning in double-digit tackles after recording nine stops and a pass breakup… Texas Tech: The Jayhawks’ leading defender after a 10-tackle game, in which he recorded a stop behind the line of scrimmage, the first interception of his career and a fumble return of 66 yards… at Oklahoma State: Racked up 10 tackles in what was his fourth game with double digit-stops… Oklahoma: Notched his fifth game with 10 or more tackles after garnering 10 stops… at Texas: Became the first Kansas player in 15 seasons to make 10 or more tackles in four-straight games after a 13-tackle performance against the Longhorns… at TCU: Continued his double-figure tackling streak after a game-high 12 stops… Also picked off the second pass of his career and returned it 22 yards against the Horned Frogs… West Virginia: Missed the game due to injury… K-State: Returned from injury to log a game-best 11 tackles against K-State.

2014 (So.): KU’s fifth-leading tackler, playing in all 12 contests in 2014… The third-best tackling defensive back after totaling 49 total stops on the season… Also made two tackles-for-loss and had one pass breakup… Southeast Missouri State: Tallied five tackles in his debut for the Jayhawks… at Duke: Collected four tackles… Central Michigan: Posted five tackles… Texas: Recorded two stops… at West Virginia: Notched two tackles… Oklahoma State: Provided three stops… at Texas Tech: Contributed five tackles and his first-career pass breakup… at Baylor: Logged a career-best nine tackles… Iowa State: Recorded three tackles, including one for loss… TCU: Was in on one tackle… at Oklahoma: Posted six tackles, including one tackle in the Sooner backfield… at K-State: In on four stops.

2013 (Fr. at Hartnell College): Spent the 2013 season at Hartnell College under head coach Matt Collins… Helped lead the Panthers to the Coast Conference title, including a 9-2 mark and a win in the Living Breath Foundation Bowl… Earned All-Coast Conference First Team honors… Named Hartnell Defensive MVP after leading the Panthers with 74 tackles and eight interceptions on the season… His 58 solo stops and eight picks led the California Community College Athletic Association (CCCAA)… Also forced two fumbles and was credited with five pass breakups.

High School:  Played primarily on offense at Highland HS (Salt Lake City, Utah) under head coach Brody Benson… Helped lead the Rams to a 7-4 mark during his senior campaign, while completing 32-of-61 passes for 528 yards and six touchdowns… Also rushed for 492 yards and nine touchdowns on 69 carries.

Personal: Signed with Navy out of Highland HS and attended Navy Prep in 2012… Son of Lori and Tony Smithson… Brother, Shaky, played wide receiver at Utah before a stint in the NFL with the Green Bay Packers… Full name is Anthony Smithson, but prefers to go by Fish… Majoring in sport management.