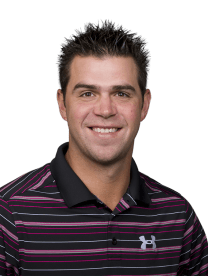 WOODLAND FILE: Redshirted the 2002-03 golf season while attending Washburn University … Played basketball during the 2002-03 season at Washburn … Competed in a total of 50 events, including wins at the 2005 Cleveland State Invitational, 2006 Kansas Invitational, 2007 All-American Golf Classic and 2007 Louisiana Classics … Has 14 other Top-10 finishes, during his collegiate career at Kansas … Qualified three times for the NCAA Regional, twice as a part of the team in 2004 and 2007 and once as an individual in 2006 … Sports a stroke average of 73.28 … Holds a career-best three-round total of 202 (Cleveland State Invitational-2005), a career-best one-round score of 654 (2007 Louisiana Classics), and a career-best finish of first (Cleveland State Invitational-2005, Kansas Invitational- 2006, All-American Golf Classic- 2007, and Louisiana Classics- 2007) … His three-round performance of 202 shots at the 2005 Cleveland State Invitational tied a KU three-round record during the Big 12 era … 2005 Kansas Amateur Champion … Recorded several impressive finishes during the summer of 2006 including a second place finish at the Western Amateur, a tie for fourth at the Porter Cup, and a t-35th at the Northeast Amateur … Currently ranked among the top-25 amateurs in the United States … Named to the 2007 Hogan Watch List … Candidate to represent the United States in the Walker Cup … Currently competing on the PGA Tour.

AS A SENIOR (2006-07): Recorded eight top-10 finishes and 10 top-20 finishes during his senior campaign … Carded par or better round in a remarkable 48.7% of rounds … Claimed the title at the All-American Golf Classic with a three-round score of 211 … The following week, Woodland won the Louisiana Classics with a score of 205 …Woodland[apos]s score of 205 ranks tied for third for best three-round score in Jayhawk history during the Big 12 era … Won the Kansas Invitational with a nine-under score of 207 … Opened the season tied for sixth at the Rich Harvest Farms Intercollegiate … Carded a three-round total of 216 at the Windon Memorial Classic to claim second place … Finished in a tie for fourth at the Prestige at PGA West after firing a score of 211 … Wrapped up the fall season with his fifth top-10 finish at the Landfall Tradition with a ninth place result … Tied for 52nd to open the spring season at the Hawaii-Hilo Invitational, despite carding two under-par rounds … Shot a 227 at the Western Intercollegiate to finish tied for 62nd … Tied for 15th place at the CU-Stevinson Invitational with a score of 225 … Notched a tied for second place finish at the Wyoming Cowboy Classic with a score of 206 … Carded a 223 at the Big 12 Championship to finish tied for 14th … Shot a 226 at the NCAA Central Regional to finish tied for 21st.

PERSONAL: Born on May 21, 1984… Son of Dan and Linda Woodland … Lists basketball as his favorite hobby … The first thing he learned about golf was [quote]swing hard[quote] … Says his dad is the most influential person in his life … He would most like to play a round of golf with Tiger Woods.