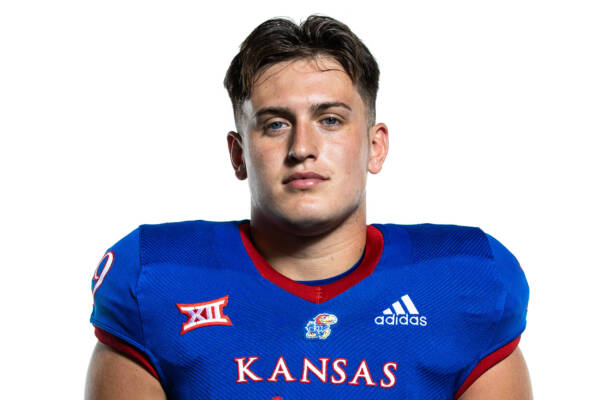 2020 (So.): Saw playing time in eight of KU’s nine games this season, earning five-straight starts to close out the year … Fourth among the KU defenders with 35 tackles (25 solo, 10 assisted) … Recorded 2.0 TFL for a loss of 10 yards … Hurried the opponents’ QBs three times and also broke up a pass to round out his season stats. Coastal Carolina: Made three solo tackles against the Chanticleers in the Jayhawks’ season opener … at Baylor: Recorded 1.0 TFL for a loss of nine yards and made four total tackles against the Bears … at West Virginia: Collected five total tackles (three solo, two assisted) in Morgantown … at Kansas State: In the starting lineup for the Jayhawks for the first time this season at linebacker … Tallied three tackles (two solo, one assisted) … Iowa State: One of three starting linebackers for the Jayhawks against the Cyclones … Recorded five tackles (four solo and one assisted) while also credited with two quarterback hurries on the afternoon … at Oklahoma: Started at linebacker for the third-straight game against the Sooners … Recorded four tackles (two solo, two assisted), a pass breakup and a quarterback hurry … TCU: Co-leader of the Jayhawk defense against the Horned Frogs, totaling six solo tackles … Also recorded one TFL for a yard … at Texas Tech: Started his fifth-consecutive game at LB for the Jayhawks in Lubbock, having played in eight of the team’s nine games this season … Added five tackles (two solo, three assisted) to his season total, to bring it to 35, good for fourth on the team.

2019 (Fr.): Honorable Mention All-Big 12 (Defensive Freshman of the Year) … Played in all 12 of the team’s games, earning starting nods on defensive in the final eight of the season … Fourth on the team in total tackles, accumulating 56 (37 solo, 19 assisted) … Recorded 3.5 TFLs for a loss of 17 yards … Credited with 1.5 sacks, for a loss of 14 yards … Hurried the opponents’ quarterbacks five times in his 12 games played … Also broke up one pass. Indiana State: Saw playing time but did not record any stats … Coastal Carolina: Saw playing time vs. the Chanticleers … Did not record any stats … at Boston College: Tallied five total tackles (three solo, two assisted) for the Jayhawks in Chestnut Hill … Also recorded one quarterback hurry … Both statistics were career bests … West Virginia: Made two solo tackles against the Mountaineers … Recorded his first tackle-for-loss (TFL) as a Jayhawk for a WVU loss of one yard … at TCU: Made his first start as a Jayhawk, at the linebacker position … Led the team defensively with 11 total tackles (nine solo, two assisted) … Oklahoma: Started his second-straight game at linebacker against the Sooners … Tallied one assisted tackle on the afternoon … at Texas: Set a new career high in sacks, accumulating 1.5 on the night, for a loss of 14 yards … Led the team in tackles for the second time this season with his nine total (six solo, three assisted) … Tallied 2.5 TFLs for 16 yards against the Longhorns, a new season and career best … Also credited with hurrying the quarterback once, which also matched his best … Texas Tech: Co-leader for the Jayhawk defense with seven total tackles (six solo, one assisted) in the 37-34 Homecoming victory … Broke up the first pass of his season and KU career against the Red Raiders … Kansas State: Tallied five total tackles (four solo, one assisted) in the annual Dillons Sunflower Showdown … Matched his season/career high with a quarterback hurry against the Wildcats as well … at Oklahoma State: Made his 10th appearance of the season for the Jayhawks in Stillwater, where he made one solo tackle and assisted on three for a total of four on the afternoon … at Iowa State: Set a new season and career high in quarterback hurries with two in Ames … Also assisted on six tackles against the Cyclones … Baylor: Helped lead the Jayhawks’ defensive effort against the nationally ranked Bears by making six solo tackles on the day, tied for the most by a KU defender with Kyron Johnson.

High School: Earned a three-star rating from 247Sports.com and Rivals.com … Helped lead Broken Arrow HS to a 6AI state championship with a perfect 13-0 record in 2018 … Played under head coach David Alexander at Broken Arrow HS … Named a finalist for Oklahoma Defensive Player of the Year by the Tulsa World … Earned All-State First Team honors from The Oklahoman and USA Today at linebacker, after playing on offense until his senior season … Recorded 92 total tackles with two sacks including 52 solos and 40 assists his senior season … He also added 23 tackles-for-loss, three fumble recoveries, two blocked kicks and an interception … Also a standout wrestler, having two state titles to his name.