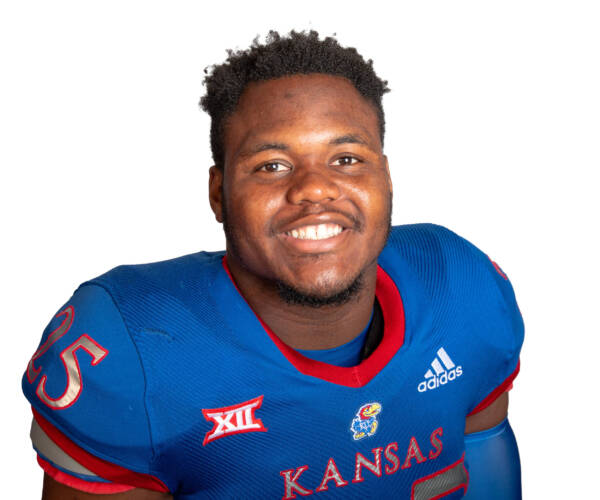 2020 (Jr.): Academic All-Big 12 Football Second Team … Saw playing time in each of the Jayhawks’ nine games of the season … Made six solo tackles in those nine contests … Also carried the ball six times on offense for KU, accumulating 15 yards, an average of 2.5 yards per carry. Coastal Carolina: Made a single solo tackle against the Chanticleers in the Jayhawks’ season opener … at Baylor: Saw playing time against the Bears in Waco but did not record any stats … Oklahoma State: Registered a solo tackle against OSU … at West Virginia: Made two solo tackles on special teams in Morgantown … at Kansas State: One of three Jayhawk captains for the annual Dillons Sunflower Showdown … Contributed a solo tackle in Manhattan in making his fifth appearance of the season … Iowa State: Registered his first-career carries against the Cyclones, rushing the ball twice for a total of seven yards … at Oklahoma: Carried the ball once in Norman for a gain of two yards … TCU: Gained six yards on three carries against the Horned Frogs … Has seen playing time in each of the Jayhawks’ eight games this season … at Texas Tech: Recorded a solo tackle in Lubbock, while playing in his ninth game of the season for the Jayhawks.

2019 (So.): Made appearances for the Jayhawks in the final three games of the season (at Oklahoma State, at Iowa State and vs. Baylor) … Returned two kickoffs during his playing time for a total of 14 yards, with a long kick return of 10 yards.

Personal: Older brother, Kezelee, was also a member of the Kansas football team and now serves as a graduate assistant on the coaching staff … Grew up in Liberia, before he and several family members moved to the United States.