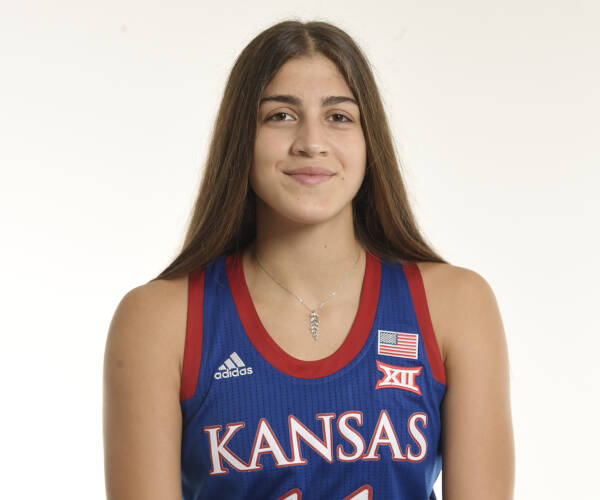 2020-21 (Freshman)
Named to the Big 12 All-Freshman Team … Earned back-to-back Big 12 Conference Freshman of the Week honors on Nov. 30 and Dec. 7 (first consecutive honor for Kansas since conception of the award in 2009, eighth all-time selection for the Jayhawks and is the first Kansas international player to receive honor and to be selected twice) … Ranked in NCAA Division I Women’s Basketball No. 83 for blocked shots (seventh in Big 12), No. 86 for blocked shots per game (sixth in Big 12) and No. 218 in rebounds per game (ninth in Big 12) … Led team in rebounds per game at 7.1, total offensive rebounds at 54 and blocked shots at 34 … Played a total of 564 minutes through 22 games … Shot 45.41 percent from the floor and 74.47 percent from the free throw line … Grabbed a total of 156 rebounds … Served up 39 assists … Rejected 34 shots … Notched 15 steals … Scored a total of 178 points … Posted several double-doubles, last versus TCU in Phillips 66 Big 12 Tournament with 18 points and 10 rebounds

High School/National
Blue Star Europe four-star recruit … Competed with the Greek National Team and Illioupolis GS, a professional team … Earned several FIBA Europe honors such as U18 and U16 first team and U16 Tournament MVP … FIBA silver medalist in 2019 with the Greek National team … Led the team in efficiency, rebounding and was the second-leading scorer all while being the youngest on her team