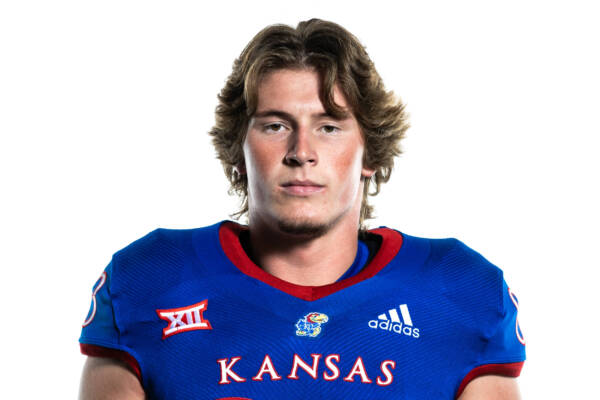 2020 (R-Fr.): Academic All-Big 12 Football Second Team … Connected on six of his nine field goal attempts on the season, good for 66.7% … His long make of the season was from 48 yards out … Kicked off for the Jayhawks once during the season, which was good for 21 yards. Coastal Carolina: Kicked twice against Coastal Carolina, connecting on his first-career field goal and setting a new career long of 47 yards, as time expired to end the first half … Missed the other attempt on the day … at Baylor: Saw playing time against the Bears in Waco but did not record any stats … Oklahoma State: Played against the Cowboys but did not record any stats … at West Virginia: Connected on a 41-yard field goal attempt in the first quarter, which gave the Jayhawks an early 3-0 lead over the Mountaineers … at Kansas State: Attempted a 40-yard field goal in the first quarter against the Wildcats, but was unable to convert … at Oklahoma: Made a 32-yard field goal to end the first half of play n Norman, making the score 3-31 in favor of the Sooners … The successful attempt tied his career high of FG made in a game, set on three previous occasions, most recently at West Virginia (10-17-20) … TCU: Kicked a new career-long field goal when he made a 48-yarder with 4:25 left in the fourth quarter … His previous long was 47, set against Coastal Carolina earlier this season … at Texas Tech: One of three team captains for KU in Lubbock … Connected on 2-of-2 FGs in the game; one in the second quarter from 42 yards out and the other in the third quarter, good for 29 yards.

2019 (Fr.): Saw action in four games as a freshman for KU … Kicked off twice on the season for the Jayhawks, totaling 53 yards, good for an average of 26.5 yards per kick … Attempted one field goal on the season from 40 yards out. Coastal Carolina: Made his Jayhawk debut … Was unable to convert on his lone field goal attempt of the day from 40 yards as time was winding down in the second quarter of play … at Boston College: Kicked off one time for the Jayhawks, which went 40 yards … West Virginia: Had one kickoff against the Mountaineers that went a distance of 13 yards … Oklahoma: Saw playing time against the Sooners, but did not record any statistics.