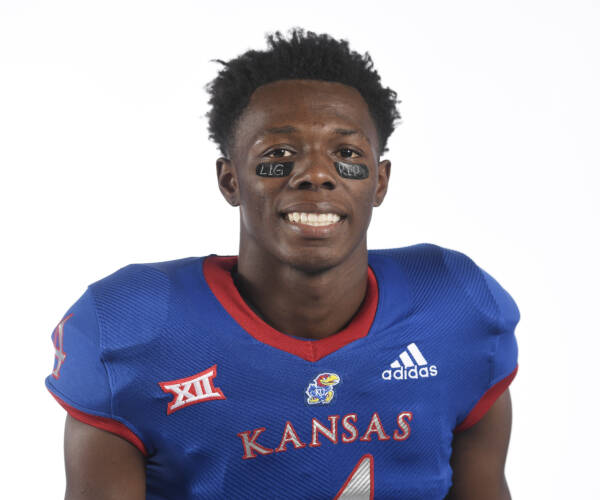 2021 (Fr): Saw playing time in 11 out of 12 KU games as a true freshman, while starting seven of those games … Made his first career start against Baylor … Contributed 21 total tackles to the Jayhawks’ defensive efforts (19 solo and two assisted) … recorded a career high five tackles against TCU … Had 1.0 TFL (for one yard) … On pass defense, the freshman cornerback registered one quarterback hurry, as well as two interceptions, with a total return of 31 yards, on the year, including an interception return for a touchdown in the team’s win over Texas … South Dakota:  Saw playing time vs. the Coyotes … Did not record any stats … at Coastal Carolina: Recorded two solo tackles against the Chanticleers … Baylor: Made his first career start, rallied three solo tackles against the Bears … Duke: Saw action on defense … Did not record any stats … at Iowa State: Made a career high five tackles (solo) … Texas Tech: Secured four tackles (three solo and one assisted) … Oklahoma: Made fifth consecutive start … one tackle (solo) against the Sooners … Kansas State: Saw playing time against the Wildcats, recording one (solo) tackle … at Texas: Started and made four tackles (three solo and one assisted) in the overtime win against the Longhorns … at TCU: Saw playing time vs. the Horned Frogs … recorded one tackle (solo) … West Virginia:  Started … Did not record any stats.

High School: Rated a three star recruit and the No. 28 recruit in the state of Alabama by Rivals … Coached by head coach Clinton Smith at Hillcrest HS … Selected to play in the 2019 Mississippi-Alabama All-Star game … Earned All-State First Team honors in 2018 and All-State Second Team honors in 2017 … Helped lead the Jaguars to the 2017 Alabama Class 3A state championship … Had a four touchdown game in 2018, scoring on a reception, a fumble recovery, a kickoff return and an interception return … Recorded 38 tackles, including seven tackles for loss during his junior season, while forcing eight interceptions, five of which were returned for touchdowns …. Also lettered in basketball, baseball and track & field … Picked up all-region honors in basketball in 2018 … Named to the 2018 All-Defensive Team in basketball.