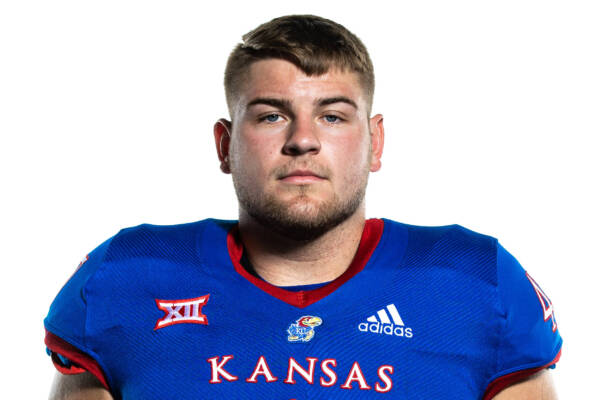 2021: (R-Fr.): Played in nine out of 12 games for the Jayhawks as a tight end … Had eight receptions for 101 yards and two touchdowns on the year … Made first career start in the last game of the 2021 season against West Virginia … at Texas: Caught the game-winning-2-point conversion at Texas in the KU overtime 57-56 win … at TCU: Had four catches for 34 yards and one touchdown against the Horned Frogs with a long reception of 10 yards…West Virginia: Posted a career-high 67 yards on four catches and a touchdown…Had his long reception of 43 yards.

High School: Was an 11-time letterwinner at Plainville high school between football, basketball and track & field … Played under head coach Grant Stephenson for the Cardinals football team … Named first team All Conference all four years in football … Had over 2,000 yards rushing during two seasons at running back, while adding nine interceptions, 425 tackles and 30 total touchdowns over his career … First Team All-State for three years, while being a nominee for player of the year during two of those seasons … In basketball, team was Sub-State Champions twice, while he scored over 1,500 career points … Was named first team All-Conference for three years, first team All-State for three years and player of the year nominee for two years in basketball … Named to the All-Conference team and All-State team in track & field for two years.