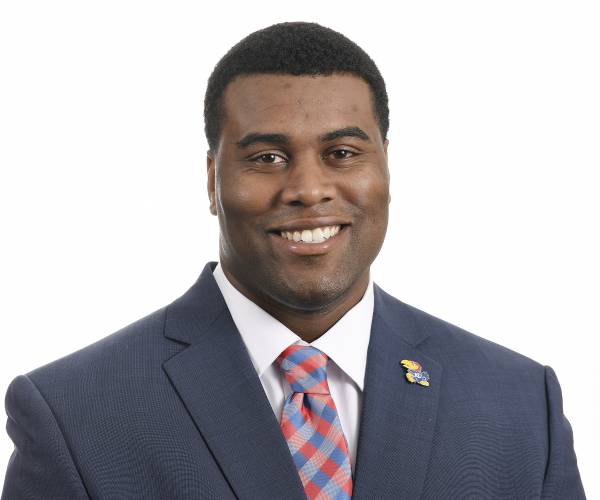 2019 (Sr.): Earned Honorable Mention All-Big 12 honors at the conclusion of the season … In the Jayhawks’ starting lineup for all 12 games … Totaled 26 tackles (21 solo, five assisted) for the year from his DT position … Recorded 2.5 tackles-for-loss of seven yards … Also contributed 0.5 saves for a loss of four yards. Indiana State: Started at defensive tackle against the Sycamores … Recorded three tackles for the Jayhawks … Coastal Carolina: Made two total tackles (one solo, one assisted) vs. the Chanticleers … Also recorded 0.5 sack for a loss of four yards … at Boston College: Contributed four total tackles to the Jayhawks’ defensive effort in Chestnut Hill, a new career high for him while at Kansas … West Virginia: Recorded two solo tackles and one tackle-for-loss, a new Kansas career best … at TCU: Tied his KU career high in TFLs with 1.0, for a loss of two yards … Also tallied three total tackles (two solo, one assisted) in Fort Worth … Oklahoma: Made one solo tackle against the Sooners … at Texas: Contributed a solo tackle to the Jayhawks’ defensive effort against the Longhorns … Texas Tech: Recorded new season and career highs in tackles with five (all of the solo variety) in Kansas’ Homecoming victory over the Red Raiders, 37-34 … Kansas State: Tallied one solo tackle against the Wildcats … at Oklahoma State:Made a solo tackle in Stillwater against the No. 25-ranked Sooners … at Iowa State: Has now started each of the Jayhawks’ 11 games this season … Recorded a pair of tackles (one solo, one assisted) against the Cyclones in Ames … Baylor: Made a solo tackle in his final collegiate game as a Jayhawk.

Personal: Son of Kyle Roach and Wayne Brown … Has one sister, Tiyana … Teammate of fellow Jayhawk Miles Kendrick at CSM.