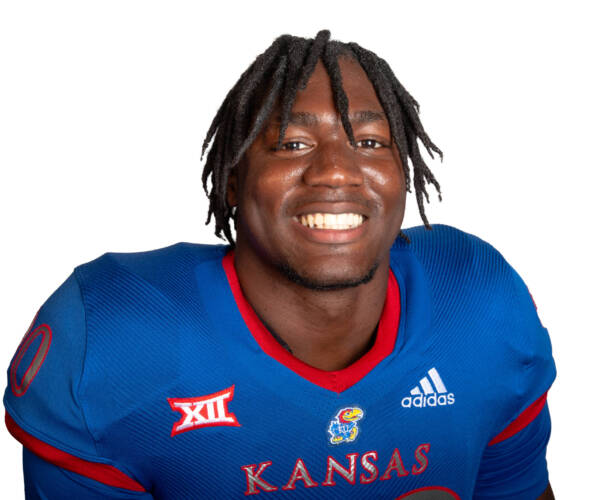 2020 (Fr.): Played in six of the Jayhawks’ nine games this season … Totaled three tackles (one solo and two assisted) as well as 1.0 TFL (for a loss of a yard) in his playing time in his first collegiate football season. at Baylor: Made his Kansas debut against the Bears, but did not record any stats … Oklahoma State: Assisted on one tackle against the Cowboys for his first stats as a Jayhawk … Iowa State: Donned the Crimson and Blue for the third game this season, but did not register any statistics against the Cyclones … at Oklahoma: Assisted on a tackle against the Sooners, registering his second tackle of the season … TCU: Got his first-career tackle-for-loss in the fourth quarter against the Horned Frogs … It was also his first-career solo tackle as a Jayhawk … at Texas Tech: Made his sixth appearance for KU in the team’s nine-game season.

High School: Rated a three-star prospect by 247Sports.com … Helped lead Carver High School to an 8-3 mark in 2018 … Played for head coach James Thompson at Carver … Also lettered in basketball, helping lead the Wolverines to the Alabama Class 6A state title in 2018.