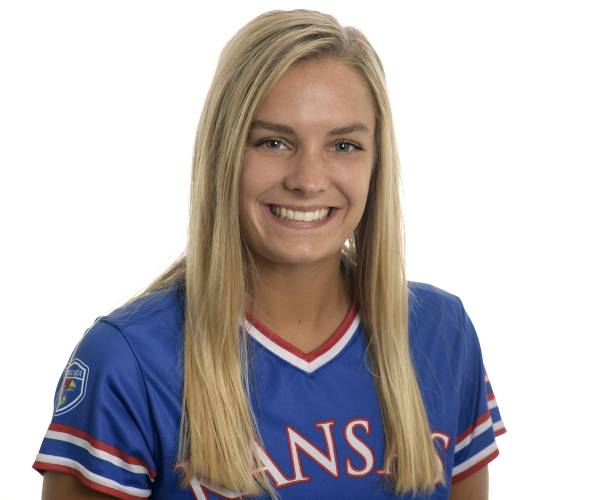 SENIOR (2019)
Named a Third Team All-American after one of the best seasons by a player in program history … Earned spots on both the All-Big 12 and All-Region First Teams … Led the conference in goals (17), points (43) and game-winning goals (7) … Her 43 points were a single-season program record and her seven game-winners tied her own school record … Named to the Big 12 Championship’s All-Tournament Team … Posted two hat tricks on the year, the first in the season-opener vs. Nebraska and the second in KU’s NCAA Second Round win over Xavier … Named the Big 12 and NCAA Player of the Week following her four goals and two assists in the opening two matches of the season … Ended her career with 82-consecutive starts, one match shy from tying the program record … Also an Academic All-Big 12 Second Team selection.

SOPHOMORE (2017)
Started in all 20 matches … Averaged 70.6 minutes per contest … Tallied 12 matches where she played 70 minutes or more … Scored a career-high six goals and added two assists for 14 points … Led the team with 52 shots on the year … Took four or more shots in six games … Her 2.6 shots per game ranked her ninth in the Big 12 … Scored the game winning goal at Oklahoma (10/20) … Led the team with 49 corner kicks taken … Named to the Academic All-Big 12 Second Team.

FRESHMAN (2016)
Saw action in all 21 of KU’s matches in 2016 and was a member of the starting lineup in each of the final 16 contests … Scored five goals and added two assists for 12 points, the most by a KU freshman since 2012 … Named to the Big 12 All-Freshman Team … Led the squad with 54 shots on the year and posted four or more shots six times … Averaged 3.3 shots per game in conference play, which ranked third in the Big 12 … Saw over 66 minutes per appearance, which included seven matches in which she play 75 minutes or more … Kansas’ most accurate shooter, putting over 51 percent of her attempts on frame … Tied for the team lead with three game-winning goals, two of which came in conference play.

PERSONAL
Daughter of Dave and Kris McClure … Has three older siblings: Kassie (29), D.J. (23) and Cooper (21) … Father, Dave, played collegiate baseball at Arkansas and Wichita State, and Major League baseball for the Detroit Tigers … Majoring in nursing … Aspires to become a physician’s assistant and play on the USA Women’s Soccer Team.