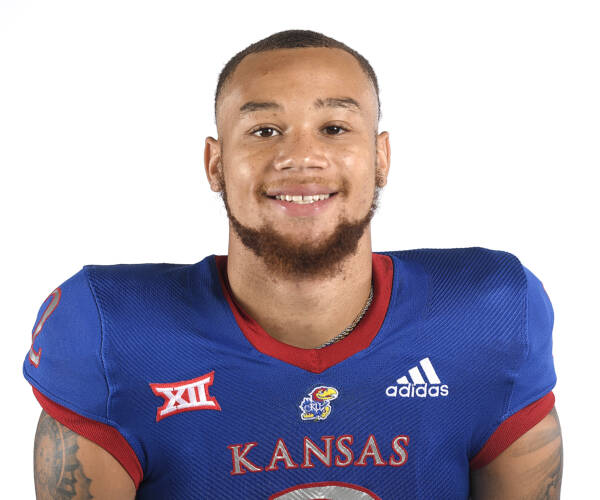 2021 (R-Fr): Contributor for the Jayhawks that saw playing time in 11 out of 12 KU games, while starting 9 of those games … Recorded 27 catches for 316 yards and three touchdowns … good for an average of 11.7 yards per catch, with a long reception of 37 yards … South Dakota: Caught his first two career touchdowns in the season opener, including the game-winner for a total of three catches and two touchdowns … at Coastal Carolina: Saw playing time against the Chanticleers … Had one reception of 37 yards (season high reception) and longest of his career … at Duke: First start … Made eight catches, good for 68 yards … Texas Tech: Saw action against the Red Raiders …  Made one catch for 16 yards, including a touchdown … Oklahoma: Compiled four catches for a season high of 73 yards … Oklahoma State: Saw action against the Cowboys … Recorded one catch for 14 yards … Kansas State: Grabbed three catches for 21 yards … at Texas: Started against the Longhorns … Made four catches for 30 yards, contributing to the Jayhawks OT win … at TCU:  Recorded one catch for 14 yards and one solo tackle… West Virginia: Saw playing time … Recorded one catch for 14 yards.

2020 (Fr.): Played in the first four games of the season, earning a start at Baylor … Caught six passes for a total of 45 yards, good for an average of 7.5 yards per catch. Coastal Carolina: Made his Kansas debut in the Jayhawks’ season opener … Caught two passes for 18 yards against the Chanticleers … at Baylor: Started his first-career game at wide receiver against the Bears … Had one catch for seven yards … Oklahoma State: Accumulated 20 yards against OSU on three receptions with a long catch of 11 yards … at West Virginia: Saw playing time against the Mountaineers, but did not record any stats.

High School: Rated as a three star recruit by Rivals.com, 247 Sports and ESPN … The No. 43 prospect out of the Lone Star State, according to the Dallas Morning News … Ranked as the No. 81 recruit in the state of Texas according to Rivals … Projected to be a Power-5 starter according to 247Sports.com … Among the top-100 high school recruits in the state of Texas, according to the Waco Tribune-Herald … In his senior season he recorded 53 receptions with 877 receiving yards, with 15 receiving touchdowns … Earned first-team all-district honors as a junior … Earned first-team all-district selection as a sophomore.