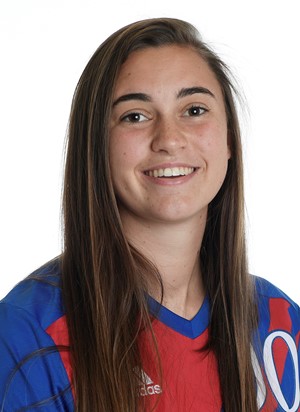 2017 (SENIOR)
Started all 20 games in net for the Jayhawks … Her 1.20 goals against average was eighth in the Big 12 … Finished with 63 saves on the year, ranked seventh in the conference … Her 3.15 saves per game put her sixth in the Big 12 … Recorded eight wins on the year … Finished the season with four shutouts … Had a season-high eight saves against Brigham Young (9/18) … Named to the Academic All-Big 12 First Team.

2016 (JUNIOR)
Started in goal for the Jayhawks in 17 of 21 matches, amassing 10 wins for the second-straight season … Posted a goals-against average of 0.81, the fourth-lowest single-season GAA in program history … Tallied four shutouts, which included a season-high eight-save outing against Colorado (8/26) … Her .785 save percentage was a career best … Allowed more than one goal in the just two of her 17 outings … Allowed just seven goals in conference play, the second-fewest among Big 12 keepers … Posted four saves or more in seven of the eight conference matches … Named to the Academic All-Big 12 Second Team.

2015 (SOPHOMORE)
Starting goalkeeper for each of the Jayhawks’ 21 matches in 2015 … Played the full 90 in all but three of KU’s matches … Named to Big 12 Championship All-Tournament Team after allowing just two goals and tallying 10 saves in 270 minutes of tournament action … Saw a total of 1,894 minutes during the 2015 season, the fifth-most by a keeper in program history … Selected as Big 12 Defensive Player of the Week on Oct. 13 after posting a pair of shutouts and 11 saves versus Baylor (10/9) and Oklahoma (10/11) … Twice tallied a season-high six saves vs. Oklahoma (10/11) and Texas (11/4) … Notched six shutouts on the year, the fifth-most by a KU keeper in a single season … Named to the Academic All-Big 12 First Team.

2014 (REDSHIRT FRESHMAN)
Picked up first start in-goal of her career in the Jayhawks’ 2-1 win over UT-San Antonio (8/29) … Faced 11 shots against UTSA, making two saves and allowing one goal … Started and played all 90 minutes in KU’s 2-1 loss to Oklahoma (11/5) in the Big 12 Championship quarterfinal … Faced 13 shots against the Sooners, making four saves and allowing two goals.

LEE’S SUMMIT NORTH HIGH SCHOOL
Four-year varsity letterwinner for head coach Ryan Kelley … Starter for Class-3 state runner-up that finished with a record of 23-4 her junior year … Tallied nine shutouts, including seven-straight, her junior year for a shutout percentage of .539 … Named Girls Class-3 Co-Goalkeeper of the Year and to the all-state first team in 2012 … 2012 Girls Class-3 All-Kansas City Goalkeeper of the Year … Amassed six shutouts her senior year … Helped the Broncos to the Missouri Class-3 quarterfinals and a 19-6 record her sophomore season … Member of National Honor Society as well as the Youth Advisory Council from 2010-13.

CLUB (STING 95)
Member of head coach Tino Kibune’s team for three years … Finished third in the U17 Midwest Regional League Premier Division in 2012 … Claimed victory in the Missouri State Cup in the spring of 2012 before claiming a runner-up finish in the fall.