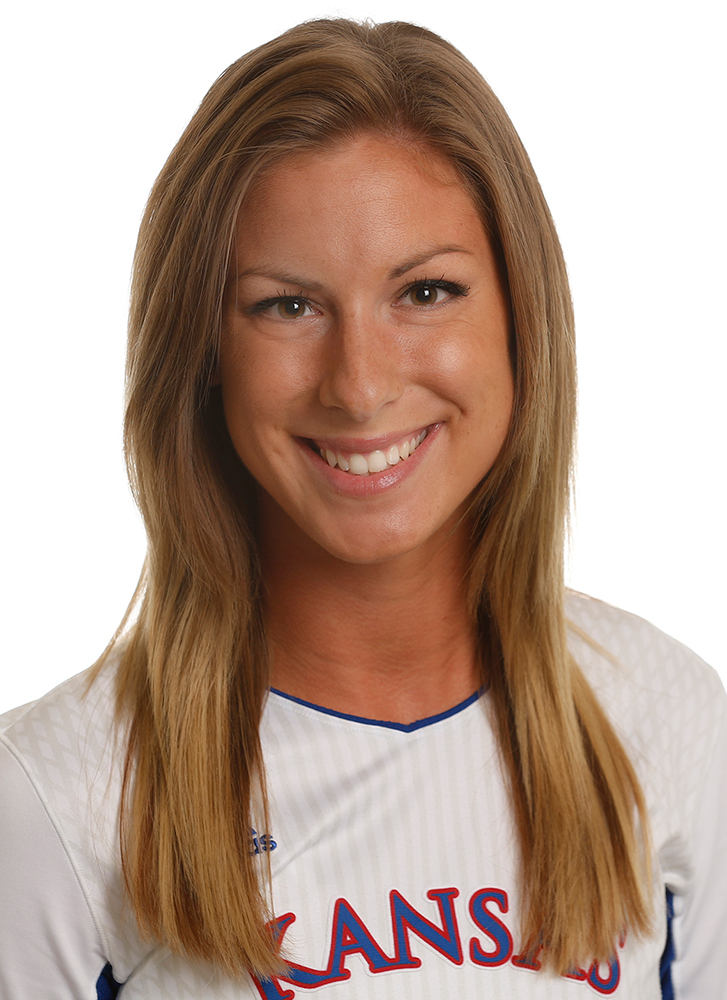 OVERVIEW
• Serving specialist, backup setter, and a veteran team leader for the Jayhawks entering her fifth season with the program in 2016.
• Two-time Academic All-Big 12 honoree.

2014 (SOPHOMORE)
• Saw action in 31 matches as a serving specialist for the Jayhawks … Aced 13 serves, racked up 40 digs and totaled 11 assists for the year.
• Appeared in all three sets during the opening match, served a pair of aces and picked up a pair of digs in the victory over Utah Valley (Aug. 29).
• Assisted on two Jayhawk attacks during their four-set win against Cleveland State (Sept. 19).
• Recorded three digs during the Jayhawks sweep of TCU (Oct. 18).
• Served a pair of aces and tallied four digs in a road loss to TCU (Nov. 1).
• Set a new season-best in digs (five) and served an ace in KU’s four-set win over Iowa State (Nov. 19).
• Served a season-high two aces in KU’s opening round NCAA Championship loss to Little Rock (Dec. 5).

2013 (REDSHIRT FRESHMAN)
• Appeared in 22 matches as a serving specialist for Kansas … Finished the year with 10 service aces to go along with 18 digs.
• Saw her first action of the season against Bowling Green and recorded the first kill of her career.
• Served her first career ace during KU’s three-set win over Oklahoma (Oct. 9).
• Reeled-off a four match streak of scoring at least one ace beginning with a service ace against West Virginia (Oct. 19) followed by one each against Iowa State (Oct. 23), Baylor (Oct. 30) and TCU (Nov. 2).
• Served aces in consecutive matches against Texas Tech (Nov. 23) and Denver (Nov. 26).
• Had a career-high two digs at Oklahoma (Nov. 30).
• Served a career-high two aces in KU’s opening round NCAA Championship victory over Wichita State (Dec. 6).

HIGH SCHOOL
• Four-year letterwinner at Lincoln Southwest High School under head coach Mary Schropfer … Holds the Silverhawks record with 145 career service aces, due to a serve percentage higher than .930 in each of her last three seasons.
• Named academic all-conference and all-state … Cranked out nearly 2,200 assists from her sophomore to senior seasons, highlighted by 924 in her junior year … Posted 150-plus digs every season and nearly broke the 200-dig mark as a senior (196).
• Also competed on the track team.

CLUB
• Played for the Nebraska Power under head coach Mike Wiese … Helped her team to a third-place finish at the 2011 Nationals in Atlanta, Georgia; third place at the 2012 Indiana Qualifier and won the 2012 Kansas City Qualifier.

ACADEMICS
• Majoring in supply chain management in the School of Business at The University of Kansas.
• Two-time Academic All-Big 12 honoree.