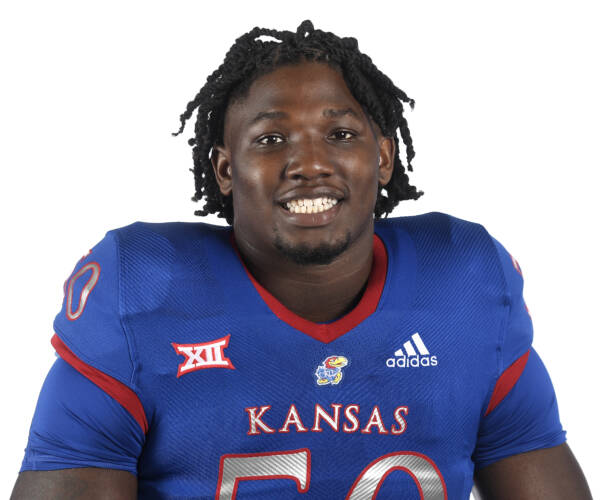 2020 (RFr.): Academic All-Big 12 Football First Team … In the Jayhawks’ starting lineup for five of the eight games in which he played … Led the team with 7.5 TFL (of 17 yards)In a three-way tie for sixth place among KU’s defensive leaders with 27 total tackles on the season … Seventeen of those tackles were solos, while the other 10 were assisted … Forced one fumble and recovered another, which were accomplished in the same game (at Texas Tech). Made appearances in the Jayhawks’ first two games of the season (Coastal Carolina and at Baylor), but did not record any stats … Oklahoma State: Recorded three tackles (one solo, two assisted) against the Cowboys for his first stats of the season … at West Virginia: In the starting lineup at defensive tackle for the first time … Racked up six tackles and the first 3.0 tackles-for-loss (TFL) of his KU career … at Kansas State: After starting his second-straight game of the season, recorded 2.5 TFL in Manhattan after setting his career high of 3.0 last week at WVU … In addition, made four total tackles (three solo, one assisted) in the Dillons Sunflower Showdown … Iowa State: Made three solo tackles against the Cyclones in addition to recording a TFL for the third-straight game … Made his third start of the season, while having played in all six games for the Crimson and the Blue … TCU: Set a career high in solo tackles with four … His previous best was three, which he had accomplished twice, most recently earlier this season against Iowa State … Overall on the day, registered five tackles and one TFL (for a loss of a yard) … at Texas Tech: In the starting lineup at DT for the fifth game this season, while having played in eight of the Jayhawks’ nine contests … Tallied six total tackles (four solo, two assisted) in Lubbock … In the second quarter, senior Nate Betts forced a TTU fumble and Harris fell on the ball … The fumble recovery was Harris’ first of his career … In the fourth quarter, Harris punched the ball loose for KU’s third forced fumble of the day, which was recovered and returned 15 yards by KU … The forced fumble was also a career first for Harris.

2019 (Fr.): Played in the first and last games of the season for KU … Contributed a tackle in each game he played for a total of two on the season (one solo and one assisted). Indiana State: Saw playing time in the season opener … Was in on one tackle … Baylor: Made his second appearance of the season for the Jayhawks against the Bears … Again recorded a solo tackle, tying his season and career highs.