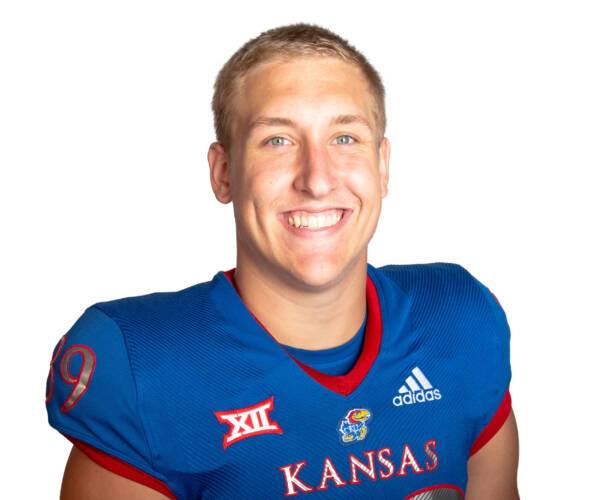 2021 (Jr.): Played in 11 of the Jayhawks’ twelve games, while starting in nine … Hauled in 13 catches for 128 yards and one touchdown … His longest catch was for 20 yards … Tallied three solo tackles on the year … South Dakota: Had four receptions for 58 yards, including a one-handed grab on the sideline that was selected for SportsCenter’s Top 10 Plays … Baylor: Collected three catches for 13 yards … Texas Tech: Caught a single pass for seven yards … at Oklahoma State: Had one catch for a six-yard gain … Kansas State: Made two catches for 13 yards … at Texas: Posted two catches for 31 yards and his first career touchdown in the 57-56 overtime win against the Longhorns.

2020 (So.): Academic All-Big 12 Football First Team … A starter for KU’s offense in six of the nine games in which he played … Caught five passes for a total of 57 yards, good for an average of 11.4 yards per reception … His long catch of the year was 27 yards while his average receptions per game was 6.3 for the season. Coastal Carolina: Played in the Jayhawks’ season-opener, but did not record any statistics … at Baylor: Made his first start of the season at tight end against the Baylor Bears, did not record any stats … Oklahoma State: Played against the Cowboys but did not record any stats … at West Virginia: Kansas’ starting tight end in Morgantown, his second starting assignment of the season … Did not record any stats … at Kansas State: One of three Jayhawk captains for the annual Dillons Sunflower Showdown … Made his first catch of the season in the second quarter for 27 yards, the longest reception of his career … His previous long of 23 yards came in 2019 … Set a career high in catches with two and yards with 38 … His previous best of one reception was made twice in 2019, most recently at TCU … Iowa State: Started at fullback for the Jayhawks against ISU … His three receptions on the day set a new career high and totaled 19 yards of offense … at Oklahoma: One of three team captains against the Sooners … Earned his fifth start of the season in Norman, this time at wide receiver … Has played in all seven games this season … TCU: One of KU’s four captains for the game … Started his sixth game of the season (TE) and has seen playing time for the Jayhawks in all eight of their contests … at Texas Tech: The starter at tight end for KU in Lubbock, his seventh start of the season, while having seen playing time in all nine games … Did not record any statistics on the day.

Personal: Son of Tina and Tim Fairchild … Plans to major in engineering.