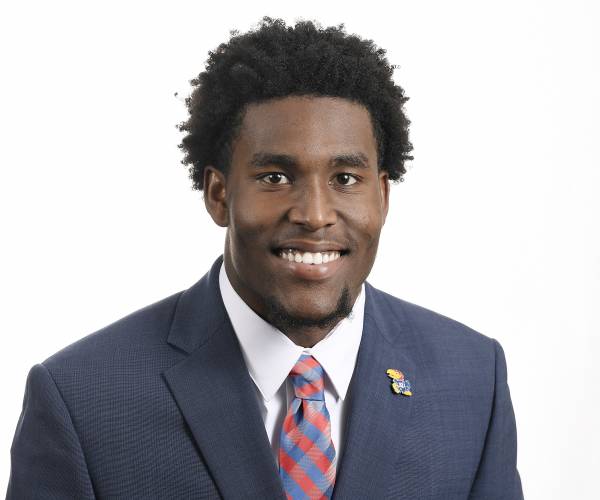 2019 (Sr.): Earned Honorable Mention All-Big 12 accolades at the conclusion of the season … Started in the KU backfield in each of the team’s 12 games this year … Led the Jayhawks’ defense with 72 total tackles (54 solo, 18 assisted) … Made 1.5 tackles-for-loss of four yards … Forced a fumble on two different occasions … On pass defense, broke up two opponents’ passes and made one interception on the season. Indiana State: Started at safety in the season opener … Recorded four total tackles and defended one pass … Coastal Carolina: Made four solo tackles against the Chanticleers … at Boston College: Tallied seven total tackles (five solo, two assisted) in Chestnut Hill … West Virginia: One of KU’s three players to record nine tackles (seven solo, two assisted) to lead the team’s defensive effort against the Mountaineers …at TCU: Totaled six tackles in Fort Worth (five solo, one assisted) … Also had a TFL of one yard … Oklahoma: Broke up one Sooners’ pass, which he nearly intercepted … Made a pair of solo tackles … at Texas: Forced his first fumble of the season against the Longhorns, the sixth of his Kansas career … Tallied six tackles total (three each solo and assisted) to assist the Jayhawks’ defensive effort against the nationally ranked Longhorns … Texas Tech: Helped the Jayhawks to a 37-34 Homecoming victory with his five total tackles (four solo, one assisted) against the Red Raiders … Kansas State: Again contributed five total tackles (four solo, one assisted) for the KU defense in the annual Dillons Sunflower Showdown … at Oklahoma State:Recorded his seventh-career forced fumble against the nationally ranked Cowboys, which moved him into a tie for ninth among active FBS leaders in the category … Tied his season high in tackles with nine, all solo tackles, against the Cowboys to lead the Jayhawks’ defensive effort in Stillwater … In addition, recorded 1.0 TFL, surpassing his season high of 0.5 TFLs at TCU and tying his career high, previously set three other times in his Kansas career … at Iowa State: Started his 11th-consecutive game of the season at safety for the Jayhawks … Led the Kansas defensive effort with 13 total tackles, seven of them solo, his most of the 2019 season (previously nine, achieved twice, most recently at Oklahoma State [Nov. 16]) … The total surpassed his career high of 12 tackles in a KU game, previously achieved two times, most recently against Texas in 2016 … His double-digit tackles (13) Saturday in Ames were his fifth double-digit tackling game in his Kansas career (previous four: 10 at K-State in 2018; 10 vs. West Virginia in 2017; 12 vs. Iowa State and 12 vs. Texas in 2016) … Picked off Iowa State QB Brock Purdy in the third quarter with 1:30 on the clock for his first interception of the 2019 season, which marked his fifth-career INT of his four-year career in the Crimson and the Blue … Baylor: Made three tackles (two solo, one assisted) against the nationally ranked Bears on Senior Day, in which he started his 12th game of the year for KU.

2017 (So.): Played in 10 games … Started eight contests … Ranked second on the team and 13th in the Big 12 with 70 total tackles … Notched 58 solo stops, which ranked fifth in the Big 12 and 15th in the FBS  … Made 2.0 tackles-for-loss … Broke up one pass … Intercepted two passes …  SEMO: Collected five solo tackles … Central Michigan: Picked up seven solo hits … at Ohio: Turned in nine tackles, including four solos, and a pass breakup … Also recorded his first interception of the season, a touchdown-saving pick in the end zone … Recorded 1.0 TFL … West Virginia: Gathered a season-high 10 tackles, all solos … Texas Tech: Recorded nine tackles, eight of which were solo hits … Picked off his second pass of the season, returning it two yards … at Iowa State: Registered five tackles, all solos … at TCU: Had seven total stops … K-State: Turned in six solo tackles and added 1.0 TFL … Baylor: Collected seven total tackles before leaving the game with an injury … at Oklahoma State: Came off the bench to post five solo tackles.

2016 (Fr.): Saw action in 11 games … Started the final eight contests of the year … Tallied six or more tackles in all but three games … Recorded a season-high 12 tackles in consecutive weeks against Texas and Iowa State … Posted 1.5 TFLs on the season … Forced two fumbles … Picked off one pass in overtime of KU’s win over Texas … at Memphis: Earned the first extended time of his career and made the most of it by turning in four tackles … at Texas Tech: Led the field with a career-high nine stops, as well as a pass breakup, against the Red Raiders … TCU: Started at safety for the first time in his career and secured seven tackles, including 0.5 for loss … at Baylor: Started in consecutive weeks and provided a team-best eight stops, along with a tackle behind the line-of-scrimmage … Oklahoma State: Posted nine tackles and a pass breakup in the end zone against the Cowboys … at Oklahoma: Notched six tackles and the first forced fumble of his career … at West Virginia: Tallied one tackle against the Mountaineers … Iowa State: Erased his previous personal best with a 12-tackle performance against the Cyclones … Texas: Tied his career high with 12 tackles, while also forcing a fumble and notching a tide-turning interception in overtime of the victory over the Longhorns … at K-State: Tallied nine tackles against the Wildcats.

High School: Earned three letters at Landry Walker HS under head coach Emanuel Powell … A three-time all-district honoree at safety … Collected 110 tackles, four interceptions and three forced fumbles on defense as a junior in 2015 … Also returned one punt for a touchdown … As a sophomore, tallied 125 tackles and five forced fumbles … Helped lead the Charging Buccaneers to the Louisiana Class 5A state semifinals all three years … Also lettered in track & field … Participated in the state championship track meet in long jump and triple jump.

Personal: Son of Calandra Lee … Has one brother, Shawn Theard, and one sister, Kendrionne Lee … Majoring in liberal arts and sciences.