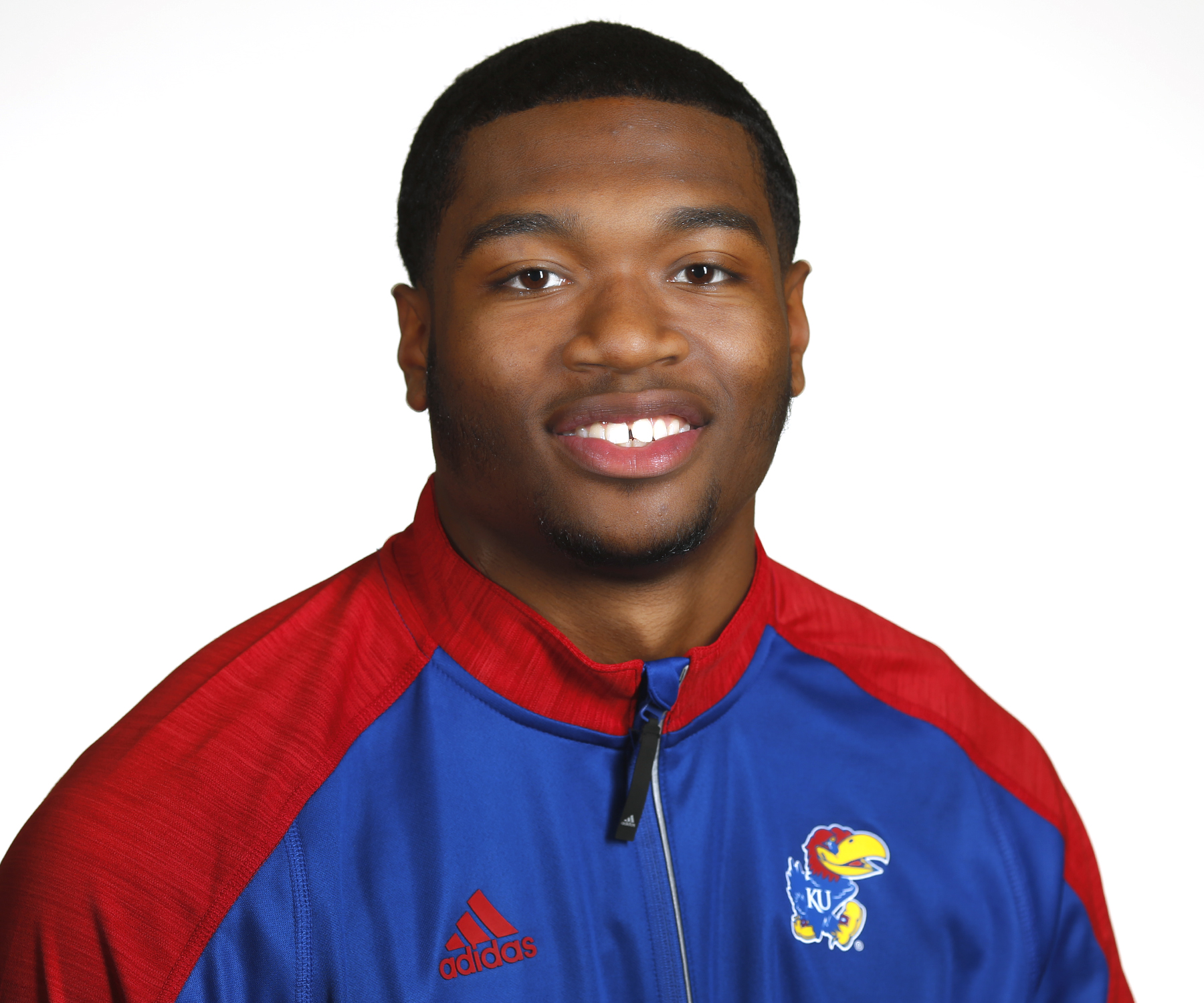 2016 (RJr.): Played in eight games, starting seven at quarterback… Threw for a team-high 1075 yards after completing 112 passes… Connected on seven touchdowns… Threw nine interceptions out of 191 attempts… Ran 28 times for 91 yards… Completed a season-high 24 passes for 250 yards and a score against Oklahoma State… Threw a career-high three touchdowns against Rhode Island… Rushed six times for 30 yards against Oklahoma State… Rhode Island: Earned a start at quarterback and tied his career-high with three touchdown passes, while completing 18-of-25 passes for 199 yards in KU’s win over the Rams… Also ran four times for 17 yards… Threw 130-straight passes before tossing a pick against URI… Ohio: Successful on 17-of-24 pass attempts for 198 yards and two scores… Threw at least two touchdowns in consecutive games, the first player to do so since 2014… at Memphis: Completed 13 of his 22 attempts for 87 yards… Also picked up 12 yards on four carries against the Tigers… at Texas Tech: Started at quarterback, threw for a touchdown and 97 yards on nine completions… TCU: Did not see any game action… at Baylor: Did not see any game action… Oklahoma State: Earned a start at quarterback and contributed season highs in completions (24), attempts (40) and yards (250)… Also threw a 68-yard touchdown strike against the Cowboys… at Oklahoma: Tossed for 120 yards and two interceptions after completing 20 passes out of 36 attempts… at West Virginia: Threw for 124 yards after completing 11-of-24 passes… Iowa State: Did not see any game action… Texas: Did not see any game action… at K-State: Played one snap on a two-point attempt against the Wildcats.

2015 (Jr.): Saw action in four games before his season was cut short due to injury… Completed 66-of-105 passes for 752 yards and two touchdowns… Also ran 45 times for 113 yards, adding a score… Threw 100-straight passes without an interception… South Dakota State: Turned in a career day to begin his junior season… Tossed one touchdown and set personal bests in completions (25), attempts (38), passing yards (291) and rushing yards (94) against the Jackrabbits… Memphis: Ran for his second-career rushing touchdown, while completing 13-of-28 passes for 118 yards and adding 18 more yards on the ground… at Rutgers: Did not start due to illness, but came on in relief and completed 13-of-18 passes for 193 yards… at Iowa State: Completed 15-of-21 passes for 150 yards and a touchdown, tossing a 47-yard scoring strike, before leaving the contest due to injury… Missed the remainder of the season due to injury.

2014 (So.): Named to the Academic All-Big 12 Second Team… Threw for 701 yards and five touchdowns with 64 completions on 128 attempts, while also running 52 times for 63 yards in 2014… Started the first five games of 2014 and played in seven games overall… Southeast Missouri State: Completed 12 passes on 24 attempts for 196 yards and three touchdowns with a long completion of 67 yards in KU’s victory over the Redhawks… at Duke: Threw 27 times for 89 yards and carried the ball for a career-long rush of 24 yards… Central Michigan: Set career highs in passing completions (23), attempts (33) and yards (226), while throwing two touchdowns and hauling in his first-career catch… Texas: Completed 12-of-31 passes for 140 yards and ran 19 times for 32 yards… at West Virginia: Completed 4-of-10 passes for 42 yards and ran for five yards on seven attempts… at Texas Tech: Came on in relief for two plays, but did not record any statistics… Iowa State: Completed 2-of-3 passes for eight yards, while running once for five yards.

2013 (Fr.): Played in seven games, starting three… Completed 23-of-63 passes for 227 yards on the season… Finished as KU’s third-leading rusher with 214 yards on 66 carries… Scored one rushing touchdown… His long completion of 45 yards on the season came vs. Baylor… Oklahoma: Saw the first action of his college career… at Texas: Carried the ball four times for 34 yards and his first career rushing touchdown… at Oklahoma State: Recorded 18 carries for 55 yards… West Virginia: Earned his first-career start vs. the Mountaineers, picking up the win… Rushed for 60 yards on 13 carries, while also completing 5-of-12 passes for 61 yards… at Iowa State: Rushed 12 times for 44 yards… One of two true freshmen on the roster to see action in 2013.

High School: Earned first-team all-state honors after leading Bishop Miege High School to the Kansas Class 5A State Championship game in 2012… Rated a three-star quarterback prospect by Rivals.com… Threw for 2,759 yards and 25 touchdowns as a senior at Bishop Miege HS where he was coached by Jon Holmes… Also rushed for 626 yards and five TDs in 2012… A 2012 Simone Award Finalist (top player in Kansas City Metro Area)… Completed 161-of-255 passes for 2,448 yards and 31 touchdowns as a junior at Bishop Miege, earning 2011 Kansas Gatorade Player of the Year honors… A 2011 Simone Award Finalist and picked up First Team All-Eastern Kansas League and Second Team All-State honors by the Kansas City Star… Also played basketball at Miege, earning three letters… Averaged 18.0 points and 6.0 rebounds per game as a senior… Named first-team all-conference, second team all-metro and was selected to play in the 2013 Kansas vs. Missouri All-Star Game in Overland Park, Kansas.