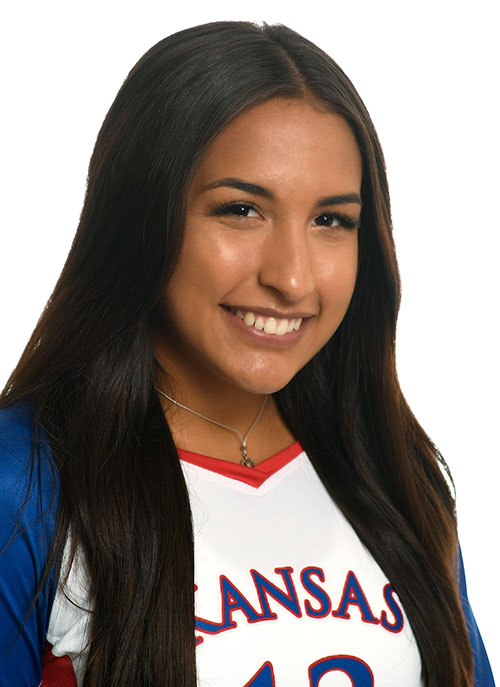 2016 (REDSHIRT FRESHMAN)
One of five Jayhawks to play in all 30 matches during the 2016 season … Started in 15 matches, including 10 of KU’s first 11 contests … Averaged 1.76 digs per set, 0.51 kills per set and 0.11 blocks per set … Started the season opener against Mississippi State (Aug. 26), recording her first-career dig and block … First-career kill came against Eastern Washington (Aug. 27), finishing with two kills, one dig and one block … Aced Chicago State (Sept. 2) three times in just two sets played … Averaged 3.9 digs per set during the Bluejay Invitational (Sept. 8-9) … Recorded a season-high 22 digs with six kills in a five-set win against host Creighton (Sept. 8) … First-career double-double came against Chattanooga (Sept. 9) with a season-high 10 kills and 13 digs … Posted 10 digs and three aces during KU’s five-set win over Xaiver (Sept. 16) at the Stacey Clark Classic … Registered her fifth and final double-figure dig effort with 12 in a four-set win over Baylor (Oct. 1) … Her five kills during KU’s four-set win at Iowa State (Oct. 5) were her most during Big 12 play … Zipped a pair of aces against No. 2 Texas (Oct. 29), helping Kansas defeat the Longhorns for the first time since 2003 … Recorded nine digs to help Kansas clinch at least a share of the Big 12 regular-season title by defeating Iowa State (Nov. 19) … Started in KU’s NCAA Tournament first-round match against Samford (Dec. 1), recording eight digs and an ace.

2015 (FRESHMAN)
Tore her ACL during international competition in the summer of 2015, forcing her to redshirt her true freshman season at KU.

PUERTO RICO NATIONAL TEAM / HIGH SCHOOL
A Puerto Rico native who experienced a much different high school career due to being recruited by her country’s national team (TEAM PUR) … Was on her way to Mexico during the official first day of the 2014 NLI signing period to play with TEAM PUR in the XXII Central American and Caribbean Games of Veracruz 2014 … Fourth-best scorer at the U18 Pan American Cup in Guatemala City after leading her team in kills against Slovenia in April 2013 … Ranked as the 14th-best scorer in the world, top-20 in kills and top-40 in blocks at the 2013 U18 World Championships in Thailand … Named the U16 Power League West Coast MVP in 2012 and went on to claim MVP honors again at the U17 Angel Matos Cup in 2013 … Also named to the U17 Power League East Coast All-Star Team in 2013.

ACADEMICS
Majoring in sport management in the School of Education and minoring in business at the University of Kansas … Four-time member of the Big 12 Commissioner’s Honor Roll … Earned a 4.0 GPA in the spring of 2017 … An honor student at Colegio Ponceño with a GPA above 3.6 throughout her high school career.