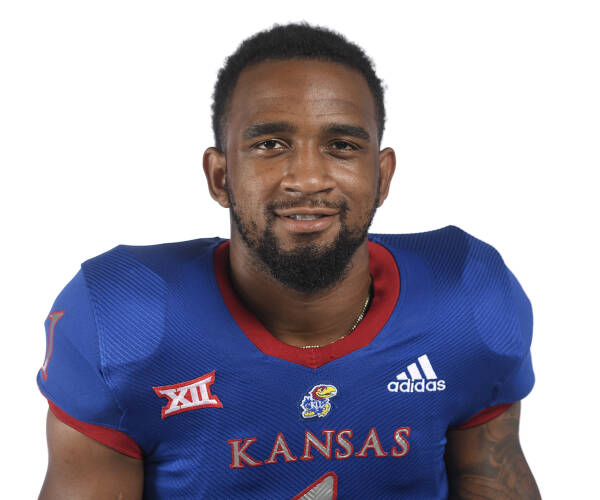 2020 (Jr.): KU’s starter at running back in each of the first four games of the season … In those four contests, carried the ball 51 times for 196 net yards, good for an average of 3.8 yards per carry … Scored two rushing TDs … His long carry of the season was for 21 yards while his average yards per game was 49.0 … Also hauled in six catches from KU’s QBs for 31 yards, with a long reception of 13 yards … He averaged 5.2 yards per catch … On special teams, Williams returned seven kickoffs for 197 yards and scored one touchdown … His average kick return was 28.1 yards with a long return of 92 yards. Coastal Carolina: Carried the ball 12 times for 67 yards in the Jayhawks’ season opener … at Baylor: Gained 76 yards on 14 carries and scored two touchdowns against the Bears … Also caught three passes for 24 yards to give him an even 100 all-purpose yards for the game … In the first quarter, reached the end zone on a 21-yard carry, which marked the 11th rushing touchdown of his career, with his last four touchdowns coming on the road … In the fourth quarter, again found the end zone on a 16-yard rush … The touchdown was his second of the game, tying a career high and marking the junior’s fourth-career game with two touchdowns in a game … Oklahoma State: Carried the ball 14 times for a total of 32 yards against the Cowboys … Returned six kickoffs for 105 yards, with a long return of 31 yards … Led KU in all-purpose yardage for the game with 137 yards … at West Virginia: Returned a kickoff 92 yards for a touchdown in the fourth quarter … Carried the ball 11 times for the Jayhawks, gaining 21 yards … Also caught three passes from Miles Kendrick for seven yards … Accumulated 120 all-purpose yards on the afternoon to lead the team.

2018 (Fr.): Rushed for a total of 1,125 yards on 161 carries, good for 102.3 yards per game, 7.0 yards per carry and seven rushing touchdowns … Added 289 yards and two scores on 33 receptions and 246 yards on 11 kick returns to lead the Big 12 and rank sixth in the FBS in all-purpose yards at 150.9 per game … One of two players in the Big 12 Conference to record a 100-yard rushing game (4) and a 100-yard receiving game (1) joining TCU’s Jalen Reagor … Also one of only two players in the league to score a touchdown by way of passing, rushing and receiving in 2018 joining Texas’ Lil’ Jordan Humphrey … One of just three true freshman in Big 12 history to accomplish the feat … His 1,125 rushing yards tie him for eighth place in KU’s single-season history books, ranking him second among Jayhawk freshmen on that list … His 16.8 yards per carry against Oklahoma was both a Big 12 Conference and Kansas record for a game with a minimum of 15 carries … His 1,660 all-purpose yards rank third on KU’s single-season list … Tabbed the Big 12 Conference’s Newcomer of the Week on four occasions during the 2018 season … One of just two Jayhawk running backs to be tabbed All-Big 12 First Team, joining Jon Cornish (2006) … Also one of just two Kansas returners to earn All-Big 12 First Team accolades, joining Charles Gordon (2005) … at Central Michigan: Made his collegiate debut with a start at running back … Ran for 125 yards and two touchdowns on 14 carries … Also caught one pass for eight yards … Named Big 12 Newcomer of the Week for his efforts … Rutgers: Became the first freshman in KU history to open their career with back-to-back 100-yard rushing games after collecting 158 yards and one TD on 18 carries against the Scarlet Knights … Recorded a then-career-long 52-yard scoring run … Added one reception for five yards … at Baylor: Ran for 89 yards, including a career-long rush of 72 yards … Caught one pass for five yards … Oklahoma State: Rushed for 97 yards and a score on 17 carries … His touchdown run of 60 yards marked his longest scoring rush of his career … Recorded six receptions for 60 yards … at West Virginia: Carried the ball 12 times for 65 yards … Caught three passes for 16 yards … at Texas Tech: Rushed for 81 yards and caught three balls for 26 yards … TCU: Scored two touchdowns off 102 yards receiving on seven receptions … Rushed for 33 yards … Iowa State: Ran the ball 17 times for 58 yards … Reeled in six receptions for 42 yards … at Kansas State: Ran the ball 14 times for 59 yards in his first Sunflower Showdown … at Oklahoma: Earned Big 12 Newcomer of the Week after rushing for 252 yards and two touchdowns, a KU freshman record and sixth all-time in Kansas football history … Had 18 yards receiving on three receptions … Threw his first pass of the season, completing a nine-yard touchdown to Jeremiah Booker … Texas: Rushed for 113 yards on 10 attempts to complete a record-setting freshman season.

High School: Touted as a four-star recruit and the 15th-best player in the state of Louisiana according to ESPN.com … Rated a three-star recruit, the 11th-best all-purpose back in the country and the 16th-rated player in the state of Louisiana by Rivals.com … Also a three-star player according to 247Sports.com … Played for head coach Dominic Saltaformaggio at Hahnville HS … Led HHS to the Louisiana Class 5A state title game in 2017, rushing for 210 yards and a touchdown, against Zachary HS … Registered 3,118 rushing yards with 37 touchdowns as a senior … Collected nearly 1,400 yards and 14 scores in Hahnville’s five-game playoff run … Selected as the Louisiana Farm Bureau Insurance/Louisiana Sports Writers Association Mr. Football for the 2017 season … Named New Orleans Metro Player of the Year by the Greater New Orleans Sports Foundation Quarterback Club … Earned a spot on the New Orleans Times-Picayune 2017-18 All-Metro Top 25 Male Athletes of the Year list.