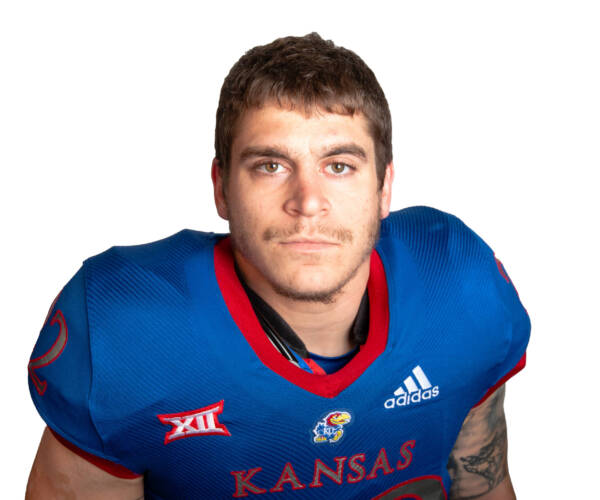 2020 (So.): Played in the last seven of KU’s nine games on the season … Made two solo tackles … Also carried the ball twice for a total of four yards gained on the ground. Oklahoma State: Played against the Cowboys, his first appearance of the season, but did not record any stats … at West Virginia: Saw time on special teams for the Jayhawks in Morgantown … Did not record any statistics … at Kansas State: Appeared in his third-straight game for the Jayhawks in the annual Dillons Sunflower Showdown … Iowa State: Has now played in four of KU’s six games on the season … at Oklahoma: Played against the Sooners, but did not record any stats on the afternoon … TCU: Has now played in the last six-straight games after not playing in the first two games of the season … Carried the ball twice for the Jayhawks, gaining a total of four yards on the ground … at Texas Tech: Made a solo tackle against the Red Raiders while playing in his seventh game of the season for KU.

Started at running back for two years at Somerville High School … Senior year recorded 682 yards on the ground on 93 attempts … Also added six touchdowns in the 2018-2019 season … Ran for 980 yards and punched in eight touchdowns his junior year … Proved to be valuable in the passing game his junior year, catching 32 passes for 283 yards and a touchdown.