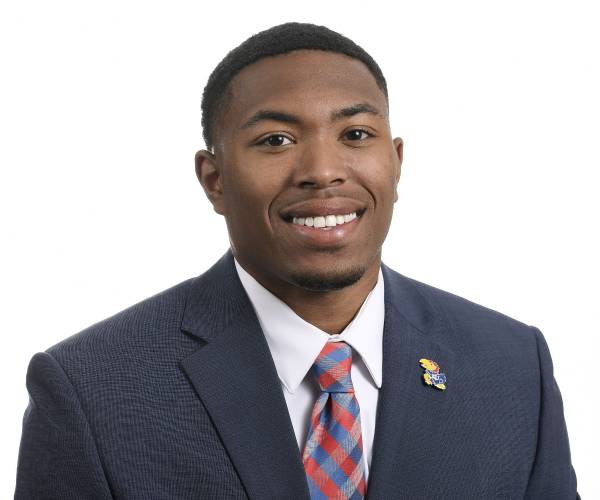 2019 (Sr.): Appeared in four games throughout the season without recording any statistics. Indiana State: Saw action but did not record any stats … Coastal Carolina: Saw playing time vs. the Chanticleers … at Boston College: Did not record any statistics in his time on the field for the Jayhawks in Chestnut Hill … Texas Tech: Made his fourth appearance of the season in KU’s 37-34 Homecoming win over the Red Raiders.

2017 (So.): Saw action in six games, starting four games at safety … Recorded starts against Kansas State, Texas, Oklahoma and Oklahoma State … Credited with 19 total tackles and 2.0 TFLs … at TCU: Recorded four solo tackles … Baylor: Had three solo tackles … Added one TFL for a loss of six yards … at Texas: Tallied two tackles, one solo … Oklahoma: Recorded a career-high six tackles, five of them solo, to go along with 1.0 TFL … at Oklahoma State: Had three total tackles, including two solos, against the Cowboys.

2016 (RFr.): Provided depth at safety and on special teams in seven games … Credited with eight tackles … Stopped a fourth-down play in the backfield for his first TFL at West Virginia … Also credited with a personal-best three tackles against the Mountaineers … Rhode Island: Contributed one tackle in his KU debut … TCU: Recorded the second tackle of his career … at Baylor: Saw extended playing time and posted one tackle … at West Virginia: Turned in the best game of his career after collecting three tackles … Also notched his first tackle behind the line-of-scrimmage on a fourth-down play at KU’s 1-yard line … Texas: Notched one tackle in the victory over the Longhorns … at K-State: Posted one solo tackle against the Wildcats.

High School: Received three-star recognition by both Rivals and 247Sports.com … Named first-team all-district in 2014 after collecting 14 tackles, one interception, three pass breakups, two fumble recoveries that he ran back for touchdowns and one forced fumble … Played for head coach James Brown … Chose Kansas over offers from Louisville, New Mexico, SMU and UTEP.