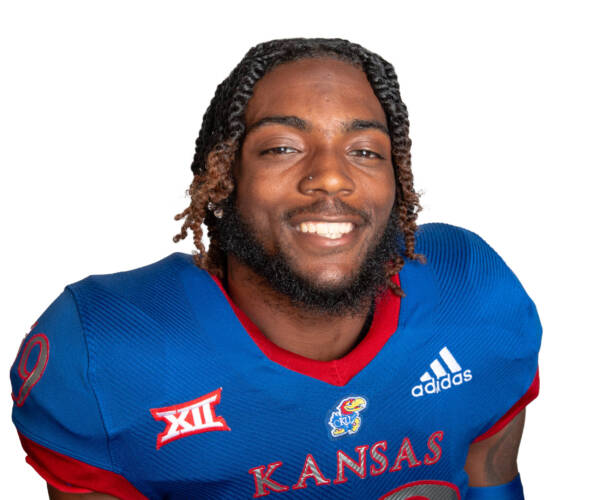 2021 (So.): Saw action for the Jayhawks in all 12 games …Finished the season with 15 catches for 88 yards… South Dakota: Started at wideout in the season opener against South Dakota and caught two passes for eight yards … Texas Tech: Hauled in two catches for 20 yards with a long reception of 15 yards…Also had one rush for three yards…Oklahoma: Set career highs in catches (three) and yards (22)…at TCU: Had an 11-yard reception against the Horned Frogs.

2020 (Fr.): Played in six games throughout the season, earning a start in the season finale vs. TTU … Caught four passes in those six games, good for 17 yards total, or an average of 4.2 yards per catch. Oklahoma State: Made his Kansas debut against the Cowboys but did not record any stats … at West Virginia: Saw playing time in Morgantown, did not record any statistics … at Kansas State: Hauled in three receptions for 17 yards, with a long catch of the day being seven yards … His previous career high was one catch at West Virginia in the last game … Iowa State: Played in his fourth-straight game against the Cyclones … Did not record any stats on the afternoon … at Oklahoma: Made his fifth appearance of the season in Norman without recording any statistics … at Texas Tech: Earned his first start of the season (at WR) in Lubbock … Joined the group of 11 true freshmen to have started at least one game throughout the season … Did not record any stats on the afternoon.

High School: Rated a three star prospect by Rivals, 247 Sports and ESPN … Played for head coach Darnell Lee at East Ascension HS … The No. 52-ranked player in the state of Louisiana according to 247 Sports … Recorded 46 catches for 984 yards and 12 touchdowns in 2019 … Named to the 5-5A All-District First Team following his senior season … Also earned All-Metro First Team honors in 2019 … Had 566 receiving yards and seven total touchdowns in his junior season … Took home 5-5A All-District and All-Metro First Team honors in 2018 … Also lettered in basketball and track & field, where he was a Louisiana state qualifier in the long jump … Took home all-district and all-region honors in the long jump in 2019.

Personal: Son of Dana McBride and Steven Blaine … Has two siblings; a sister, Salayiah, and a brother, Ja’Kye … Plans to major in mechanical engineering … Cousin, Tramon Williams, plays cornerback for the Green Bay Packers … Selected Kansas over Wake Forest and Louisiana Tech, among others.