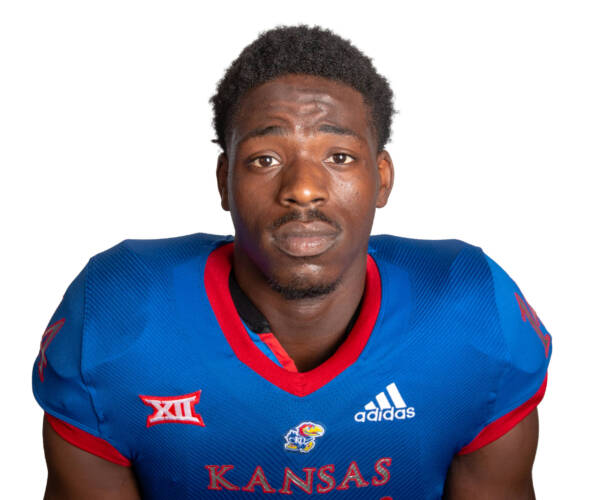 2020 (RFr.): Saw playing time in all nine of KU’s games this season … Earned starts twice, vs. CCU and at KSU … In a three-way tie for sixth amongst the Jayhawks with 27 total tackles on the season (20 solo, seven assisted) … Recorded 3.0 tackles-for-loss (of four yards) and hurried the opposing team’s quarterback on a single occasion. Coastal Carolina: Started his first-career game at linebacker in the Jayhawks’ season opener … at Baylor: Assisted on two tackles against the Bears, his first stats of the season … Oklahoma State: Collected four total tackles (two solo, two assisted) against the Cowboys, doubling his previous career best … at West Virginia: Made his fourth appearance of the season and recorded a solo tackle against the Mountaineers … at Kansas State: Recorded the first tackle-for-loss of his Kansas career during the Dillons Sunflower Showdown … Set a new career high with five tackles, with his previous high of four came against Oklahoma State earlier this season … Also had a quarterback hurry against the Wildcats … Iowa State: Recorded another TFL against the Cyclones in addition to making three solo tackles on the afternoon … at Oklahoma: Matched his season and career-best five tackles (initially set at K-State, 10/24) as well as TFLs, with 1.0 for the third-consecutive game … TCU: Totaled three tackles against the Horned Frogs, two of the solo variety and one assisted … at Texas Tech: Recorded four solo tackles against the Red Raiders … Saw playing time in each of the team’s nine games this season.

2019 (Fr.): Played in four games as a true freshman for the Jayhawks … Tallied two tackles on the season, one each of the solo and assisted variety … Also credited with a quarterback hurry during the year. at Boston College: Made his Jayhawk debut in Chestnut Hill … Assisted on one tackle to make his way onto the stat sheet … at TCU: Saw playing time, but did not record any statistics in Fort Worth … Oklahoma: Made a solo tackle against the Sooners, as well as causing one quarterback hurry, both of which were season/career highs for the freshman … Baylor: Played against the nationally ranked Bears, but did not record any statistics in his fourth game of the season for KU.

High School: Earned a four star rating by 247Sports.com and Rivals.com ranking in the top 400 … Rated top 20 at his position in the country … Played for head coach Jason Todd at South Oak Cliff HS … Totaled 100 tackles, including 20 sacks and 26 tackles-for-loss … Helped lead South Oak Cliff to a 11-1 record … Earned Texas 6-5A Player of the Year and District 5-A Defensive Player of the Year honors his senior season … Rated No. 36 in the Dallas Morning News Top 100 rankings … Earned District 11-5A Defensive MVP honors as a junior.