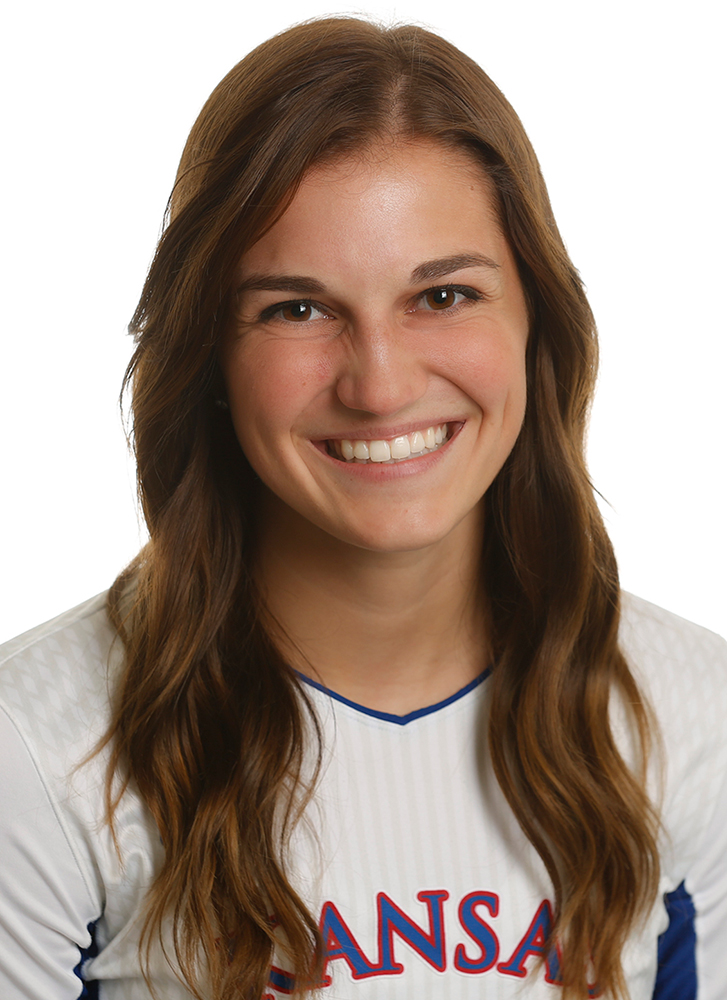 OVERVIEW
• Enters senior campaign as a four-year starter and back-to-back All-Big 12 First Team honoree.
• Named the 2015-16 Big 12 Female Sportsperson of the Year for her work on the court, in the classroom, and in the community.
• Currently holds the Kansas record for blocks per set (1.27) and ranks second in career hitting percentage with a .341 clip entering the 2016 season.

2015 (JUNIOR)
• One of the keystones to an unprecedented season, helping guide Kansas to a 30-3 record, No. 4 ranking, and first-ever appearance in the NCAA Championship semifinals.
• Started in all 33 matches and all 113 sets for the Jayhawks.
• Ranked third in the Big 12 in blocks per set (1.23) and sixth in hitting percentage (.354) … Totaled six matches with double-figure kills and 11 matches with five or more blocks.
• Accounted for a season-high 19.5 points at Arkansas (Aug. 29) with 15 kills on a .467 hitting clip and eight blocks.
• Rejected nine attacks at Wyoming (Sept. 11) to set regular-season high in blocks in just three sets.
• Recorded 11 kills with five blocks in the Big 12 opener against Kansas State (Sept. 23).
• Went for eight kills on 17 errorless swings with six blocks at Baylor (Oct. 14).
• Posted 10 kills on a .429 attacking clip in four sets at Oklahoma (Nov. 7).
• Nearly unstoppable offensively against No. 4 Texas (Nov. 11), recording 16 kills on 23 swings for a .652 hitting percentage in the narrow five-set loss.
• Recorded a season-high 12 blocks in the NCAA Championship San Diego Regional Semifinal against LMU (Dec. 11).
• Helped upset No. 1 USC (Dec. 12) in the NCAA Championship San Diego Regional Final with 10 kills on 24 errorless swings for a .417 hitting percentage, and two blocks.
• Registered four kills and four blocks in the NCAA Championship semifinals against No. 4 Nebraska (Dec. 17).

2014 (SOPHOMORE)
• Started 23 matches at middle blocker for the Jayhawks, working her way back from an early season injury.
• KU’s match leader in blocks 17 times … Finished the season with 181 kills and 126 blocks.
• Her 1.40 blocks per set were a Kansas 25-point rally scoring era record and led the Big 12.
• Opened the first match of the season against Utah Valley (Aug. 29) by hitting for eight kills and two aces, while rejecting a team-best four blocks.
• Blocked 10 Wildcat attack attempts against Villanova (Sept. 12).
• Cracked out nine kills while setting a career-best in hitting percentage (.692) during KU’s three-set sweep over Yale (Sept. 12).
• Reached double-digit kills for the first time on the season (11) and dug-out six Mountaineer attacks to set a new career high during KU’s four-set road win at West Virginia (Oct. 15).
• Reached a new career best in total kills (16), while hitting .652 and serving a pair of aces in a sweep of TCU (Oct. 18).
• Tied her season best in aces (2) in a win at No. 23 Kansas State (Nov. 12).
• Struck nine kills on 15 swings for a .600 attack percentage to go along with six blocks in the Jayhawks’ sweep over West Virginia (Nov. 26).
• Rejected a season-high 13 blocks on Senior Day as Kansas ended the regular season by dropping Oklahoma (Nov. 29) in five sets … Her 13 blocks were a Horejsi Family Athletics Center record.

2013 (FRESHMAN)
• Started 29 matches and saw time in 31 at middle blocker during her freshman campaign.
• Finished the season with 232 kills and 135 blocks, the freshman record for blocks in a season … Only player in Kansas history to record over 230 kills and 130 blocks in their first year of play.
• On the season, Soucie recorded team highs in hitting percentage (.339) and blocks-per-set (1.19) … Soucie’s 135 total blocks were second most on the team and good for fifth best in the Big 12 … First player to hit over .300 in their first year (min. 500 attempts).
• Struck 10 or more kills in nine of 31 matches … Had a five-match streak of hitting for more than 10 kills and recording a hitting percentage over .330 … Secured an attack percentage over .300 16 times on the year and eclipsed the .500 and .600 mark a combined seven times… Blocked more than one opponent attack in 27 matches on the year.
• Earned her first career start against UMKC (Sept. 3) and had a season-high three digs … Went on to start 28-straight matches after that point.
• Broke-out for seven kills and seven blocks in KU’s five-set win at Arkansas (Sept. 5).
• Notched her first double-digit kill performance with 12 kills and a .435 attack percentage to go along with four blocks in the Jayhawks’ home loss to Arkansas (Sept. 7).
• Rejected a season-high 12 Bluejay kill attempts at No. 24 Creighton (Sept. 10).
• Recorded her first error-free performance after hitting .588 and smashing 10 kills on 17 attempts in KU’s four set win over Notre Dame (Sept. 22).
• Swatted nine attacks from the Lady Bears during the Jayhawks’ win in Waco, Texas (Oct. 5).
• Struck 10 or more kills in five-straight matches, highlighted by a 12 kill, error-free match at TCU (Nov. 2).
• Swung for a season-high attack percentage (.600) in KU’s sweep of West Virginia (Nov. 6).
• Stole the show on KU’s Senior Day with a team and career-high 13 kills to go along with six blocks during the Jayhawks’ win over Texas Tech (Nov. 23).
• Responded with 12 more kills and two blocks to propel KU over Denver (Nov. 26) in Allen Fieldhouse.
• Posted a team-high five blocks to help the Jayhawks down Creighton (Dec. 7) in the second round of the NCAA Championship.
• Recorded a team-high three blocks against a potent Husky attack in KU’s regional semifinal loss to No. 5 Washington (Dec. 13).

HIGH SCHOOL
• Four-year letterwinner in volleyball, track and basketball at Osawatomie High School in Osawatomie, Kansas … Although also coached by Jennifer Waggoner, Soucie played high school volleyball for her dad, head coach Darren Soucie.
• As a senior in 2012, named the Tri-County Spotlight Player of the Year, All-League First Team, All-State Second Team and All-Metro Second Team … Led the country with 779 kills during her senior season … Posted 138 solo blocks and a .572 attack percentage, while leading her team to a runner-up finish in the Sub-State Championship.
• Her junior year (2011) provided an explosive stepping stone to ramp up to her senior campaign as she rolled out 443 kills and 80 solo blocks en route to collecting All-Tri County First Team and All-League First Team honors, which she also earned as a sophomore.
• As a freshman in 2010, earned All-League Honorable Mention honors.
• Two-time Tri-Country Track Athlete of the Year and was the 2011 4A State Champion in the 100-meter hurdles (sophomore) and the runner-up in the same event in 2012 (junior).
• In basketball, was named All-League First Team, All-Tri County First Team and All-State Honorable Mention in her sophomore and junior seasons and holds the career blocks and career rebounds record at OHS.
• Named an academic all-state volleyball honoree, a Kansas Scholar and a member of the Kansas Honors Program.

ACADEMICS
• Majoring in exercise science in the School of Education while on a pre-med tract at The University of Kansas.

PERSONAL
• Born in Holdrege, Nebraska.
• Daughter of Darren and Annette Soucie … Sister to Jordan, Brendan and Morgan.
• Father, Darren, played basketball for the University of Nebraska at Kearney and also coached Tayler in volleyball at Osawatomie High School … Brother, Brendan, was a distance runner on the KU track and field team from 2010-14.