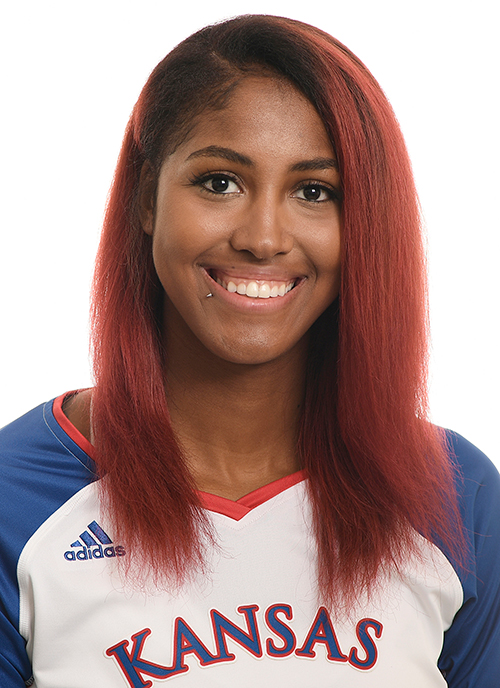 Transferred to Kansas after graduating in three years from Ole Miss … Poised to make an immediate impact on KU’s front line of middle blockers … Coming off a 100-block season at Ole Miss in 2016.

• Started in 11 of 13 nonconference matches.
• Made her debut as a Jayhawk as a starter at NC State (Aug. 25), recording six kills and three blocks during KU’s season-opening win.
• Posted seven kills and seven blocks for 11.5 points in four sets against Missouri State (Aug. 26).
• Recorded eight kills and seven blocks in a five-set victory at NC State (Aug. 26).
• Posted six kills on a .417 hitting percentage with two blocks in two sets during KU’s win over No. 13 Kentucky.
• Registered eight kills during KU’s four-set win over No. 17 Purdue (Sept. 8).
• Poured in nine kills with three blocks in just three sets against No. 9 Creighton (Sept. 9).
• Notched a season-high eight blocks and reached double-figure kills (10) for the first time as a Jayhawk in five sets at Santa Clara (Sept. 15) … Also served for the first time in a KU jersey against the Broncos, recording an ace in seven attempts.
• Recorded 10 kills on a .471 hitting percentage with four blocks against Idaho (Sept. 16).

• Started all 31 matches during her junior year at Ole Miss … Ranked second on the team and 11th in the SEC with a .339 hitting percentage.
• Finished with 115 total blocks, which ranks fourth in a single season at Ole Miss … Moved into 10th all-time at Ole Miss with 175 career blocks … Tallied 89 block assists which ranks fourth in a single season at Ole Miss … Her 26 solo blocks tied for third best in a single season.
• Notched a career-high 10 blocks at Mississippi State (Nov. 16), which tied for third best in a match in school history.
• Named MVP of the Scenic City Showdown (Sept. 16-17) … Averaged 3.91 kills and hit .507 in three matches to lead the Rebels to their 11th nonconference tournament title in the last 12 … Averaged 1.73 blocks per set and finished the weekend with 5.32 points per set.
• Recorded a season-high 17 kills against Chattanooga (Sept. 17) on a .438 clip … Also had six blocks and three service aces for 23.5 points.
• Named to the Lipscomb Invitational (Sept. 9-10) All-Tournament Team and the Rebel Classic All-Tournament Team.

• Saw limited playing in 13 matches and 24 sets … Totaled 13 kills, eight blocks and 10 digs on the season.
• Recorded a season-high two blocks three times – at NC State (Sept. 4), against Buffalo (Sept. 11) and against Texas A&M (Nov. 13).
• Started the last two matches of the season at Alabama (Nov. 25) and at Mississippi State (Nov. 27) … Recorded a season-high five kills against Alabama.

• Played in 21 matches with 18 starts during freshman season at Ole Mess … Helped lead the Rebels to the most wins since the 2007 season … Averaged 1.33 kills per set and 0.71 blocks per set.
• Came off the bench to record her first collegiate kill and block against Jackson State (Sept. 20), finishing with one kill and four blocks in a four-set victory.
• First collegiate start came at South Carolina (Sept. 26), recording nine kills and four blocks in a narrow five-set loss … Remained a starter for the rest of the season for the Rebels.
• Totaled 11 kills and six blocks to help lead the Rebels to road wins at Auburn (Oct. 17) and Alabama (Oct. 19).
• Named the SEC Freshman of the Week on Oct. 6 after registering a season-high eight blocks in a three-set road win at Missouri (Oct. 1) … Four of her eight blocks came in the second set with the Rebels trailing 22-16 … The Ole Miss win snapped Missouri’s 20-match SEC win streak.

• Attended Breaux Bridge High School in Breaux Bridge, Louisiana.
• Nominated for the Louisiana Gatorade Player of the Year award … Three-time first-team all-district selection … Named the district’s MVP as a senior … Tabbed first team all-state as a junior and helped guide her team to a district championship as a senior.