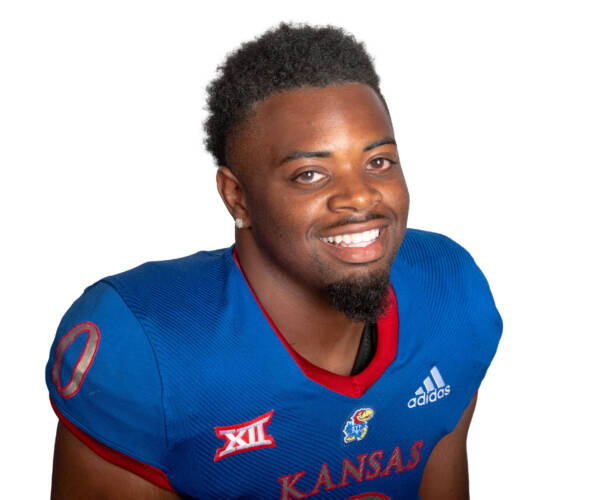 2020 (So.): Played in the team’s first six games of the season, earning two starts: at Baylor and vs. ISU … KU’s leading rusher, gaining 325 net yards on 72 attempts, good for an average of 4.5 yards per carry … Scored two rushing TDs on the season … Season-long carry was 61 yards and his average yards per game came in at 54.2 … Also caught six passes for a gain of 18 yards. Coastal Carolina: Broke off a career-long 61-yard touchdown in the season-opener … The touchdown was the third of his career and also the longest rush of his career … With the run, he surpassed his career high in rushing yards with 81 … His previous high of 61 yards was set at TCU in 2019 … at Baylor: Set a new career high when he carried the ball 14 times against the Bears, accumulating 70 yards … His previous best came against Coastal Carolina in the season opener, rushing 11 times for 81 yards and one touchdown … Oklahoma State: Gained 31 yards on 11 carries and scored a touchdown against the Cowboys … Also caught a pass for a gain of five yards … at West Virginia: Rushed the ball 11 times at WVU for 43 yards on the ground … Also caught one pass for three yards, bringing his all-purpose yard total for the afternoon to 46 yards … at Kansas State: The leading rusher for Kansas on the afternoon in Manhattan, accumulating 72 yards … Carried the ball 16 times for the Jayhawks, a new career best, surpassing his 14 rushes earlier this season at Baylor … Iowa State: Gained 28 yards on the ground vs. the Cyclones on nine carries … His long rush of the day was for 21 yards.

2019 (Fr.): Saw playing time in 10 of KU’s 12 games of the season, earning one start against TTU … Carried the ball 26 times for a total of 138 yards and two touchdowns … His long rush of the year was good for 45 yards and he averaged 5.3 yards per rush … Through the air, caught six passes for 24 yards, with a long reception of 11 yards … Also made two solo tackles on the season. Indiana State: Saw action in the season opener in his Jayhawk debut … Recorded two receptions for three yards … Coastal Carolina: Caught one pass from quarterback Carter Stanley for a total of two yards … at TCU: Had a breakout day at running back for the Jayhawks against the Horned Frogs … Carried the ball four times for a total of 61 yards, with a long rush of 45 yards and one touchdown … Also caught one pass for a gain of 11 yards, a new career-long reception … Oklahoma: Gained five yards on three carries, with a long of four yards, against the Sooners … at Texas: Carried the ball once vs. the Longhorns … Matched his season and career high with two receptions … Totaled eight yards through the air on the evening, with a long catch of five yards …Texas Tech: Made the first start of his collegiate career at running back … Scored his second rushing touchdown of the season … Rushed the ball a total of three times for 36 yards, with a long rush of 32 yards, which he carried into the end zone … Recorded his first tackle as a Jayhawk against the Red Raiders in KU’s Homecoming victory … Kansas State: Gained 16 yards on three carries, with a long rush of 10 yards, against the Wildcats …at Oklahoma State:Ran the ball three times for the Jayhawks while in Stillwater … Gained a total of 10 yards against the nationally ranked Cowboys, with a long rush of six yards … at Iowa State: Carried the ball five times for KU in Ames, a new season and career high … Baylor: Gained six net yards on four carries against the Bears … Also made a solo tackle on the afternoon, tying his season and career highs.

High School: Rated a three-star recruit by 247Sports.com and Rivals.com … Played for head coach Herman Johnson at Skyline HS … As a senior, completed 65.1 percent of his passes for 2,459 yards and 26 touchdowns, while leading the team with 842 rushing yards and 14 scores … Named Offensive Most Valuable Player of the Blue-Grey All-American Bowl … Had over 3,000 total yards with 30 touchdowns his junior season … Rated No. 31 in the Dallas Morning News Top 100 rankings … Also lettered in track & field.