“The prospect of a spring racing season is extremely exciting for the women, who had that opportunity taken away last year due to COVID, and those that have yet to have an opportunity to wear a Jayhawks uniform,” said head coach Carrie Cook-Callen. “This team has been working hard and we are eager to get back to racing.”

Kansas opens the season with an exhibition against Tulsa in Catoosa, Oklahoma March 6 before its first regular season race against Oklahoma in Oklahoma City March 27.

May 1 marks the annual Dillons Sunflower Showdown against Kansas State, hosted by the Jayhawks at Wyandotte County Lake in Kansas City, Kansas. Race day concludes with a dual against Drake in the afternoon.

Kansas heads to Austin, Texas to compete in the Big 12 Championships May 16 before concluding the season at the NCAA Championships in Sarasota May 28-30. 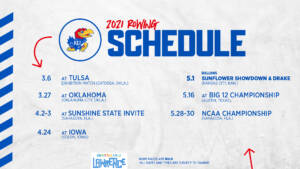