LAWRENCE, Kan. – The Kansas women’s basketball team, like so many others, endured a year full of challenges like: hybrid class schedules, necessary precautions, testing protocols, and so much more. In a year where the health and safety of student-athletes, coaches, staff and the community were at the forefront of every decision, these young women persevered through uncharted territory to complete a 25-game schedule.

A Look Back at Last Season

March 11, 2020 is a day that will live on in infamy for not only the sports community but for the world. On that date, the Kansas women’s basketball team was preparing to make its 24th appearance in the Phillips 66 Big 12 Championship Championship. The Jayhawks were the No. 10 seed and set to face the No. 7 seeded Lady Raiders of Texas Tech. The tournament, and the possibility for an NCAA postseason berth, were canceled due to the COVID-19 pandemic.

"Our players were excited about the opportunity to compete in the Big 12 Tournament. However, in light of all the information that has become available in the past 24 hours, we understand canceling was the appropriate response. The health and safety of our players will always be priority number one."

The 2020-21 season will remain a year that will need no explanation but also serve as a year where the Jayhawks made a conscious effort to learn and grow. Here are 10 things that were learned about the Jayhawks this season (click the photos to be taken directly to the article):

After coming together for a routine practice day, the women’s basketball team felt the need to have a conversation about the injustices seen on national television and across the nation. The Jayhawks discussed holding a peaceful march and coordinated with the necessary campus offices to bring the community together for this forum. The team took it a step further and applied patches to their uniforms in support of the Black Lives Matter Movement. 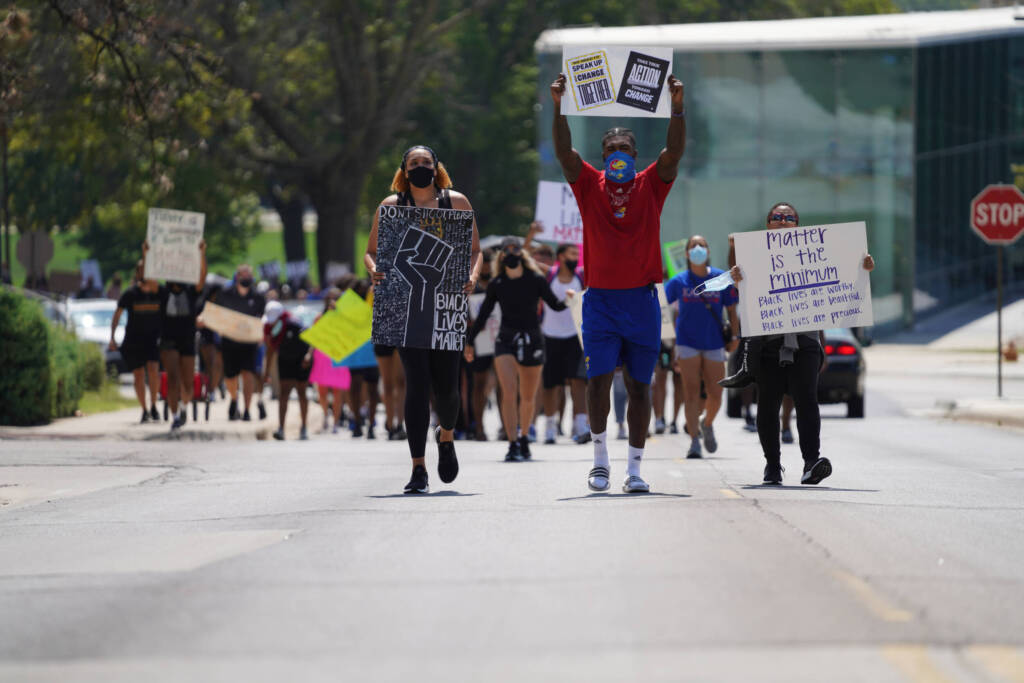 The sophomore duo of Zakiyah Franklin and Holly Kersgieter earned honorable mention status as a part of the 2020-21 Big 12 Conference Women’s Basketball Preseason Awards back on October 21, 2020.

The Jayhawks enjoyed a four-year opening-game winning streak inside of Allen Fieldhouse. After defeating Northern Colorado 78-62 back on November 25, 2020, the Kansas women’s basketball team secured its fourth consecutive home opening victory. The streak began back on Nov. 12, 2017 with a 66-48 win over Campbell, next was on Nov. 7 with a 67-55 victory over UMKC and last season’s 84-72 defeat of Indiana State on Nov. 7. 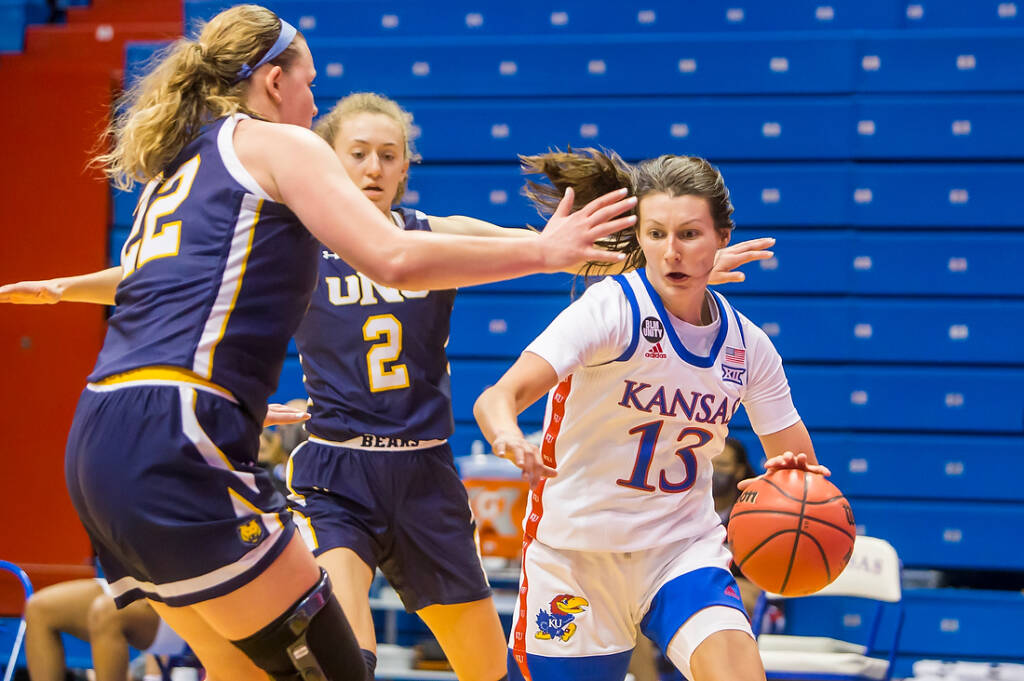 In a momentum shifting win, Kansas notched a 100-point outing in a victory over Oral Roberts, keeping the Golden Eagles to only 59 points on December 6, 2020. The Jayhawks came alive in the second quarter, as they dominated with a 30-0 run and allowed Oral Roberts only three points in the quarter. The game ranks 34th in the record book for KU Women’s Basketball 100+ point games and was the first time since Dec. 12, 2013, vs Texas Southern. It’s also the first 100-point game in the Brandon Schneider era.

The freshman phenom, Ioanna Chatzileonti was named the Big 12 Conference Freshman of the Week (FOW) in back-to-back weeks. The honor is the first consecutive nod for Kansas since the inceptions of the accolade in 2009. It is the eighth all-time FOW honor for Kansas, with Brandon Schneider at the helm for three of those honors in Holly Kersgieter (2019) and Chatzileonti (Nov. 30 and Dec. 7). Chatzileonti is the first KU international player to receive FOW and to be selected twice.

Freshman Mia Vuksic tied the school record for three-pointers made in a game with eight against Kansas State on February 13. Vuksic, a freshman from Sibenik, Croatia, finished 8-of-14 from deep to finish with a career-high 24 points. The eight makes from long distance tie Charisse Sampson (1996) for the school record. The 14 attempts also tied a school record. 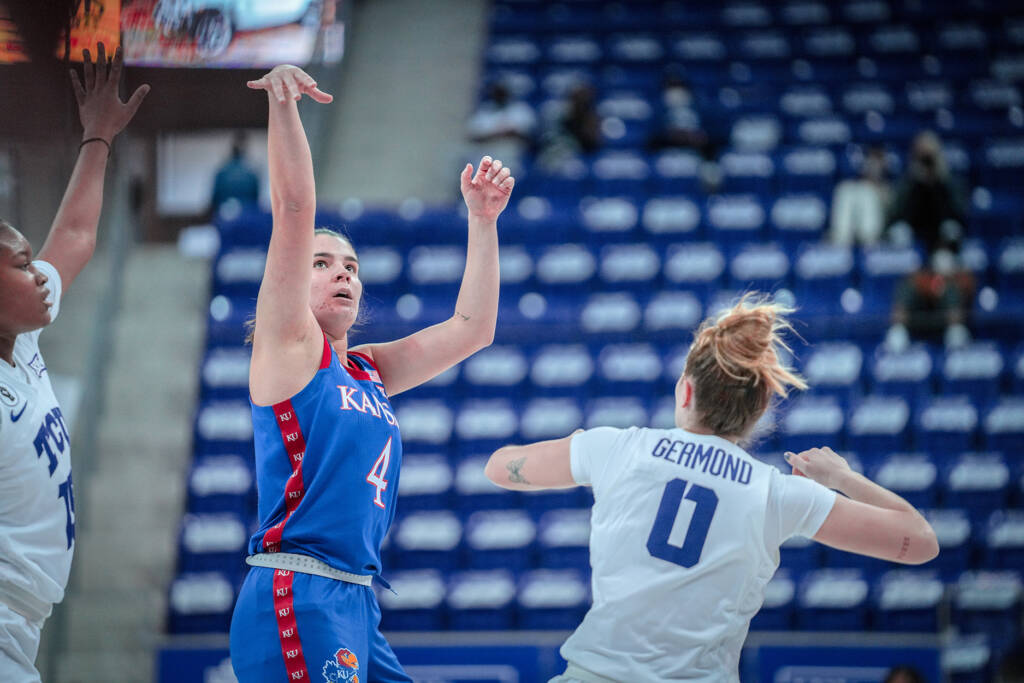 8. Putting the STUDENT in Student-Athlete

Five student-athletes from the Kansas women’s basketball team garnered recognition on the Academic All-Big 12 Teams, with three on the first team and a pair on the second team. First Team selections include Chandler Prater, Aniya Thomas and Holly Kersgieter. Prater is a redshirt-freshman majoring in communications studies and has earned the first conference honor of her career. Thomas also majors in communications studies and is now a two-time academic all-conference honoree. Kersgieter is a sophomore and majors in business administration. The second team is highlighted by Brooklyn Mitchell and Zakiyah Franklin. Mitchell is now a two-time selection to the Academic All-Big 12, majoring in sports management. Franklin is a sophomore who is also a sports management major. 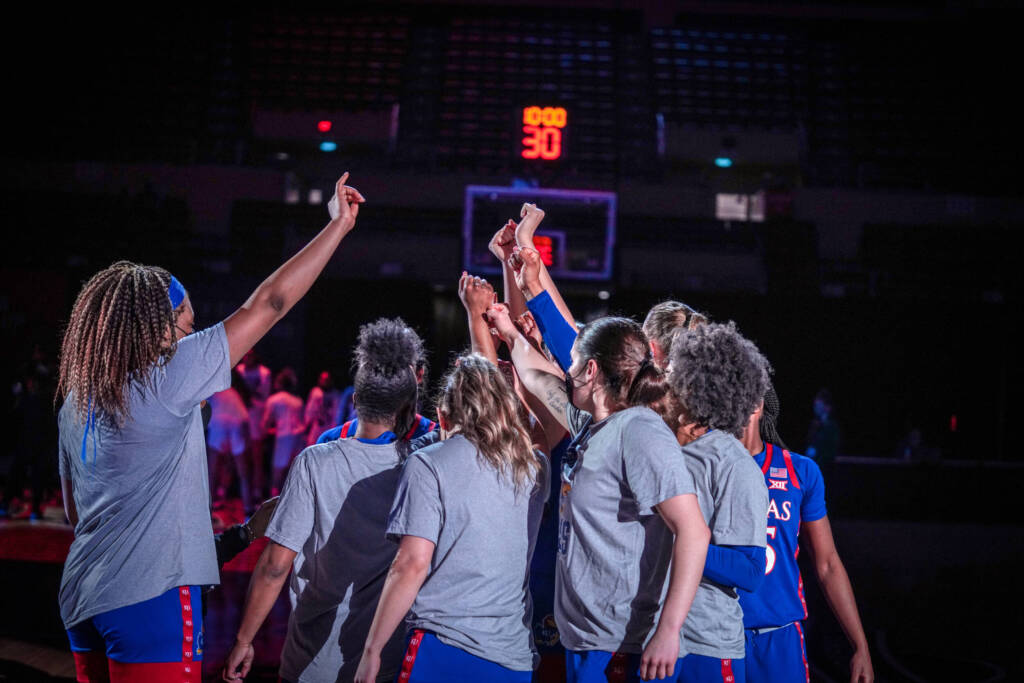 The Kansas women’s basketball team concluded the 2020-21 season ranked in the top-100 in nine categories by the NCAA across all of Division I women’s basketball teams. The Jayhawks were 26th in free throws made, 39th in free throw attempts, 47th in blocked shots and 47th in free-throw percentage. Kansas also ranked 69th in blocked shots per game, 73rd in rebounds, 80th in three-point field goals attempted, 84th in scoring offense and 94th in three-point field goals made.

10. The Future is Bright

Back on November 17, 2020, head coach Brandon Schneider announced the signing of three recruits. “We’re super excited to announce our 2021 class,” he stated last fall. “We’ve added two front-line players, as well as another big shooting guard. All three of these signees possess high-level international experience, good size and skill level at their positions and exceptional basketball IQ’s. As a staff, we feel these young women fit our culture and vision for the program perfectly.” Danai Papadopoulou is a 6-4 center from Thessaloniki, Greece who joins Sanna Ström a 5-11 guard from Luleå, Sweden and Matea Nikolic a 6-4 forward from Skopje, North Macedonia.