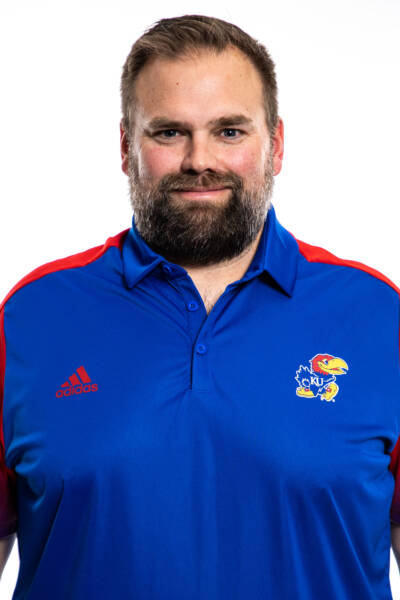 Andy Kotelnicki joined Lance Leipold’s staff in May 2021 as the offensive coordinator. Kotelnicki came to Kansas after seven seasons at Buffalo. Since 2018, Buffalo’s offense ranked high nationally and broke many school records.

Despite a shortened season in 2020 due to the COVID-19 pandemic, the Buffalo offense still posted historic numbers while going 6-1. The Bulls averaged a school-record 478.4 yards of total offense per game and a school-record 287.4 yards per contest rushing. Buffalo ranked second in the nation in rushing offense (287.4) and fifth in the nation in scoring offense at 43.5 points per game.

Also in 2020, Buffalo rushed for 32 touchdowns, four shy of the school record for a single season in only seven games. Bulls All-American running back Jaret Patterson led the nation in rushing, averaging 178.7 yards per game. Against Kent State, the Bulls scored a school-record 70 points. Also against the Flashes, Patterson tied an FBS record with eight rushing touchdowns and rushed for 409 yards, the second most ever in an FBS game. He and Kevin Marks combined to rush for 515 yards, which, at the time, was the most ever by two players in an FBS game.

As a result of Buffalo’s successful 2020 season, Kotelnicki was named one of four finalists for the FootballScoop Offensive Coordinator of the Year Award. He was the only finalist from a non-Power 5 conference.

In 2019, Kotelnicki’s offense rushed for 3,256 yards, shattering the single-season school record. Patterson rushed for a school-record 1,799 yards and 19 touchdowns in 2019 and ranked fifth in the nation in rushing. Fellow Buffalo sophomore Kevin Marks rushed for 1,035 yards – marking the first time in school history UB had two 1,000-yard rushers in the same season.

Buffalo ranked 10th in the nation in rushing offense in 2019. In addition, the Bulls’ 36 rushing touchdowns tied the single-season school record.

Buffalo featured a record-breaking offense in 2018. The Bulls shattered the program record for single-season total offense posting 5,803 yards on the year. Buffalo scored 64 offensive touchdowns in 2018, which was also a school record.

Quarterback Tyree Jackson was named the 2018 MAC Offensive Player of the Year – the first time in school history a Buffalo player won the award. In addition, seven offensive players were named All-MAC in 2018.

In 2015, the Bulls averaged 249.5 passing yards and 136.9 rushing yards per game. Also the quarterbacks coach, Kotelnicki oversaw a passing game that had 283 pass completions – the second most in school history for a single season. The Bulls’ 23.6 completions per game were the most ever at UB.

Prior to Buffalo, Kotelnicki spent two seasons at Wisconsin-Whitewater as offensive coordinator and recruiting coordinator.

At UWW, Kotelnicki led an offense that led the Wisconsin Intercollegiate Athletic Conference (WIAC) in scoring offense (40.1), rushing offense (218.2) and passing offense (269.5) in 2014 en route to a perfect 15-0 season and the programs’ sixth Stagg Bowl national championship in eight seasons.

The Warhawks featured one of the most efficient offensive attacks in the nation under Kotelnicki’s leadership in 2013. Whitewater led the WIAC and ranked among the top five in the nation in first downs (311), interceptions allowed (1) and turnover margin (+2.3).

The Warhawks offense also led the conference in red zone offense, converting scores on 85.9 percent of drives inside the 20-yard line, and set single-season team records in passes completed (312) and passing touchdowns (42) in 2013.

Prior to Whitewater, Kotelnicki served as offensive coordinator at the University of Mary, an NCAA Division II school in Bismarck, N.D., for two seasons. In his first year as coordinator, the Marauders scored over 10 points per game more than the previous season and led the Northern Sun Intercollegiate Conference in scoring offense, total offense and passing efficiency. During his tenure, Kotelnicki mentored nine All-NSIC North Division honorees, the sixth 1,000-yard rusher in the school’s history and an All-America wide receiver.

Kotelnicki spent six seasons as an assistant coach at UW-River Falls, including four as offensive coordinator, in 2003 and from 2006-10. The Falcons set 24 offensive school records during his second stint, and he was promoted to assistant head coach for the 2010 campaign.

Kotelnicki and his wife, Lindsey, have a son, Max, and daughter, Joy.