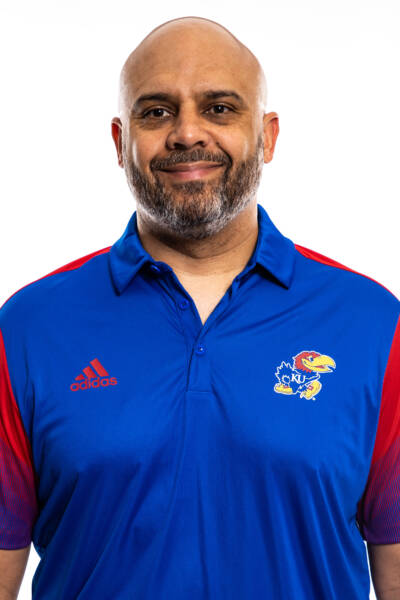 Chris Simpson joined Lance Leipold’s staff at Kansas in May 2021. He will coach linebackers for the Jayhawks.

Simpson came to Kansas from Buffalo where he was on Leipold’s staff for six seasons, also coaching linebackers. In 2020, he was promoted to co-defensive coordinator.

Under Simpson, Buffalo linebackers were one of the most consistent units on the team. At least one linebacker has been named All-MAC in each of Simpson’s six seasons at Buffalo.

In 2020, Buffalo middle linebacker James Patterson was a first-team All-MAC selection after leading the team in tackles and captaining a UB squad that led the MAC in total defense.

In 2019, outside linebacker Kadofi Wright was an All-MAC Third Team selection. Middle linebacker Matt Otwinowski was named Academic All-MAC for the third time in 2019. The Bulls defense finished the season ranked seventh nationally in total defense and fourth nationally in rushing defense.

In 2017, Hodge had one of the finest seasons by a linebacker in school history. The junior middle linebacker had an FBS-era record 154 tackles on the year to lead the MAC and rank second in the nation. Hodge was named All-MAC First Team for his efforts.

In 2016, for the second-straight season, Simpson’s linebackers were the top three leading tacklers on the team. Hodge had a huge season for the Bulls, finishing with 123 tackles, the eighth most in school history for a single season and the second most in Buffalo’s FBS era.

In 2015, Simpson’s first season, the top three tacklers on the team were linebackers and for the first time since 2008, the Bulls had two different players with more than 100 tackles as Nick Gilbo finished with 113 and Brandon Berry had 104. Berry was named All-MAC Second Team and Okezie Alozie was named third-team all-league.

Prior to Buffalo, Simpson was the outside linebackers coach at Eastern Michigan in 2014.

Grand Valley closed the 2013 football campaign ranked third in the final American Football Coaches Association poll. The Lakers advanced to the NCAA DII National Semifinals for the eighth time after knocking off undefeated and No. 3 ranked Colorado State University-Pueblo.

His 2011 linebacking unit was a key component in a Laker defense that ended the year among the GLIAC leaders. GVSU led the league in tackles for loss (93) and sacks (36), while ranking second in scoring defense (20.2). GVSU limited opponents to 15.5 points per game in its last five games that season.

Simpson’s linebacking unit helped the Laker defense rank nationally in several categories, including the top 20 in tackles for loss and sacks in 2010. Ware and Justin Victor earned All-GLIAC accolades during the 2010 campaign.

Simpson arrived at GVSU following a two-year stint at the University of Nebraska-Omaha, where he coached the defensive line. The Mavericks were 14-9 with one appearance in the NCAA DII playoffs during his time on the staff.

Simpson spent five years at Division III national power Wisconsin-Whitewater where he was an assistant coach in charge of the linebackers. UWW was 42-3 his final three seasons with three-straight NCAA DIII National Championship game appearances and three Wisconsin Intercollegiate Athletic Conference crowns. The Warhawks claimed the 2007 National Championship in Leipold’s first year at the school.

In addition, Simpson coached two years (1999-2000) at Waunakee (Wis.) High School, one year (2001) at Loras College in Dubuque, Iowa, as a graduate assistant and one year (2002) at Wisconsin-Platteville. In the summer of 2006, Simpson was selected as a participant at the NCAA Men’s Football Coaches Academy.

He also has received an NFL Minority Coaching Internship on six occasions, from the Green Bay Packers for defensive line and special teams in the summer of 2006, in 2007 with the Dallas Cowboys, in 2008 with the Carolina Panthers, in 2009 with the Minnesota Vikings and Cleveland Browns and in 2013 with the Detroit Lions.

Simpson graduated with a bachelor’s degree from Wisconsin-Whitewater in physical education in 1998. He earned his master’s in curriculum and instruction in 2004.

Simpson and his wife, Nicole, have three children: Jarryn, Riley and Noah.